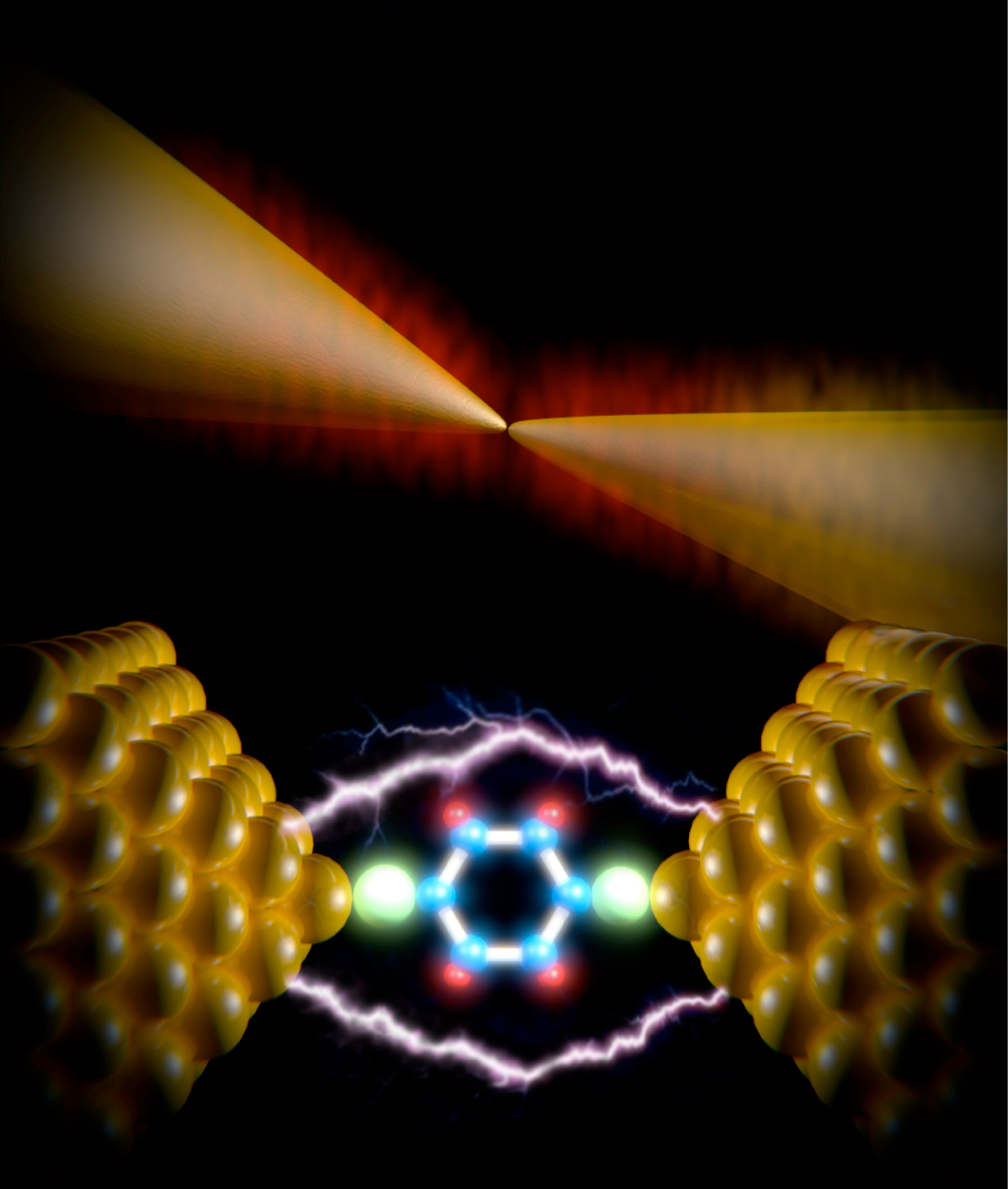 An artist’s representation of atomic-scale heat dissipation, which poses a serious obstacle to the development of novel nanoscale devices. University of Michigan engineering researchers have, for the first time, established a general framework for understanding heat dissipation in several nanoscale systems. Image credit: Enrique Shagun, ScixelANN ARBOR—In findings that could help overcome a major technological hurdle in the road toward smaller and more powerful electronics, an international research team involving University of Michigan engineering researchers, has shown the unique ways in which heat dissipates at the tiniest scales.

A paper on the research is published in the June 13 edition of Nature.

When a current passes through a material that conducts electricity, it generates heat. Understanding where the temperature will rise in an electronic system helps engineers design reliable, high-performing computers, cell phones and medical devices, for example. While heat generation in larger circuits is well understood, classical physics can’t describe the relationship between heat and electricity at the ultimate end of the nanoscale—where devices are approximately one nanometer in size and consist of just a few atoms.

“At 20 or 30 nanometers in size, the active regions of today’s transistors have very small dimensions,” Reddy said. “However, if industry keeps pace with Moore’s law and continues shrinking the size of transistors to double their density on a circuit then atomic-scales are not far off.

“The most important thing then, is to understand the relationship between the heat dissipated and the electronic structure of the device, in the absence of which you can’t really leverage the atomic scale. This work gives insights into that for the first time.”

Research team (Right to left): Woochul Lee, Kyeongtae Kim, Wonho Jeong, and Pramod ReddyThe researchers have shown experimentally how an atomic-scale system heats up, and how this differs from the process at the macroscale. They also devised a framework to explain the process.

In the tangible, macroscale world, when electricity travels through a wire, the whole wire heats up, as do all the electrodes along it. In contrast, when the “wire” is a nanometer-sized molecule and only connecting two electrodes, the temperature raises predominantly in one of them.

“In an atomic scale device, all the heating is concentrated in one place and less so in other places,” Reddy said.

In order to accomplish this, researchers in Reddy’s lab—doctoral students Woochul Lee and Wonho Jeong and post-doctoral fellow Kyeongtae Kim—developed techniques to create stable atomic-scale devices and designed and built a custom nanoscale thermometer integrated into a cone-shaped device. Single molecules or atoms were trapped between the cone-shaped device and a thin plate of gold to study heat dissipation in prototypical molecular-scale circuits.

“The results from this work also firmly establish the validity of a heat-dissipation theory that was originally proposed by Rolf Landauer, a physicist from IBM,” Reddy said. “Further, the insights obtained from this work also enable a deeper understanding of the relationship between heat dissipation and atomic-scale thermoelectric phenomena, which is the conversion of heat into electricity.”

Researchers from the Universidad Autónoma de Madrid in Spain and the University of Konstanz in Germany also contributed to the work.