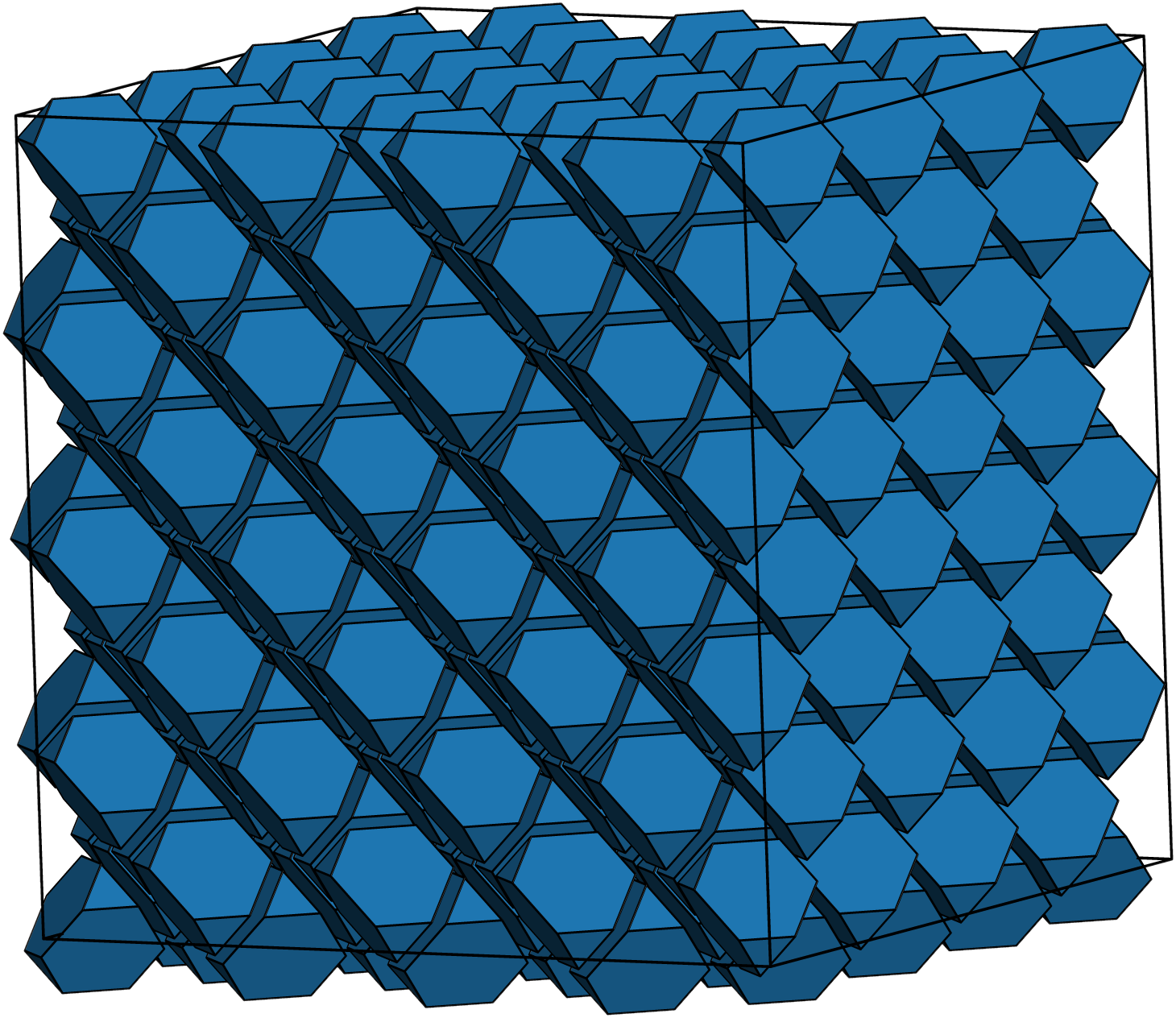 In the computer simulation, shapes are set into a structure. Then, the simulation changes the shapes until they naturally form that structure. Image credit: Greg van Anders, Glotzer Lab, University of MichiganANN ARBOR—Alchemy left the mainstream centuries ago, but one of its core concepts, transmuting the elements, is experiencing a revival in nanotechnology.

Researchers at the University of Michigan are charting a path toward materials with new properties by cleverly altering the nanoparticles used to build them.

“Today, scientists achieve something akin to alchemy when we change materials’ building blocks by adding atoms or molecules to them, or even changing their shape. Such changes affect how the building blocks fit together, which in turn controls material’s behavior and properties,” said Sharon Glotzer, the John Werner Cahn Distinguished University Professor of Engineering and the Stuart W. Churchill Collegiate Professor of Chemical Engineering.

“We’ve developed a new theoretical tool that can be used by computers to carry out ‘alchemy’ on the fly, rapidly searching for the best building block for a given application. Digital alchemy will transform the way we design materials.”

These four-sided pyramids, or tetrahedra, produce a diamond structure when their points are cut off. Image credit: Greg van Anders, Glotzer Lab, University of MichiganNanoparticles have the potential to redefine the “elements” available to materials scientists, going from the 90 stable elements to an infinite palette of tiny synthetic particles, just a few hundred times the size of the atoms themselves. The researchers propose a way to navigate the new frontier of nanoscale building blocks not by making and measuring each particle, but by exploring why particles build certain types of structures. Then, the important attributes can be identified and applied to design particles that will produce those structures.

“It seems like having an infinitude of new ‘elements’ to make materials from is a great thing. But if we don’t know the rules they use to organize themselves, and we can’t determine the rules by trial and error because we can’t make all the different elements, then we need to approach developing materials in a new way,” said Greg van Anders, a research fellow in the Glotzer group and first author of the study.

“Rapidly scanning through building blocks is not just a useful way of finding good candidates for new materials, but a necessary step to deal with the tremendous flexibility we now have in making particles.”

To demonstrate the concept, the team used a computer simulation that arranged a set of particles into a structure and then allowed the shape of the particles to change.

“We just stick the particles into a structure and say ‘find a shape that you’re happy with if you have to sit in that structure,'” van Anders said.

It had been assumed that the best shape for self-assembling into a particular structure is the one that packs into that structure most efficiently, leaving very little empty space. To test this, the team simulated the self-organization of four-sided pyramids (known as tetrahedra). They pack efficiently into a diamond structure—the structure produced by carbon atoms in a diamond—if their points are cut off. But if the diamond structure is the goal, how much of the points should be removed?

Not as much as needed for the closest packing, van Anders said. The shapes self-assembled best if the points were left a little longer, better preserving the tetrahedral character.

The team also explored what happens when ripples of attraction and repulsion run through a collection of spherical particles. This causes the particles to arrange themselves with respect to their neighbors. When these ripples are timed in a certain way, the particles form an icosahedral quasicrystal, an intricate structure that is symmetrical but doesn’t have a repeating structural unit.

This could help researchers build structures by exposing a fluid containing nanoparticles to forces such as light, electric fields and magnetic fields. These capabilities could lead to many interesting advances. One of Glotzer’s particular interests is in materials that can change color on command, creating the ultimate camouflage.

The study, “Digital Alchemy for Materials Design: Colloids and Beyond,” appears in the journal ACS Nano. It was supported by the U.S. Army Research Office and the Department of Energy.