Part of the upper, outer surface of the tusk base, surrounded by modeling clay in preparation for pouring a silicone mold. At center-left is a group of deep, parallel, transverse marks made with a stone tool as part of the tusk removal process. Diagonal marks to the left and right of cut marks were made by bone fragments caught in the space between the tusk surface and the alveolar bone, when the tusk was rotated back and forth while attempting to withdraw it from the socket. Image credit: Daniel C. Fisher, University of Michigan Museum of PaleontologyANN ARBOR—The discovery of stone tools found in a Florida river show that humans settled the southeastern United States far earlier than previously believed—perhaps by as much as 1,500 years, according to a team of scientists that includes a University of Michigan paleontologist.

Michael Waters of Texas A&M University and Jessi Halligan of Florida State University led a research team that also included U-M’s Daniel Fisher and scientists from the University of Minnesota, University of Texas, University of Arizona, Stafford Research Laboratories in Colorado, Aucilla Research Institute in Florida, and Exeter and Cambridge universities in the United Kingdom.

A report on the team’s findings was published online May 13 in Science Advances.

The researchers excavated the Page-Ladson site near Tallahassee, an archaeological site that is 26 feet underwater in a sinkhole on the Aucilla River. It was named Page-Ladson after Buddy Page, a former Navy Seal diver who first brought the site to the attention of archaeologists, and the Ladson family, owners of the property.

The site was first investigated from 1987 to 1997 by James Dunbar and David Webb. But their original findings, which included eight stone tools and a mastodon tusk with apparent cut marks, were dismissed. 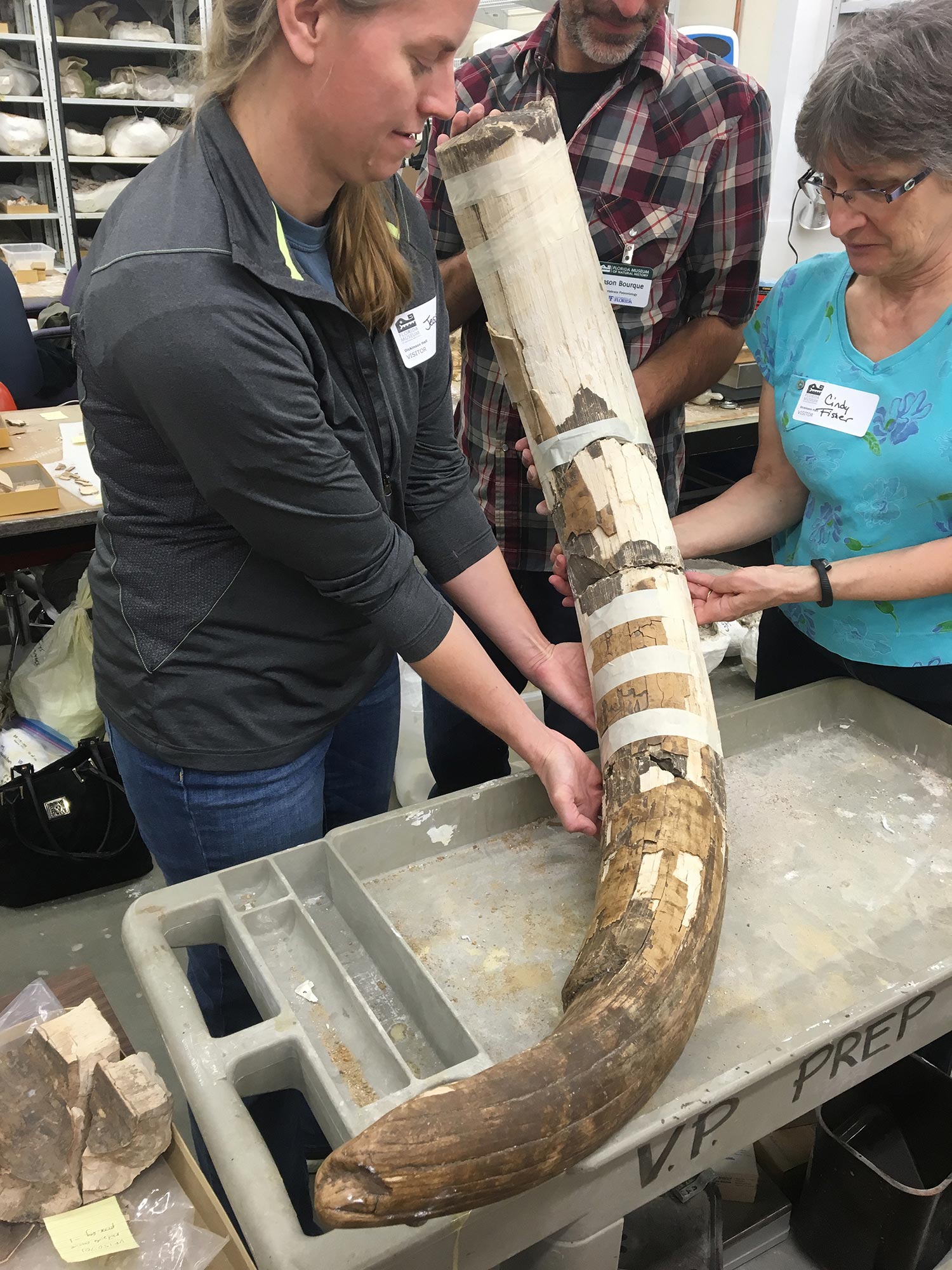 Partly reassembled mastodon tusk from the Page-Ladson site in northwestern Florida. Curvature and size show this is an upper left tusk of a mature male mastodon. Tusk pieces held in place by Jessi Halligan of Florida State University (left), with assistance from Jason Bourque and Cynthia Darling-Fisher. Image credit: Daniel C. Fisher, University of Michigan Museum of PaleontologyU-M’s Fisher reassembled and re-examined the tusk and concluded that the original interpretation—that the deep, parallel grooves in the surface of the tusk are cut marks made by humans using stone tools to remove the tusk from the skull—is correct.

“These grooves are clearly the result of human activity and, together with new radiocarbon dates, they indicate that humans were processing a mastodon carcass in what is now the southeastern United States much earlier than was generally accepted,” said Fisher, director of the U-M Museum of Paleontology and a professor in the Department of Earth and Environmental Sciences.

“In addition, our work provides strong evidence that early human hunters did not hunt mastodons to extinction as quickly as supporters of the so-called ‘Blitzkrieg’ hypothesis have argued,” Fisher said. “Instead, the evidence from this site shows that humans and megafauna coexisted for at least 2,000 years.”

Working in near-zero-visibility waters in the murky Aucilla River from 2012 to 2014, the team led by Waters and Halligan excavated stone tools and the bones of extinct animals. The stone tools included a biface, a knife used for cutting and butchering animal meat.

Seventy-one new radiocarbon dates from the Page-Ladson site leave no doubt that the artifacts date to about 14,550 years ago. It’s believed that Clovis hunters—once widely considered the first inhabitants of the Americas—settled in various sites about 13,000 years ago.

“The new discoveries at Page-Ladson show that people were living in the Gulf Coast area much earlier than believed,” said Waters, director of Texas A&M’s Center for the Study of the First Americans. 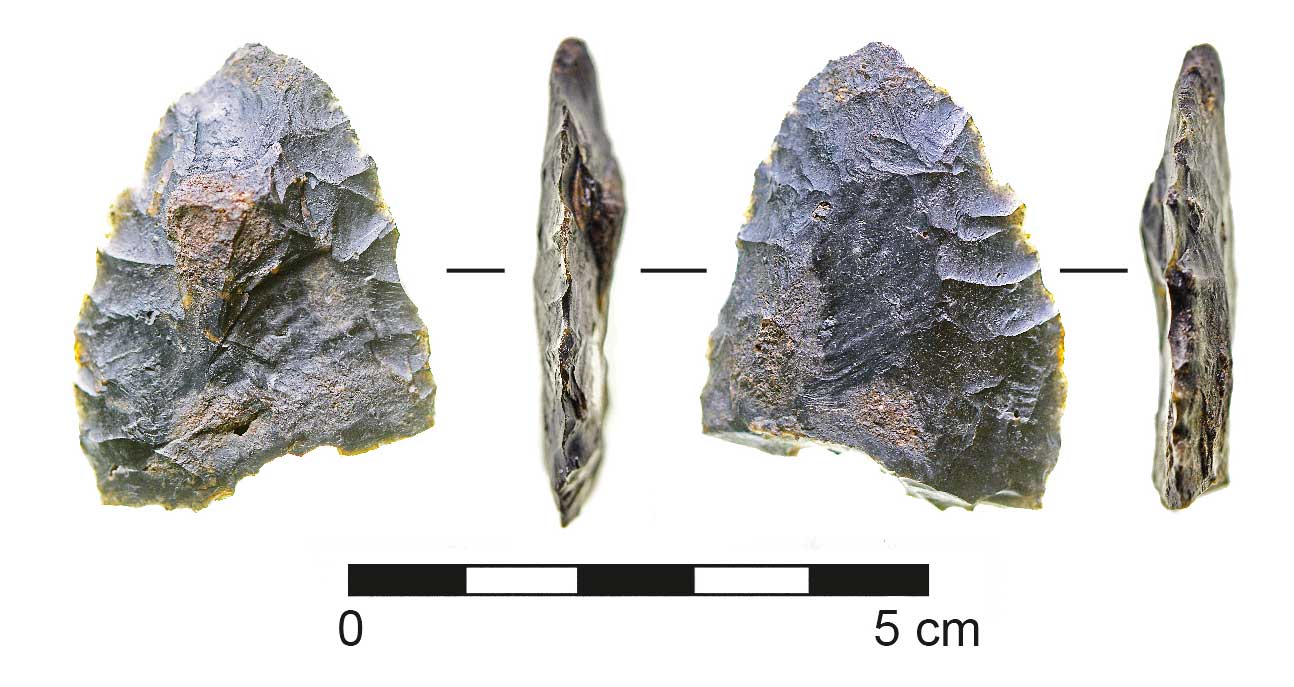 A 12,600-year-old stone knife found at the Page-Ladson site in Florida. Image courtesy: Michael Waters, Texas A&M University“The stone tools and faunal remains at the site show that at 14,550 years ago, people knew how to find game, fresh water and material for making tools. These people were well-adapted to this environment. The site is a slam-dunk pre-Clovis site with unequivocal artifacts, clear stratigraphy and thorough dating.”

Fisher’s re-examination of the mastodon tusk revealed more than a dozen deep, parallel linear grooves on the end of the tusk that attached to the skull. The grooves are perpendicular to the long axis of the tusk. Most are 6 to 8 centimeters long and 1.5 millimeters deep or less.

The tusk may have been removed to gain access to edible tissue at its base, Fisher said.

“Each tusk this size would have had more than 15 pounds of tender, nutritious tissue in its pulp cavity, and that would certainly have been of value,” he said.

Close­up of an epoxy cast of transverse cut marks on the base of the Page-Ladson mastodon tusk. Diagonal feature is a fracture through the outer layer. Image credit: Daniel C. Fisher, University of Michigan Museum of PaleontologyAnother possible reason to extract a tusk is that ancient humans who lived in this same area are known to have used ivory to make weapons, Fisher said.

Tusk roots, like all mammalian tooth roots, are suspended within their socket by a system of fibers called the periodontal ligament.

“It now appears that people were targeting disruption of this tissue when they cut into the side wall of the tusk socket, leaving the set of transverse grooves,” Fisher said.

Fisher has excavated mammoths and mastodons in North America and Siberia and has personal experience with the practicalities of tusk removal. He once removed a tusk from a juvenile woolly mammoth preserved in Siberian permafrost.

That carcass was in a condition similar to a freshly killed animal, he said. Because he needed to avoid unnecessary damage to the specimen, and because he had to improvise methods and tools to get the job done, it took him about eight hours.

“Compared to ancient hunters, I was a novice,” Fisher said. “But I quickly learned that the most important thing was disrupting the ligament fibers holding the tusk in place.”

The Clovis hunters originated south of the large ice sheets that covered Canada at that time and are the direct descendants of the earliest people who arrived in the New World around 15,000 years ago.

“This is a big deal,” Florida State’s Halligan said of the Page-Ladson discoveries. “There were people here. So how did they live? This has opened up a whole new line of inquiry for us as scientists as we try to understand the settlement of the Americas.” 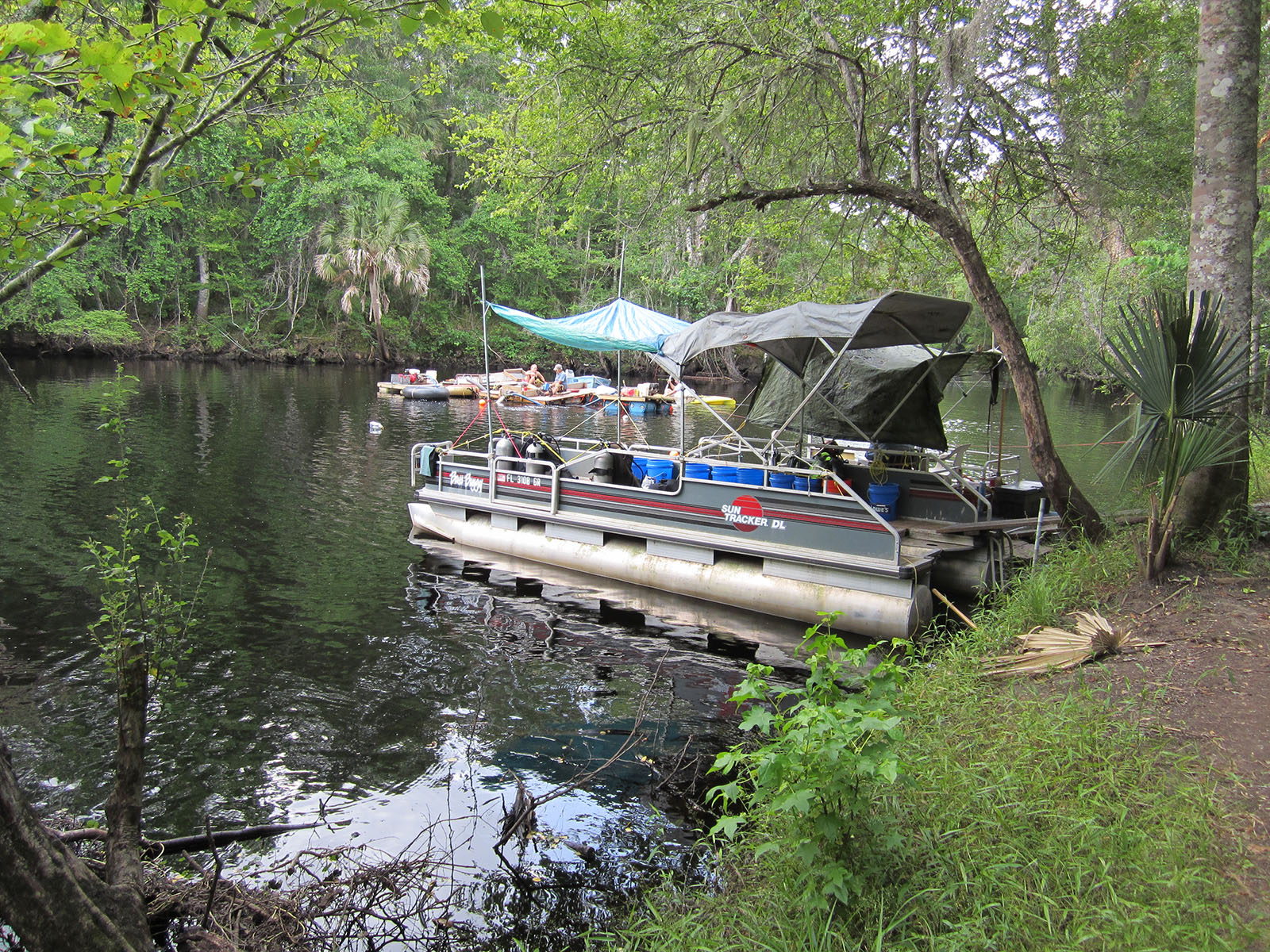 “Page-Ladson significantly adds to our growing knowledge that people were exploring and settling the Americas between 14,000 and 15,000 years ago,” Waters said. “Archaeological evidence from other sites dating to this time period shows us that people were also adapted to living in Texas, Washington, Oregon, Pennsylvania, Wisconsin and South America. Clearly, people were all over the Americas earlier than we thought.”

Additionally, the evidence from Page-Ladson and the other sites shows that people coexisted with and hunted large mammals, such as the mammoth and mastodon, before they became extinct, he said.

Work by Texas A&M graduate student Angelina Perrotti on the dung fungus Sporormiella shows that extinction of the megafauna occurred around 12,600 years ago at the Page-Ladson site, a date that is synchronous with other regions in North America, Waters said.

The project was primarily funded by the North Star Archaeological Research program and Chair in First American Studies at Texas A&M, the Elfrieda Frank Foundation and the National Geographic Society.