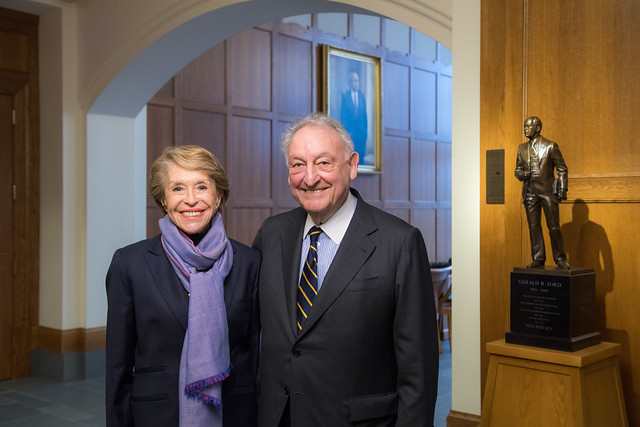 On January 15, 2019, the Ford School had a wonderful opportunity to host Joan and Sandy Weill. During their visit, they met with faculty, staff and students. The Weills have been strong supporters of President Gerald R. Ford’s legacy here at the University of Michigan. Image credit: Michigan Photography

ANN ARBOR—A new $5 million gift from Joan and Sanford Weill’s Family Foundation to the Gerald R. Ford School of Public Policy at the University of Michigan will help bolster education and create workforce opportunities for disadvantaged and underrepresented youth in Detroit.

The gift, announced Tuesday, will be divided into two major parts to provide support for U-M as well as high school students in the state.

Half of the money will be used to create a Youth Fund which will be used to support collaborations with NAF, a national nonprofit organization helping public high school education, to create opportunities for youth in Detroit and its surrounding communities.

The other half will establish the Weill Scholars Fund, which will provide tuition support and stipends for graduate students at the Ford School who come from socio-economically disadvantaged backgrounds and are committed to advancing diversity in public policy.

“Joan and Sandy Weill are passionate about increasing access to education and good jobs for striving low-income students, a problem they’ve been working on for nearly 40 years,” said Michael Barr, dean of the Ford School of Public Policy. “I’m in awe of their commitment, hard work, creativity and generosity.”

“Joan and Sandy Weill’s gift to U-M is a testament to their commitment to preparing the next generation of leaders at all levels, particularly those who need the support most.”
Lisa Dughi

The Weills say that young people have the potential to make an impact with their knowledge and passion and that it’s imperative to ensure that all students have the opportunity to do so.

“We are excited that this agreement brings together one of the most prominent public institutions in the country with one of the most innovative leaders in public high school education—U-M and NAF—to tackle an important public policy issue of our time: educating and preparing the underrepresented to fill the jobs available in today’s new economy,” Joan and Sanford Weill said in a joint statement.

“We look forward to this partnership making a positive difference in the lives of many deserving students in Detroit and the surrounding communities, and supporting the future public policy leaders at the Ford School.”

The Youth Fund will be used to support activities focused on summer camps and academic opportunities for NAF and other Detroit school students to explore science and technology fields and careers and also to engage in college readiness preparation.

It will also provide research, student support, internships and other activities to advance educational access and workforce development.

These initiatives, which will come together as the NAF Future Ready Scholars at U-M, will involve collaborations across campus, including the College of Engineering’s Michigan Engineering Zone, Wolverine Pathways, and the Youth Policy Lab at the Ford School of Public Policy, along with other stakeholders like the Detroit public schools.

“Joan and Sandy Weill’s gift to U-M is a testament to their commitment to preparing the next generation of leaders at all levels, particularly those who need the support most,” said Lisa Dughi, president of NAF. “We are also thankful to U-M for using this opportunity to provide transformative experiences for NAF and other students.”

NAF works with more than 100,000 students in 617 career-themed academies including finance, hospitality and tourism, information technology, engineering, and health sciences in 35 states across the U.S., the District of Columbia and the Virgin Islands. There are more than 20 NAF academies in Detroit.

Ninety-nine percent of NAF’s students graduate, with 87% going on to postsecondary education—often as the first in their families to attend college.

About Joan and Sanford Weill

The Weills were among the original signatories to The Giving Pledge in 2010, a commitment by the world’s wealthiest individuals and families to donate the majority of their wealth to philanthropy.

Previously, the Weills, who have enjoyed a long friendship with President Gerald Ford and Betty Ford, have given to establish Weill Hall—home of the Ford School of Public Policy—and its deanship.

Over the past four decades, the Weills have gifted more than $1 billion to educational, medical, cultural and arts institutions, most recently to Weill Cornell Medicine for debt-free medical education for students who qualify for financial need.