New laser shows what substances are made of; could be new eyes for military

ANN ARBOR—A new laser that can show what objects are made of could help military aircraft identify hidden dangers such as weapons arsenals far below.

“For the defense and intelligence communities, this could add a new set of eyes,” said Mohammed Islam, a professor of electrical engineering and computer science and biomedical engineering at the University of Michigan.

The system, which is made of off-the-shelf telecommunications technology, emits a broadband beam of infrared light. While most lasers emit light of one wavelength, or color, super-continuum lasers like this one give off a tight beam packed with columns of light covering a range of wavelengths – a blend of colors. Because this beam is in the infrared region, it’s invisible to human eyes. But it can illuminate deep information. 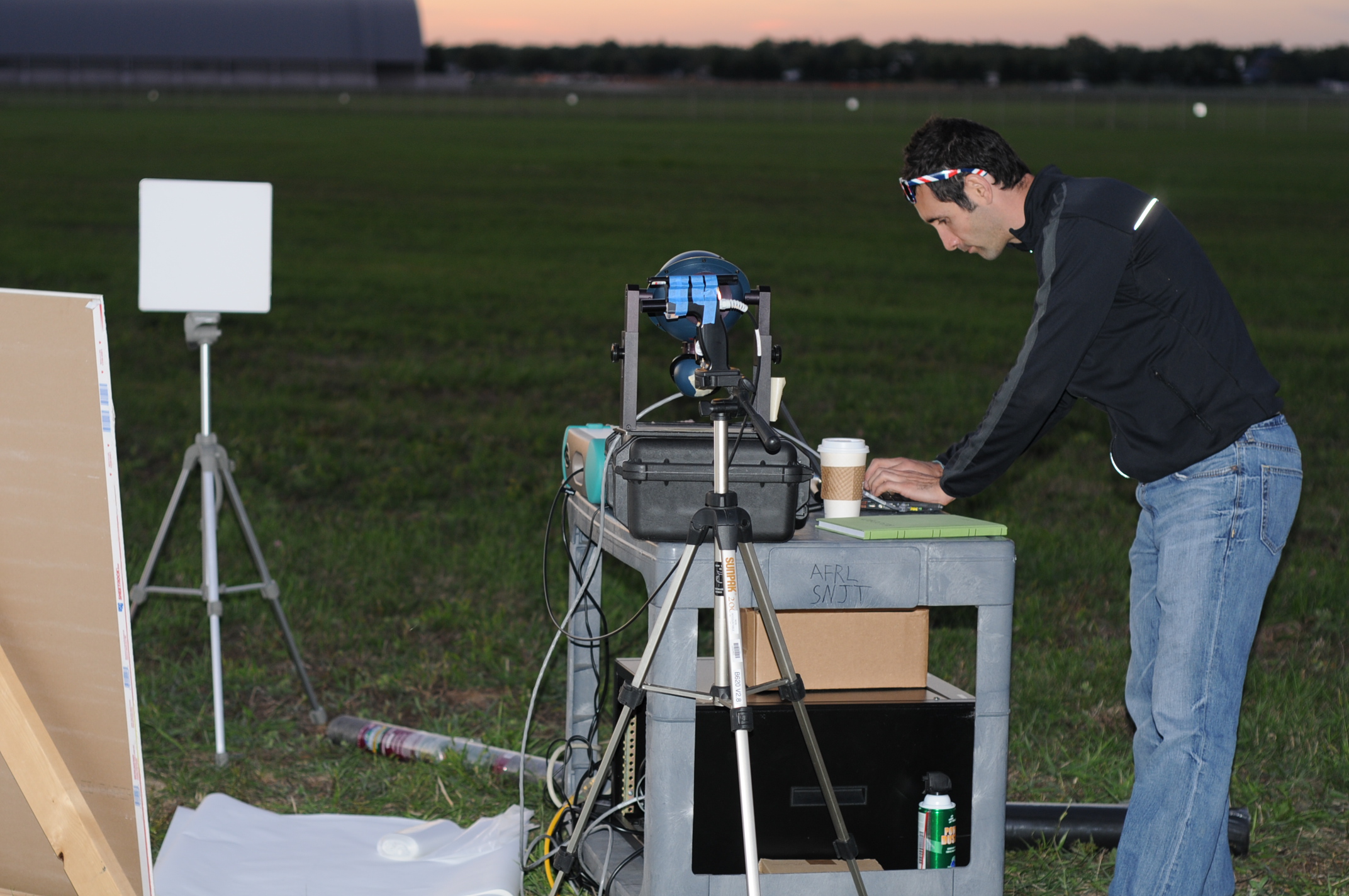 Joseph Meola of Air Force Research Labs conducting measurements on laser light bounced back from various samples placed 1.6 kilometers on the ground from a prototype laser at Wright Patterson Air Force Base. Image credit: Anthony Absi, Air Force Research LabsThe infrared contains what scientists refer to as the “spectral fingerprinting range” – frequencies at which they can detect echoes of the vibrations of the molecules that make up a solid substance. A substance’s spectral fingerprint reveals which wavelengths of light it absorbed, and which it reflected. Different substances absorb and reflect different wavelengths. So by shining the new laser on a target and analyzing the reflected light, the researchers can tell the chemical composition of the target.

“A grey structure looks grey in visible light, but in the infrared, you can see not only the shape, but also what’s inside it,” Islam said.

The military uses spectral fingerprinting to identify targets today to a certain extent, Islam said. But it relies on the sun for the light, which can be a problem on a cloudy day or at night.

While broadband infrared lasers do exist, this one is more powerful, Islam said. His team tested a 5-watt prototype. They’ve built a 25.7 watt version. And they’re now working on a 50-watt prototype, which is scheduled to be field tested later this year.

These higher power lasers could give an aircraft flying at higher altitudes the capacity to illuminate a region with a brightness comparable to sunlight, and then image that region. Many chemical sensors in use today work at close range, but few, if any, can do the job from a long distance.

Beyond military applications, this device has the potential to improve upon today’s full-body airport screening technologies. 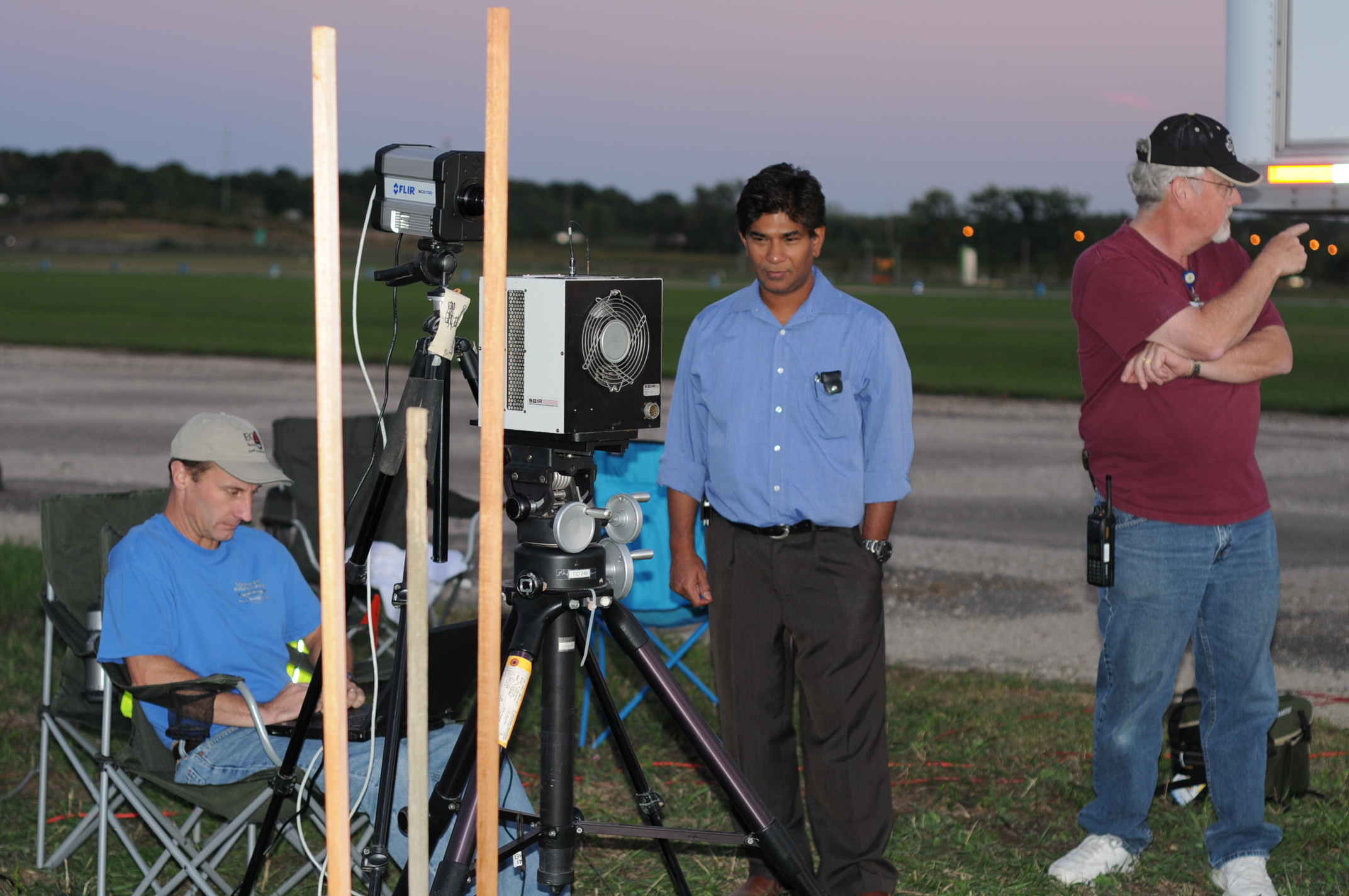 Jerome Zadnik, of EOIR Technologies and the National Geospatial Intelligence Agency; professor Mohammed Islam, of the University of Michigan and Omni Sciences, Inc.; and Bruce Smotherman, SAIC and Air Force Research Labs, conduct experiments with the laser using cameras and other diagnostic equipment at Wright Patterson Air Force Base. Image credit: Anthony Absi“Those are imaging devices looking for bumps where there shouldn’t be bumps,” Islam said. “They’re looking for shapes that are odd or different. But they can’t see the chemicals in the shapes. That’s why you have to take your shoes off. But our laser can detect the chemical composition.”

The researchers were able to build the laser using their patented approach that uses off-the-shelf telecom fiber optic technology and takes advantage of the natural physics of the fiber to generate the light.

In 2012, the team spent a week at Wright Patterson Air Force Base field testing a 5-watt prototype. Scientists and engineers from these entities attended: the Air Force Research Labs, SAIC, U-M spinout company Omni Sciences, and U-M. They placed the laser in a 12-story tower and directed its beam to targets approximately a mile away on a runway. Various laboratory instruments and scientific cameras were used to verify the beam quality and signal level.

A paper on the research is published online in Optics Letters and will appear in the July print edition.

The paper is titled, “Power scalable >25W supercontinuum laser from 2-2.5 μm with near diffraction limited beam and low output variability.” Omni Sciences, Inc. has licensed Islam’s technology from the University of Michigan. Islam has a financial interest in this company. The work was funded through a contract with the Air Force Research Laboratory.