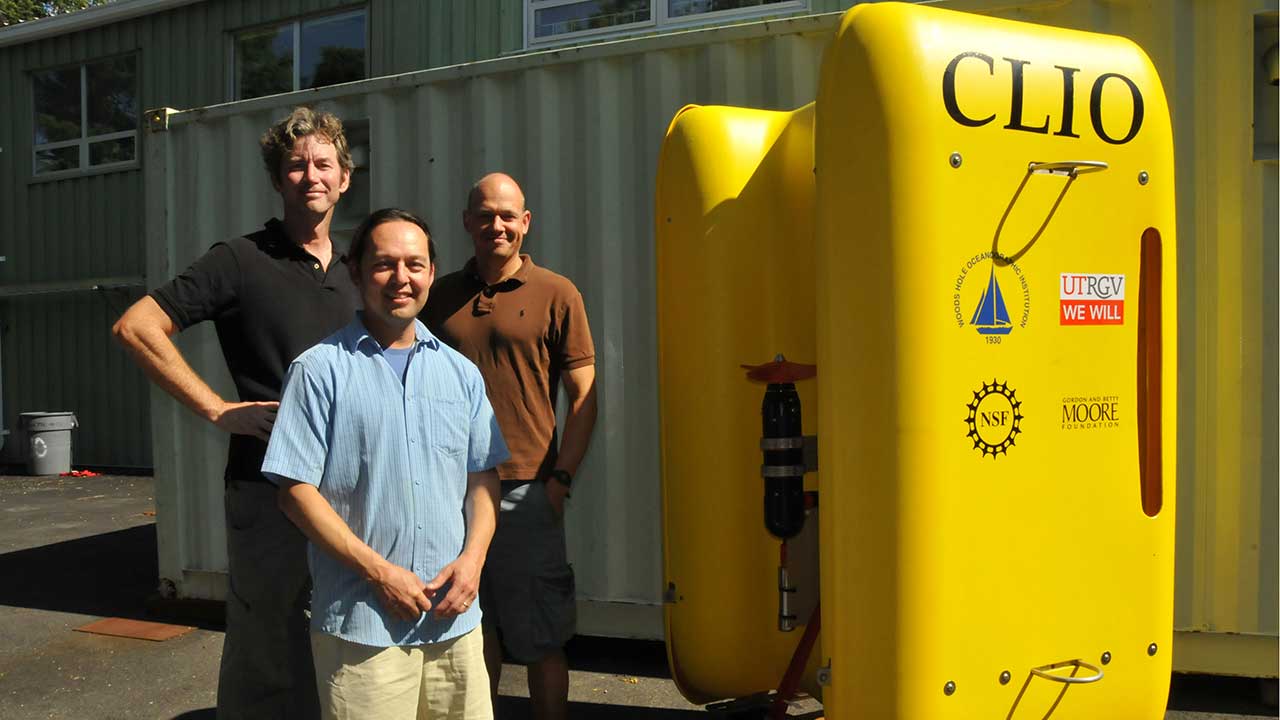 Developed in an engineering collaboration between Woods Hole Oceanographic Institution and the University of Texas Rio Grande Valley and in scientific collaboration with the University of Michigan, Clio will improve sampling efficiency and also reduce the time and cost of broad biogeochemical surveys, which are necessary to understand patterns and cycles of the marine food web and the role that the ocean plays in shaping Earth’s climate.

“This new research tool will enable us to more quickly and efficiently collect the samples we need to understand how microbes mediate the cycling of elements, such as carbon, in the oceans,” said U-M marine microbiologist Gregory Dick, a member of the team.

“We want to know, for example, how ocean microorganisms are going to respond to global changes including rising temperatures, increasing concentrations of atmospheric carbon dioxide, and increasing ocean acidity,” said Dick, an associate professor in the U-M Department of Earth and Environmental Sciences and in the Department of Ecology and Evolutionary Biology.

“The long-term goal of Clio is to lower the barriers to completing a global survey of marine microbiology and biochemistry,” said John “Chip” Breier, chief scientist of the sea trials and lead principal investigator of the project from the University of Texas Rio Grande Valley. “Ultimately, the vehicle’s capabilities will greatly expand the observational capacity of our oceanographic research fleet.” 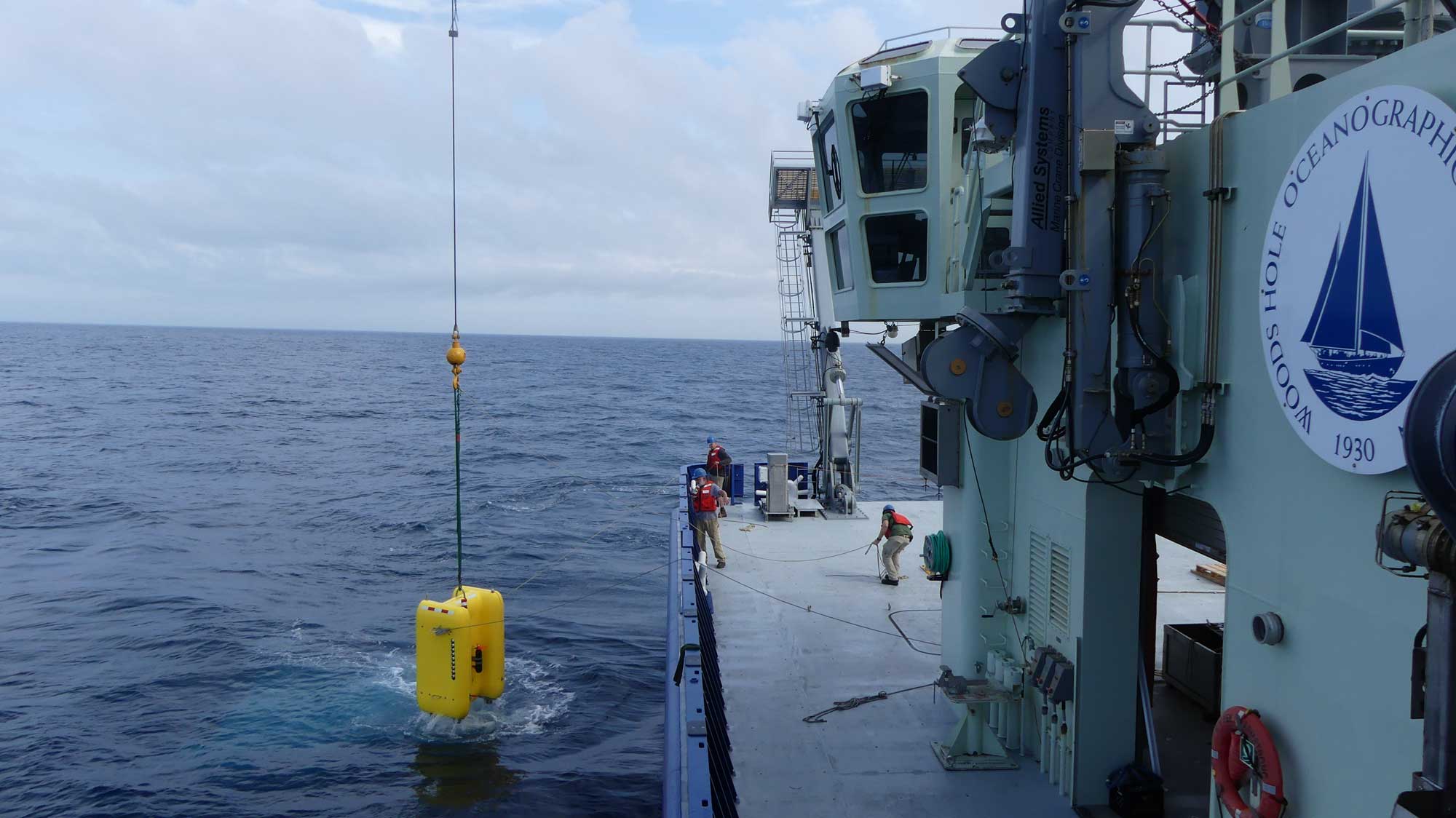 The crew aboard the R/V Neil Armstrong helps guide Clio into the water for tests at sea. During the expedition, Clio completed five dives, including two dives to 2,000 meters (1.2 miles), and filtered more than 1,000 liters (264 gallons) of se awater from nine different depths. Image credit: Mak Saito, Woods Hole Oceanographic InstitutionOnce lowered off a ship, the vertical-diving Clio propels itself to the bottom of the seafloor using a pair of thrusters and then stops at a series of pre-programmed depths during its ascent to filter water and collect samples.

U-M doctoral student Sharon Grim participated in the July 9 sea trial and brought back samples that will be analyzed in Dick’s lab. DNA and RNA will be extracted and sequenced. The researchers are interested in all marine microorganisms, including bacteria, archaea and microbial eukaryotes, as well as the viruses that infect them.

“Clio sampled for microbes at programmed depths by filtering the seawater,” Grim said. “Once it was back on the ship, we recovered the filters and will extract and sequence nucleic acids from them.

“This analysis will give us the big picture of the microbial types, potential metabolisms, and activities in the water column. Then we can link this microbial snapshot with the nutrients, trace metals and proteins we also collected to understand the role of microbes in global element cycling.” 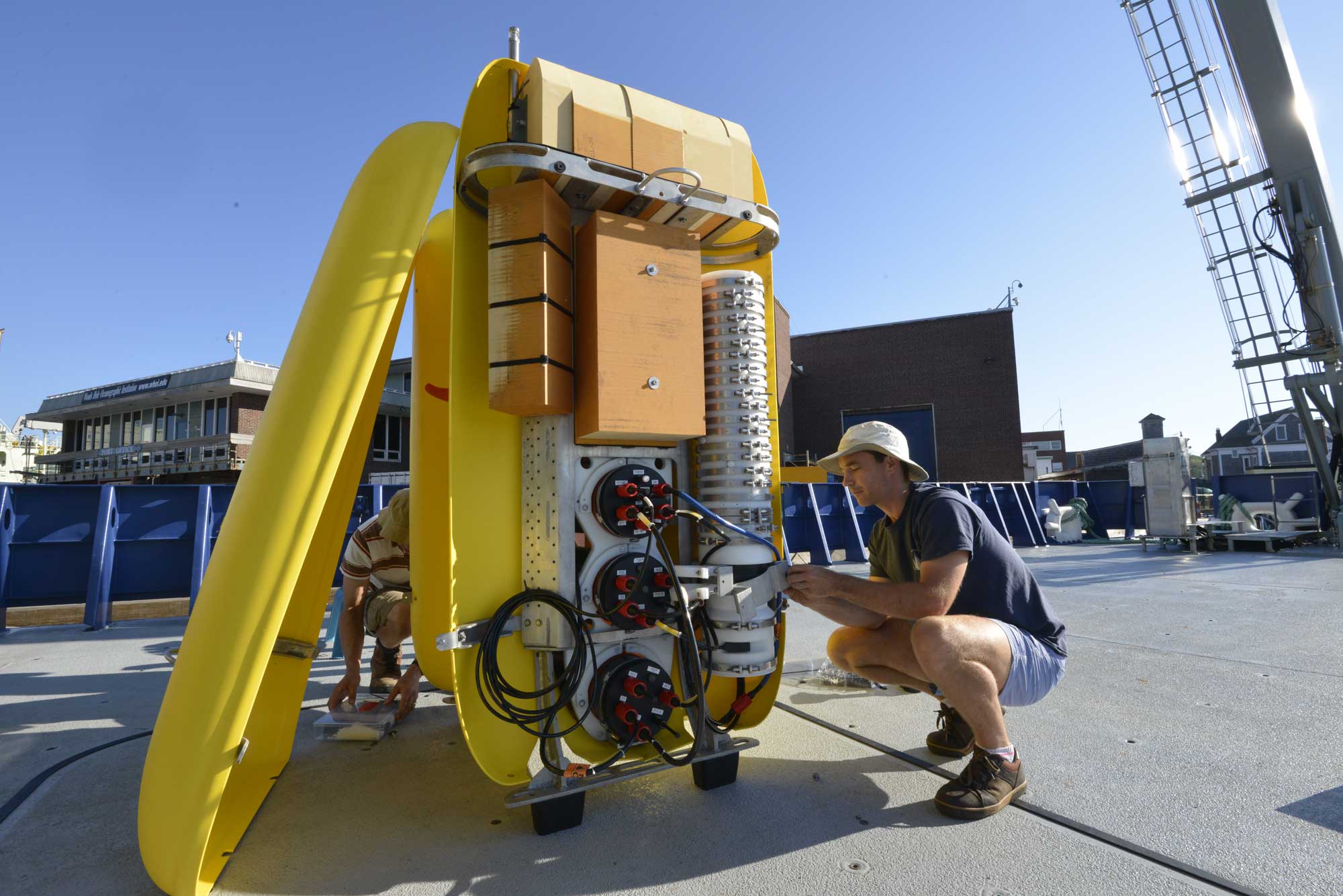 WHOI engineers Mike Jakuba (left) and Daniel Gomez-Ibanez (right) put the finishing touches on the AUV Clio before securing the vehicle’s outer skins and heading out for sea trials off the coast of New England. Image credit: Ken Kostel, Woods Hole Oceanographic InstitutionThe autonomous underwater vehicle, or AUV, is roughly the size of a large refrigerator, can dive to a maximum depth of 6,000 meters (3.7 miles) and can operate underwater for 12 to 14 hours at a time. Clio then returns to the surface with stacks of filters representing 100s of liters of seawater that oceanographers can use to measure the genetic and functional diversity of marine microorganisms, as well as nutrients that control their diversity.

“As an AUV, Clio occupies a unique design space,” said Mike Jakuba, lead engineer at WHOI and a principal investigator on the project. “AUVs are typically designed to travel horizontally along the seafloor and to survey at a relatively constant depth. By contrast, Clio must travel vertically in the water and sample for long periods of time at many depths separated by hundreds to thousands of meters.”

Currently, researchers gather these types of marine samples by using battery-operated pumps, lowered down to various ocean depths on a wire. The pumps suck seawater through a filter that captures particles. When the pumps are back on deck, the heads containing the filters are removed and brought to a lab for analysis.

On major expeditions that survey across entire ocean basins, Clio can be in the water performing a survey, while other researchers can concurrently take separate sets of samples using the wire system.

To demonstrate this capability during sea trials earlier this month aboard the R/V Neil Armstrong, the cruise science party deployed a standard wire-mounted oceanographic instrument known as a CTD rosette, which measures conductivity, temperature, and depth, while Clio simultaneously filtered samples at depth a few hundred meters away. 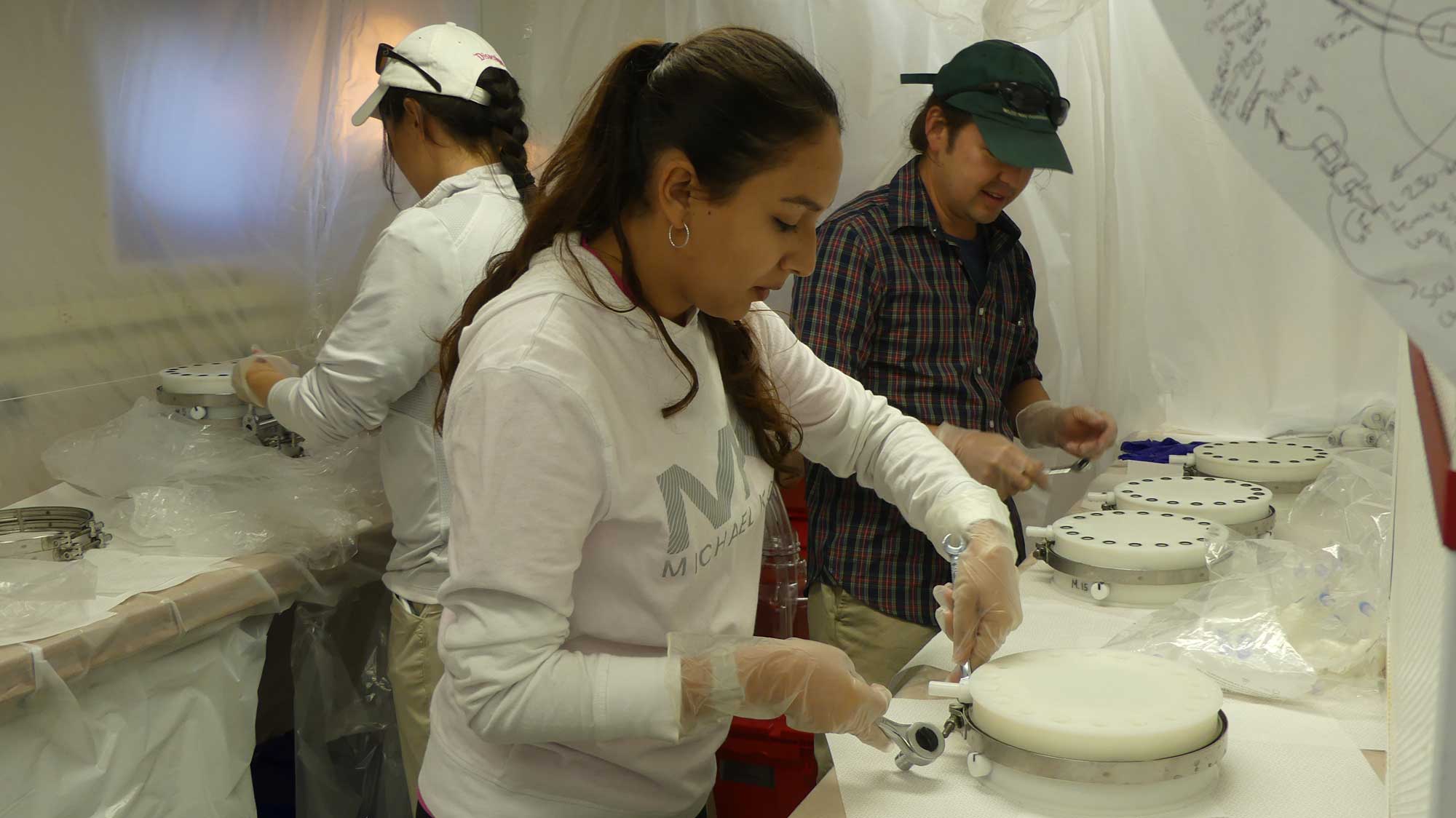 “From the sampling perspective, we had to design a system that was versatile enough to meet the scientific needs of a wide community, simple enough to operate rapidly and with little training, and compact enough to fit in the AUV—a challenge to be sure,” said Breier, an associate professor at the University of Texas Rio Grande Valley and adjunct scientist at WHOI.

Team members hope that surveys by Clio can be used to expand existing sampling efforts, such as the long-running GEOTRACES study—an international effort to measure and study a wide spectrum of elements, isotopes, and chemicals in the ocean—by providing a biological and biochemical counterpart.

“One of the really exciting things is that Clio provides the type of biomass samples needed for the new ‘omics’ approaches to measuring cellular molecules, such as genomics, proteomics, and metabolomics,” said Mak Saito, a biogeochemist at the Woods Hole Oceanographic Institution and one of the Clio principal investigators.

By analyzing the biomass Clio collects, scientists can tell what’s living in the water and the nutrients they are using to perform biological functions, and also learn more about the ocean microbiome—the microbial system that helps drive life processes and elemental cycling on Earth.

Next up, Clio will undergo a year of science testing in Bermuda beginning in April 2018. Funding for the design and development of Clio was provided by the National Science Foundation’s Ocean Technology and Interdisciplinary Coordination Program and the Gordon and Betty Moore Foundation.