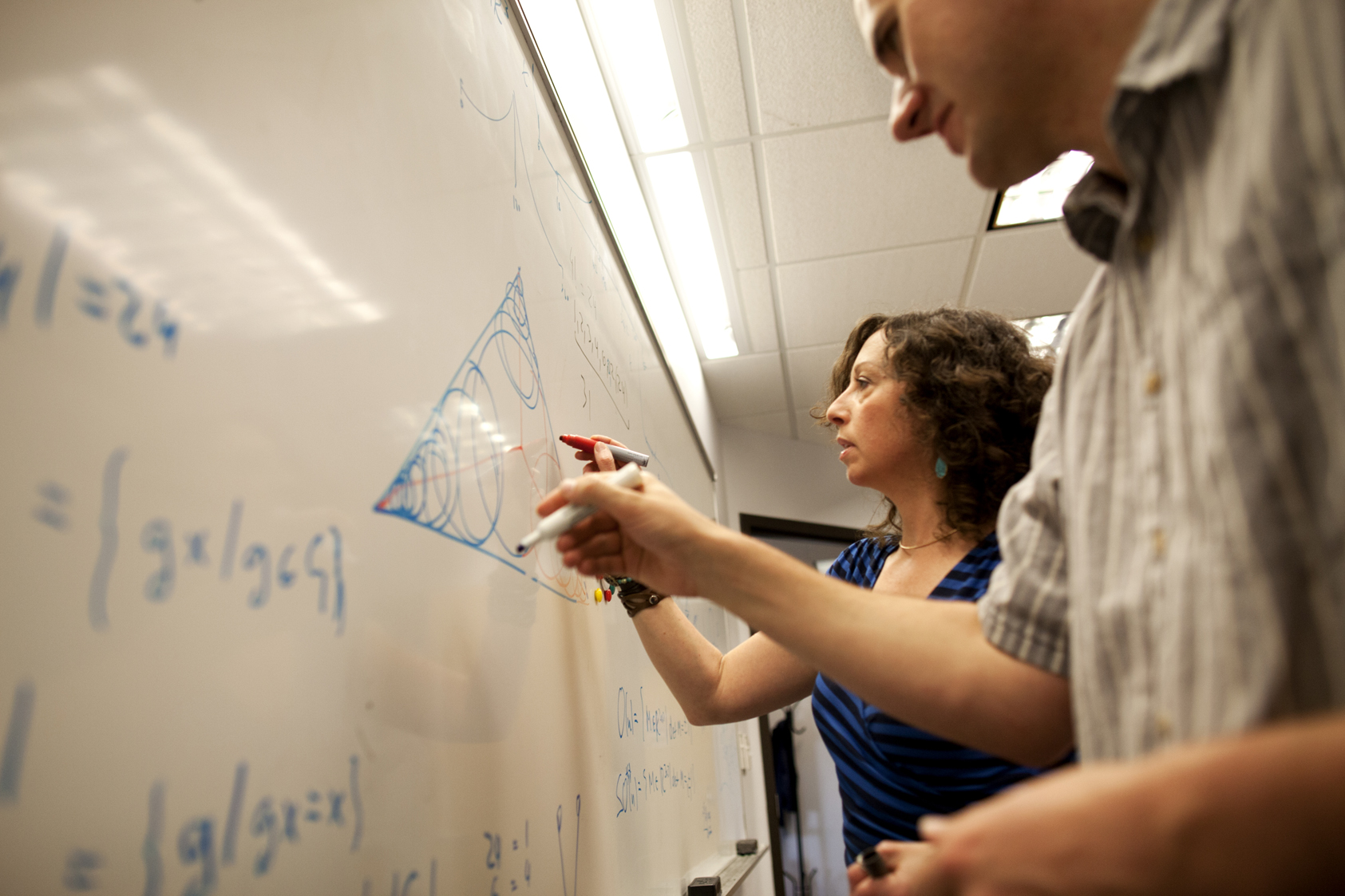 Joshua Anderson (right) and Sharon Glotzer, members of The Glotzer Group in the Laboratory for Computational Nanoscience & Soft Matter, demonstrate their new mathematical problem: the best way to fill a space with overlapping shapes while respecting the boundary. Image credit: Joseph Xu, College of EngineeringANN ARBOR—A hidden facet of a math problem that goes back to timeworn Sanskrit manuscripts has just been exposed by nanotechnology researchers at the University of Michigan and the University of Connecticut.

It turns out we’ve been missing a version of the famous “packing problem,” and its new guise could have implications for cancer treatment, secure wireless networks, microelectronics and demolitions, the researchers say.

Called the “filling problem,” it seeks the best way to cover the inside of an object with a particular shape, such as filling a triangle with discs of varying sizes. Unlike the traditional packing problem, the discs can overlap. It also differs from the “covering problem” because the discs can’t extend beyond the triangle’s boundaries.

“Besides introducing the problem, we also provided a solution in two dimensions,” said Sharon Glotzer, U-M professor of chemical engineering.

That solution makes it immediately applicable to treating tumors using fewer shots with radiation beams or speeding up the manufacturing of silicon chips for microprocessors.

The key to solutions in any dimension is to find a shape’s “skeleton,” said Carolyn Phillips, a postdoctoral fellow at Argonne National Laboratory who recently completed her Ph.D. in Glotzer’s group and solved the problem as part of her dissertation.

“Every shape you want to fill has a backbone that goes through the center of the shape, like a spine,” she said.

For a pentagon, the skeleton looks like a stick-drawing of a starfish. The discs that fill the pentagon best will always have their centers on one of those lines.

Junctions between lines in the skeleton are special points that Glotzer’s team refers to as “traps.” The pentagon only has one trap, right at its center, but more complicated shapes can contain multiple traps. In most optimal solutions, each trap has a disc centered over it, Phillips said.

Other discs in the pattern change size and move around, depending on how many discs are allowed, but those over the traps are always the same. Phillips suspects that if a design uses enough discs, every trap will have a disc centered over it.

In their paper, published online today in Physical Review Letters, the researchers report the rules for how to find the ideal size and spacing of the discs that fill a shape. In the future, they expect to reveal an algorithm that can take the desired shape and the number of discs, or the shape and percentage of the area to be filled, and spit out the best pattern to fill it.

Extending the approach into three dimensions, Glotzer proposes that it could decide the placement of wireless routers in a building where the signal must not be available to a potential hacker in the parking lot. Alternatively, it could help demolition workers to set off precision explosions, ensuring that the blast covers the desired region but doesn’t extend beyond a building’s outer walls.

Phillips expects filling solutions to be scientifically useful as well. Glotzer’s team developed the new problem by trying to find a way to represent many-sided shapes for their computer models of nanoparticles. In addition to nanotechnology, biology and medicine often need models for complex shapes, such as those of proteins.

“You don’t want to model every single one of the thousands of atoms that make up this protein,” Phillips said. “You want a minimal model that gives the shape, allowing the proteins to interact in a lock-and-key way, as they do in nature.”

The filling approach may prove a perfect fit for a variety of fields.