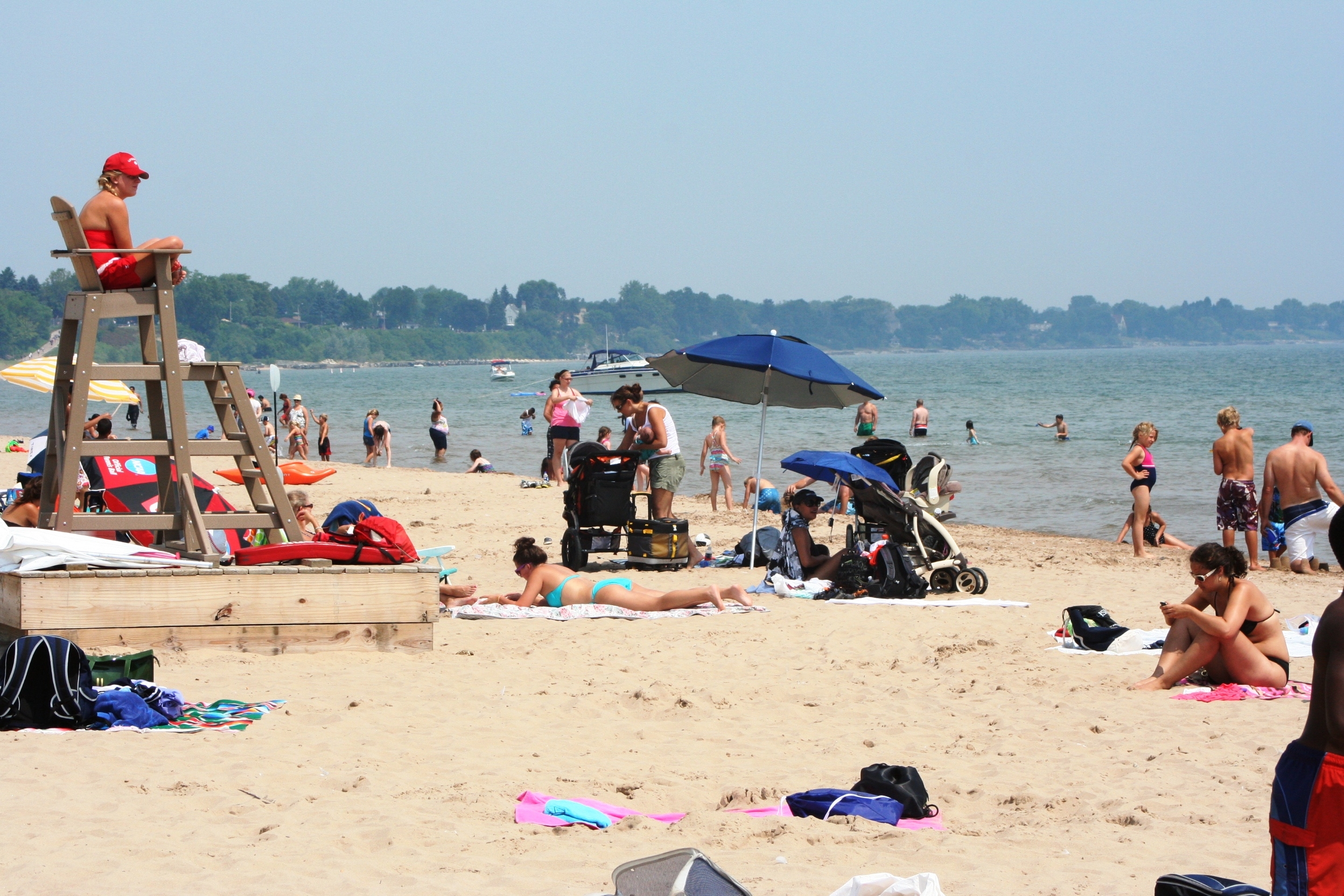 North Beach in Racine, Wis., on Lake Michigan. Image credit: Julie Kinzelman, City of RacineANN ARBOR—Great Lakes beachgoers could spend a lot more time in the water if a beach forecasting tool under development by University of Michigan researchers and their colleagues is adopted throughout the region.

The new forecasting tool would significantly reduce the number of days that Great Lakes beaches are unnecessarily closed to swimming due to inaccurate assessments of E. coli bacteria levels, according to David Rockwell of the U-M School of Natural Resources and Environment.

“My estimate is that 23 percent of the time that swimming is prohibited at Great Lakes beaches due to high bacteria levels, those decisions are actually mistakes,” said Rockwell, beach water quality forecasting coordinator at the Cooperative Institute for Limnology and Ecosystems Research (CILER), a collaboration between the U-M and the National Oceanic and Atmospheric Administration.

“This new tool helps us make better beach-management decisions so we can get the situation called correctly,” Rockwell said. Early testing of the new forecasting tool, which is called the Forecast Decision Support System, showed that it was more accurate than current beach-monitoring techniques about 70 percent of the time, Rockwell said.

The development of the new forecasting model was funded by a $140,000 grant from the Environmental Protection Agency through the federal Great Lakes Restoration Initiative. The project is a joint effort between the University of Michigan and NOAA’s Great Lakes Environmental Research Laboratory in Ann Arbor.

The new forecasting tool is undergoing extensive testing this summer at five Michigan beaches. Using equations generated by the forecast tool, water-quality forecasts for the five beaches are issued four times a day by the National Weather Service. After the swimming season closes, those forecasts will be compared with actual bacterial levels in water samples collected at the beaches throughout the summer to determine the system’s accuracy.

The water-quality forecasts are for North Beach Park and Grand Haven State Park beaches in Ottawa County, Bay County State Recreation Area Beach in Bay County, and Memorial and Metro beaches in Macomb County. The forecasts are provided to the health departments in the three counties. 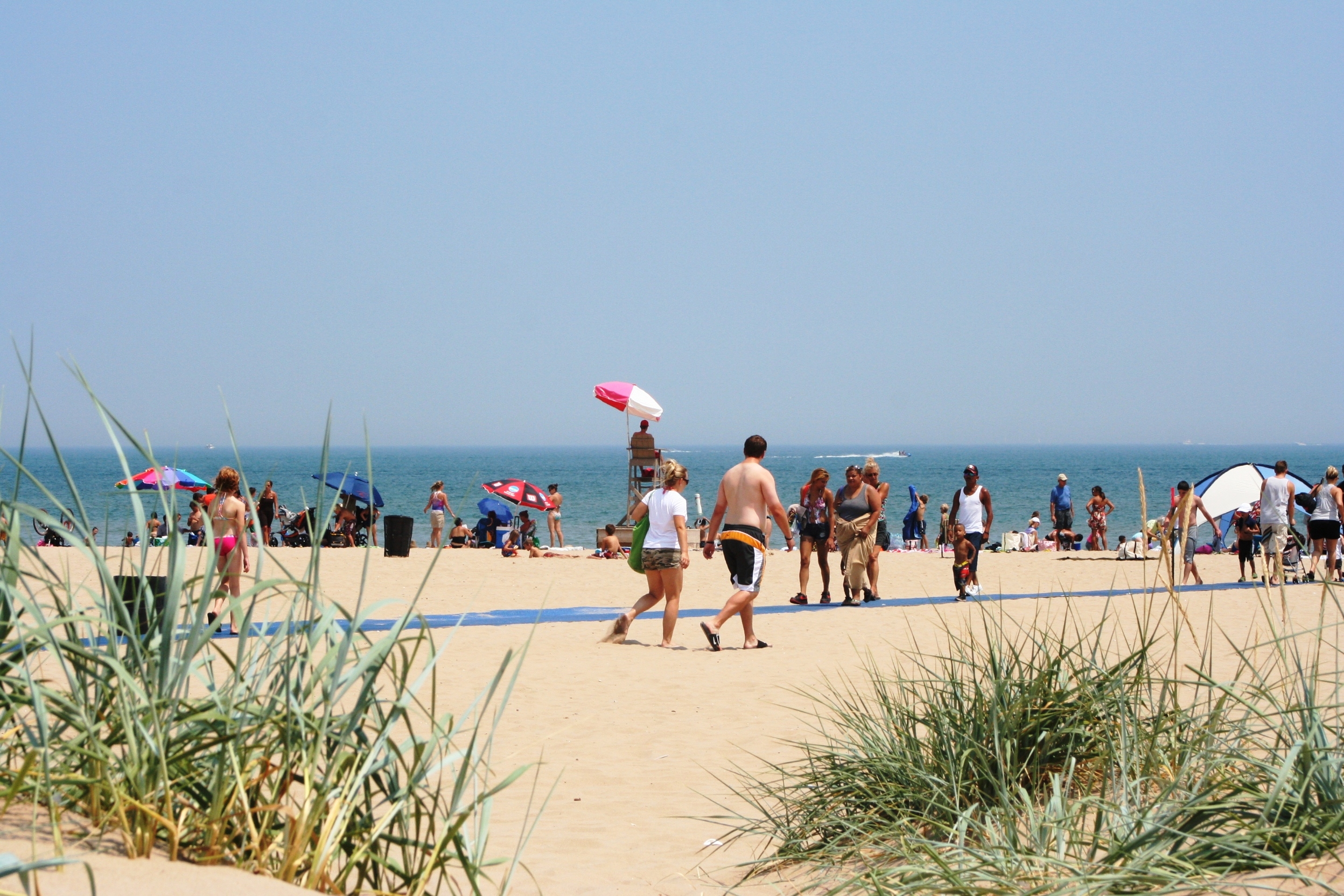 North Beach in Racine, Wis., on Lake Michigan. Image credit: Julie Kinzelman, City of RacineRockwell said the new system could be applied at more than 200 beaches in the Great Lakes region. The improved accuracy of the Forecast Decision Support System would lead to 866 additional swimming days per year across the region, which translates into at least $11.3 million in increased spending by beachgoers, Rockwell said. (The numbers are estimates for the 2010 beach season.)

In 2010, swimming advisories or closures were posted at Great Lakes beaches on 3,136 days. Most often, advisories and swimming closures are issued after heavy rainstorms wash bacteria-contaminated water into lakes.

The standard beach monitoring and notification method, often called the persistence model, is based on laboratory culturing of E. coli colonies from water samples. The colony-culturing technique can take up to 24 hours to complete, which means that swimming advisories and closures are often issued a day or more after a contamination event has occurred. Since bacterial concentrations in water can vary over time periods of less than a day, the persistence model can result in unnecessary advisories or closures.

“In most cases, the bacterial levels have dropped by the next day, yet swimming at the beach remains closed,” Rockwell said. In some cases, the persistence model has been shown to be inaccurate more than half the time in predicting when waters are safe for swimming, he said.

The new Forecast Decision Support System predicts E. coli levels up to 60 hours in advance by looking at nearly 100 environmental variables, Rockwell said. Data on rainfall amounts, cloud cover, wind direction and speed, the direction and speed of currents in the lake and wave heights are fed into an equation that generates an E. coli forecast specific to each beach.

Based on early successes with the Forecast Decision Support System, NOAA recently decided to expand testing of the technique to Lake Superior and Lake Ontario beaches.

“This support system is a wonderful tool for health departments, municipalities and beach managers, reducing the uncertainties and economic impacts of needless beach closures. This success story is only possible because of the U.S. EPA’s funding through the Great Lakes Restoration Initiative,” said CILER Director Allen Burton, a professor at the U-M School of Natural Resources and Environment and principal investigator on the Great Lakes Restoration Initiative grant that funded the beach-forecasting project.