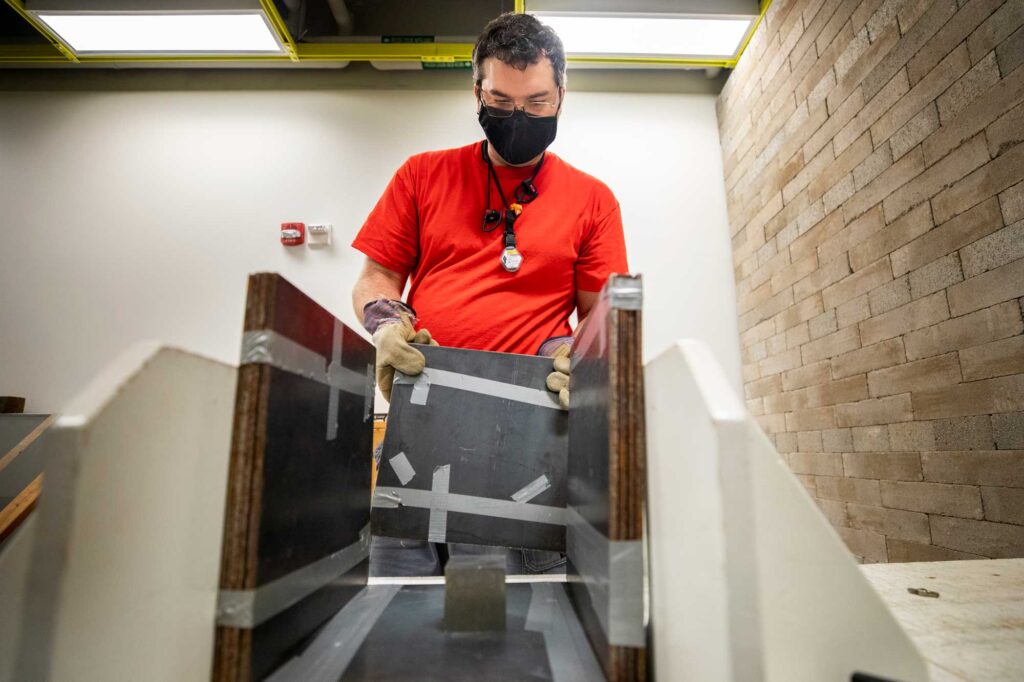 Christopher Meert, a graduate student in nuclear engineering and radiological sciences, arranges the metal shielding that mimics the way weapons-grade uranium and plutonium might be hidden inside shipping containers. During the experiments, he will fire neutrons at material samples inside the box and detect the neutrons and photons when atoms in the sample split, or fission. With a more precise picture of what fissioning uranium and plutonium atoms look like under these conditions, the team will develop algorithms that sift out the noisy data gathered by detectors in the field—to identify the smuggling of materials that could be made into nuclear weapons. Image credit: Robert Coelius, Michigan Engineering

Using neutrons to probe shipping containers could enable better detection of smuggled nuclear materials, but we don’t yet know the signatures that weapons-grade uranium and plutonium will leave in radiation detectors under those conditions.

The Department of Homeland Security is giving researchers at the University of Michigan $1.9 million to find out what to look for when neutrons slip through the shielding around nuclear contraband and induce nuclear reactions.

“Protecting our society from the threats of nuclear smuggling is one of our major challenges today,” said Sara Pozzi, U-M professor of nuclear engineering and radiological sciences, who will lead the research.

The Department of Homeland Security uses radiation detectors to inspect the millions of shipping containers that pass through U.S. ports and border crossings every year. They look for spontaneous radiation emissions from weapons-grade uranium and plutonium, also known as special nuclear materials. But this method doesn’t work well when special nuclear materials are “shielded” inside a heavy material like lead, which is good at absorbing radiation.

“If shielding material is placed around the special nuclear materials then these passive emissions can be difficult—if not impossible—to detect,” said Shaun Clarke, U-M associate research scientist in nuclear engineering and radiological sciences. 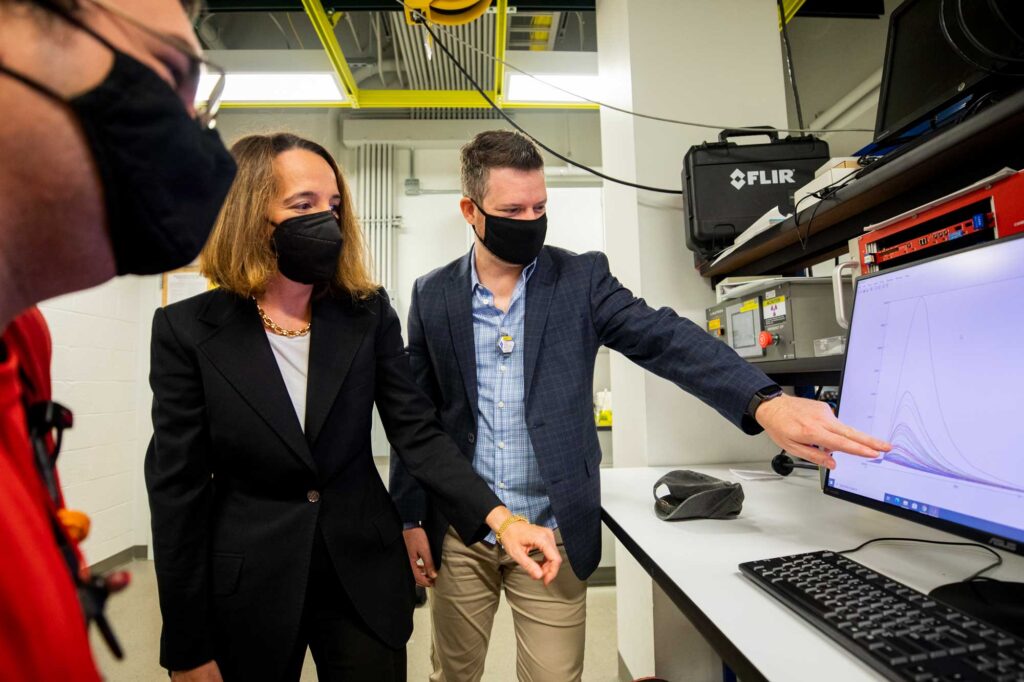 Christopher Meert (left), a graduate student in nuclear engineering and radiological sciences (NERS); Sara Pozzi (middle), a professor of NERS; and Shaun Clarke (right), an associate research scientist in NERS, develop algorithms that sift through the noisy data gathered by detectors. With smaller and more robust neutron sources now feasible for scanning cargo at ports and border crossings, the team’s algorithms may help detect the smuggling of materials that could be made into nuclear weapons. Image credit: Robert Coelius, Michigan Engineering

Instead, the team intends to trigger the unstable uranium and plutonium atoms to split apart, or fission, by shooting neutrons at them. Neutrons are neutral particles that, together with positively charged protons, make up atomic nuclei. However, using radiation in the form of a neutron beam to produce radiation signatures from fission can muddy the signals that the detectors pick up, a problem known as pulse pileup.

“Pulse pileup can result in the desired signatures being buried in the sea of interrogating radiation,” Clarke said. “Effectively, it’s a digital needle in a haystack problem.”

In order to spot that needle, the team needs to develop a very clear picture of what it looks like. During the project, they will induce fission in special nuclear material samples and very carefully detect the neutrons and photons, or particles of light, that the weapons-grade uranium and plutonium emit.

The exact properties of these neutrons and photons—the number emitted, their energy, emission angle, and so on—are still relatively unknown. With a more precise picture of what these needles look like, the team will develop algorithms that sift them out of the noisy data gathered by detectors in the field.

“By analyzing the time-structure of the interrogation beam and radiation detector signals, we will measure the induced neutrons and gamma rays from fission events, which occur when nuclear materials are present,” said Igor Jovanovic, U-M professor of nuclear engineering and radiological sciences and the project co-investigator. “Carefully accounting for this detailed time structure is expected to improve our sensitivity over the methods that are in use today.”

The team has previously explored high-energy photons such as X-rays as well as neutrons generated by larger accelerators for probing the contents of shipping containers to see what radiation emerges. Smaller and more robust neutron sources are now feasible for scanning cargo at ports and border crossings. Neutrons can better penetrate shielding made with denser materials, such as lead, which are typically used to contain the radiation produced by special nuclear materials.

Pozzi also directs the Consortium for Monitoring, Technology and Verification, which brings together 14 universities and 13 national laboratories for the purposes of demonstrating new nuclear safeguards and developing the nuclear security workforce.