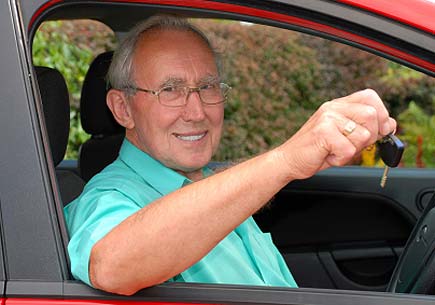 ANN ARBOR—Adults under 50 have long been the ideal target group for advertisers, but when it comes to buying new vehicles, older consumers may be a marketer’s best bet, says a University of Michigan researcher.

Michael Sivak, research professor at the U-M Transportation Research Institute, examined the differences in the probability of licensed drivers purchasing a new light-duty vehicle (car, pickup truck, SUV or minivan) as a function of their age for the years 2007 and 2011.

He found that in 2011, the peak probability of buying a new vehicle per driver was among those between 55 and 64 years of age—a shift from four years earlier that peaked with the 35-to-44-year-old age group.

“There were substantial increases from 2007 to 2011 in the number of drivers 55 to 64 years of age and 65 to 74 years of age,” Sivak said. “This trend likely reflects the aging of the general population, coupled with the increased probability of older persons having a driver’s license.”

“The findings suggest that marketing efforts that focus on drivers 55 to 64 years old should have the highest probability of success per driver,” Sivak said. “The emphasis on this relatively older age group is further supported by the expected continuation of the graying of the population and the consequent continuation of the increase in the number of older licensed drivers.”