On Airbnb it pays to be a professional 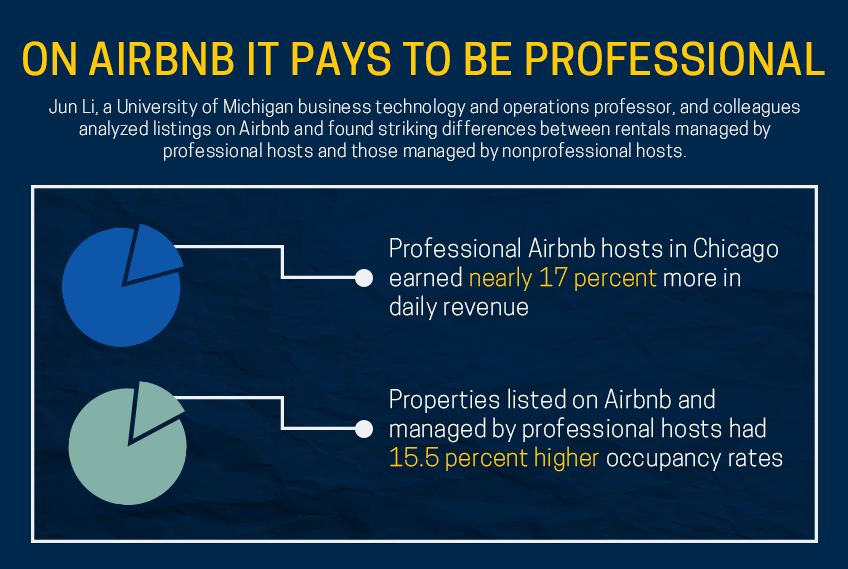 ANN ARBOR—In the sharing economy, it’s best not to do it yourself.

Li, along with Antonio Moreno and Dennis Zhang of Northwestern University, found after analyzing Airbnb listings in Chicago that the professional hosts earned nearly 17 percent more in daily revenue.

The researchers found that properties listed on Airbnb and managed by professional hosts had 15.5 percent higher occupancy rates, and were 13.6 percent less likely to exit the market compared with properties owned by nonprofessional hosts, even after controlling for property and market characteristics.

Hosts join with the expectation they will make good money by offering their properties through a platform. However, when they realize it doesn’t live up to their expectations, they will become inactive or leave the market completely. And that could have a crushing effect on sharing platforms.

“When hosts are not responsive to requests or when the supply of properties shrinks, customers are left with unhappy experiences or limited choices,” Li said. “Customers will opt for other options such as hotels, and this dampened demand will further decrease the hosts incentives to stay. It will create a spiral down effect.”

The widespread adoption of Internet infrastructure and smartphones has reduced the transaction costs associated with individuals sharing and trading their idle resources and capacity. The trend is often referred to as “the sharing economy,” which has revolutionized various industries in the past years.

One of the major differences in the sharing economy is that the supply side includes individual nonprofessional decision makers, in contrast to firms and professional agents.

“These performance discrepancies can be partly explained by pricing inefficiencies,” Li said. “The nonprofessional hosts are less likely to offer different rates across stay dates based on underlying demand, such as major holidays and conventions.”

Without the need to invest on physical assets or maintain a large internal workforce, many of the sharing-economy platforms such as Uber and Airbnb scale up quickly. Yet the platforms are limited in the tools they can use to manage their capacity.

“While Marriot can decide how many rooms are offered at which prices in each market, Airbnb cannot make those types of decisions,” Li said.

The researchers combined their empirical results with traditional two-sided market models to show that platforms like Airbnb should charge a lower price to nonprofessional hosts to compensate for their lower performance or, alternatively, could try to assist nonprofessionals with their pricing and capacity-management decisions.

An example of this is the pricing that Airbnb is currently providing to its hosts or the “heat maps” that Uber shows their drivers, to indicate areas where they are more likely to find a customer. Such actions help inexperienced hosts and drivers make more money, and are also likely to increase the profits of the platform.