Parasitic fungi and the battle against coffee rust disease 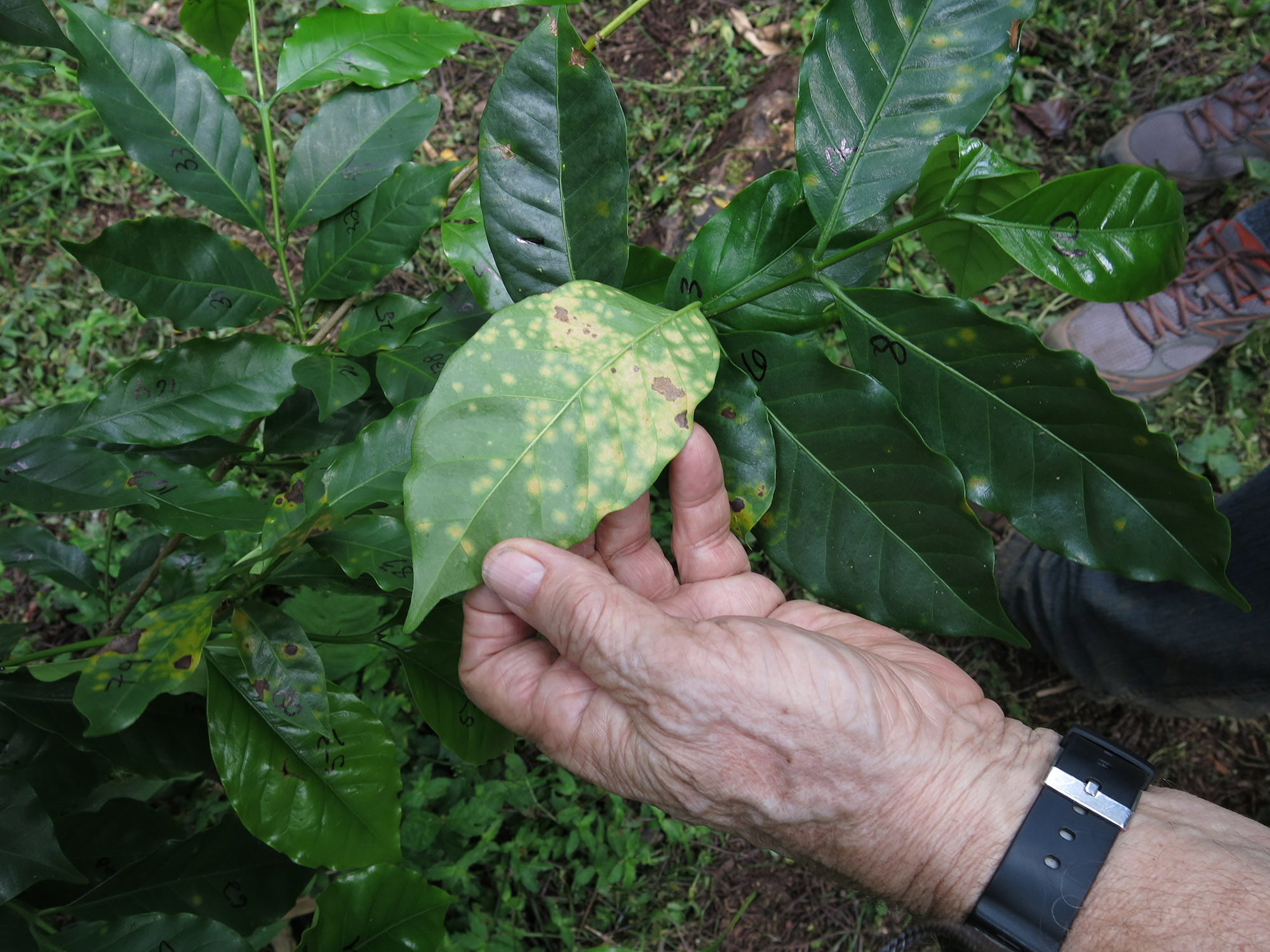 ANN ARBOR—Coffee rust has ravaged Latin American plantations for several years, leading to reductions in annual coffee production of up to 30 percent in some countries and threatening the livelihoods of hundreds of thousands of small-scale farmers in the region.

A new study by University of Michigan researchers suggests that the coffee plants themselves may hold biological weapons that could someday be harnessed in the fight against the coffee rust fungal pathogen.

Those potential weapons are themselves fungi, a surprisingly diverse community of more than 300 species of them—including 15 likely fungal parasites—living on coffee leaves, within or alongside the yellow blotches that mark coffee rust lesions.

They found up to 69 fungal species living on a single quarter-inch-diameter leaf disc from uninfected leaves and up to 62 species on rust-infected leaf discs, according to Timothy James, a U-M mycologist and lead author of a paper scheduled for online publication Nov. 13 in Applied and Environmental Microbiology, a journal of the American Society for Microbiology.

“Latin America is experiencing unprecedented epidemics of coffee rust, so identification of its natural enemies could aid in developing management strategies or in pinpointing species that could be used for biocontrol,” said James, an associate professor in the Department of Ecology and Evolutionary Biology.

“We recovered a surprisingly high fungal diversity in extraordinarily small samples of coffee leaf material—more than 300 species in a sampling area that, in total, was much smaller than the average size of a single coffee leaf. These hyper-diverse communities highlight the complexity of fungal diversity of unknown ecological function within these leaves.”

James’ co-authors on the paper include U-M faculty members Ivette Perfecto of the School of Natural Resources and Environment and John Vandermeer of EEB, who have operated research plots at an organic coffee farm in southern Chiapas, Mexico, for nearly 20 years.

The leaf-dwelling fungal species include 15 likely fungal parasites—organisms that grow on other fungi. The best-known of these so-called mycoparasites is white halo fungus, which is known to attack insects and help keep coffee rust fungus in check.

It’s possible that other fungal parasites on the leaves could be developed as biocontrol agents to combat coffee rust. But Vandermeer and Perfecto warn that tinkering with the complex ecological webs present on traditional shade-grown coffee farms could cause more harm than good.

“Our approach is mostly one of prevention, keeping the farm strong and healthy with a lot of natural enemies that can combat the pests, rather than trying to solve a problem after it has emerged, which has been the approach of agronomists and pest-control management people,” Perfecto said.

A total of 313 fungal species (or closely related groups of species) were found. The 15 likely fungal parasites were identified based on their association with coffee rust lesions or their genetic similarity to other suspected mycoparasite species.

Culturing and inoculation studies should now be used to test the candidate mycoparasitic fungi and verify that they are, in fact, parasites of coffee rust, the authors wrote.