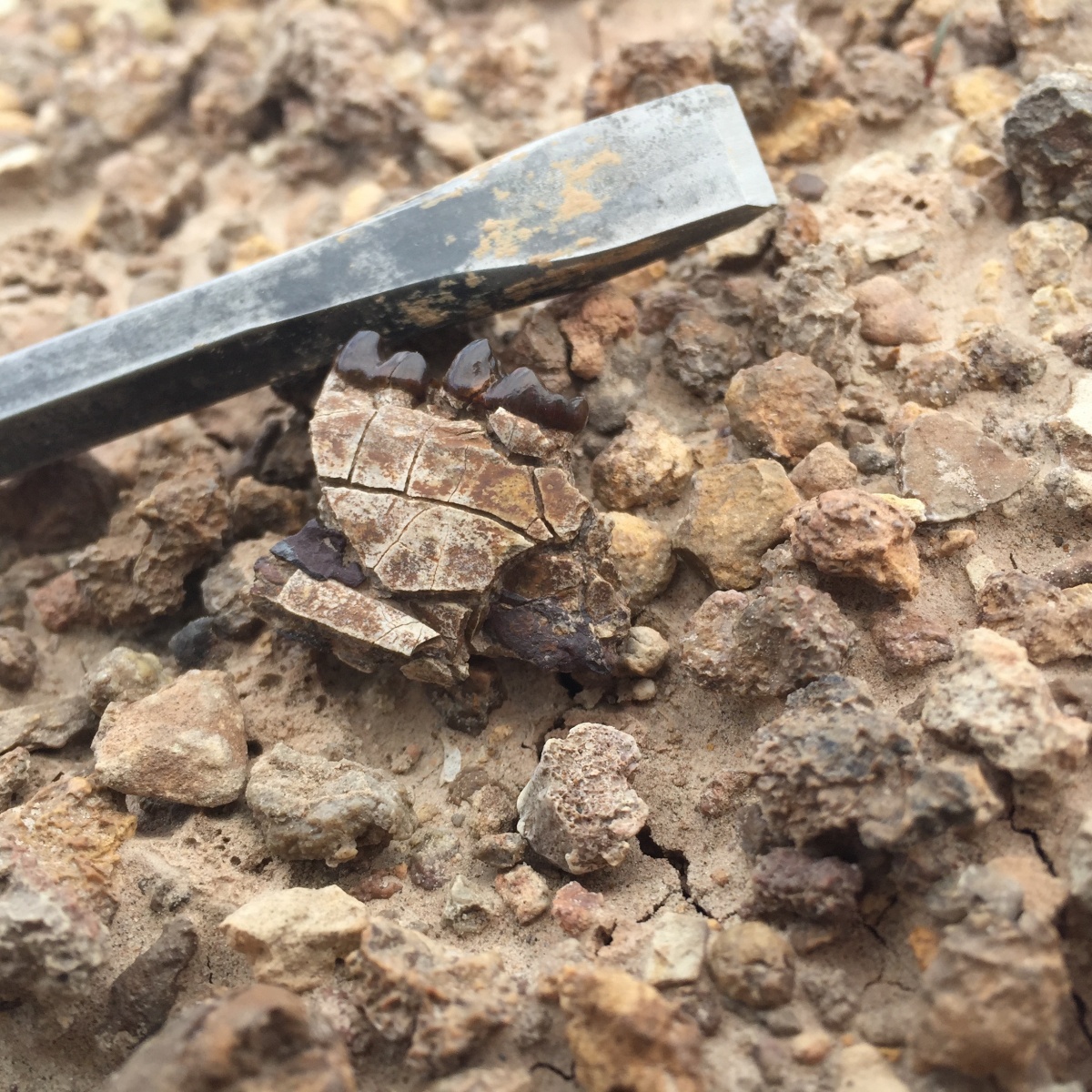 Arenahippus jaw fragment (with 2nd and 3rd molars), as discovered in field. For scale: Tip of chisel is ~1 cm wide. Image credit: University of New HampshireANN ARBOR—More than 50 million years ago, when Earth experienced a series of extreme global warming events, early mammals responded by shrinking in size.

While this mammalian dwarfism has previously been linked to the largest of these events, new research has found that this evolutionary process can happen in smaller events known as hyperthermals, indicating an important pattern that could help shape an understanding of underlying effects of current human-caused climate change.

The study was led by researchers at the University of New Hampshire. University of Michigan paleontologist Philip Gingerich is co-author of the study published March 15 in Science Advances.

“We know that during the largest of these hyperthermals, known as the Paleocene-Eocene Thermal Maximum, or PETM, temperatures rose an estimated 9 to 14 degrees Fahrenheit and some mammals shrank by 30 percent over time, so we wanted to see if this pattern repeated during other warming events,” said Abigail D’Ambrosia, a doctoral student at the University of New Hampshire and lead author of the study. “The hope is that it would help us learn more about the possible effects of today’s global warming.”

The researchers collected teeth and jaw fragments in the fossil-rich Bighorn Basin region of Wyoming. Their focus was on several early mammals including Arenahippus, an early horse the size of a small dog, and Diacodexis, a rabbit-sized predecessor to hoofed mammals.

Using the size of the molar teeth as a proxy for body size, the researchers found a statistically significant decrease in the body size of these mammals’ during a second, smaller hyperthermal, called the ETM2. Arenahippus decreased by about 14 percent in size, and the Diacodexis by about 15 percent.

“We found evidence of mammalian dwarfism during this second hyperthermal. However, it was less extreme than during the PETM,” said D’Ambrosia. “During ETM2, temperatures only rose an estimated 5 degrees Fahrenheit and it was shorter, only lasting 80,000 to 100,000 years, about half as long as the larger PETM.

“Since the temperature change was smaller, this suggests there may be a relationship between the magnitude of a global warming event and the degree of associated mammal dwarfism.”

U-M’s Gingerich and his students collected some of the fossils analyzed in the study. They worked with other team members to find fossils from the same stratigraphic sections that yielded isotopic evidence of climate change. 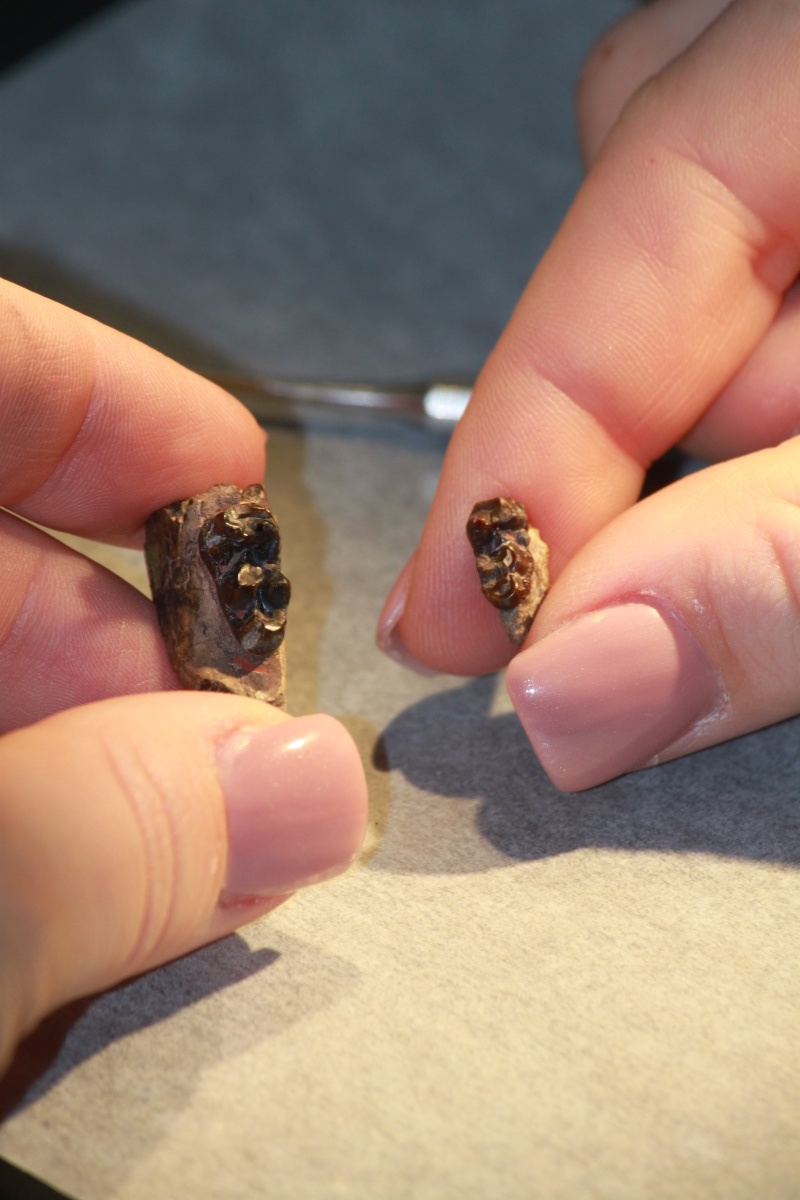 “What is important about these findings is that they replicate, extend and hence strengthen observations first made in connection with the slightly older and larger PETM event of global greenhouse warming, showing that many mammals respond to global warming by evolving to be smaller,” said Gingerich, professor emeritus of earth sciences, evolutionary biology and anthropology, and curator emeritus at the Museum of Paleontology.

Researchers propose that the observed change in animal body size could have been an evolutionary response to create a more efficient way to reduce body heat. A smaller body size would allow the animals to cool down faster. Nutrient availability and quality in plants may have also played a role.

Previous research shows that both the PETM and the ETM2 hyperthermals coincided with increased levels of carbon dioxide in the atmosphere. That could have limited nutrient quality in plants, which may have contributed to the smaller mammal body size.

Hydrological records during the PETM also suggest less precipitation and drought, which could have led to drier soils and even wildfires, which may have affected vegetation growth and, possibly, offspring size in mammals. After both hyperthermal events, body sizes of all mammals rebounded.

The carbon dioxide released during both hyperthermals has a similar footprint to today’s fossil fuels. Researchers hope that developing a better understanding of the relationship between the change in mammalian body size during those events and today’s greenhouse gas-induced global warming may help to better predict possible future ecological changes in response to today’s climate changes.

In addition to D’Ambrosia and Gingerich, authors of the Science Advances paper are William Clyde of the University of New Hampshire, Henry Fricke of Colorado College and Hemmo Abels of Delft University of Technology, Netherlands.

Preliminary findings of the study were presented at the Society of Vertebrate Paleontology’s 2013 annual meeting.