ANN ARBOR—Culminating in a modern debut at the University of Michigan this fall, faculty, staff and students at the School of Music, Theatre & Dance and U-M Library have spent the last several months rehearsing, creating and recording a performance edition of “Quando o bella Clori,” or “Clori e Fileno”—penned by Italian composer and keyboard virtuoso Domenico Scarlatti.

The performance edition is based on a manuscript from 1712 that has been part of the U-M Library’s music collection since the 1950s and was handwritten by a copyist who worked for Scarlatti. It was originally part of the private collection of Jean Auguste Stellfeld, a prominent Belgian jurist and musicologist.

According to music librarian Jason Imbesi, the acquisition of the Stellfeld Collection marked the Music Library’s shift from curricular support to a true research music library. This rare piece by Scarlatti is an example of the kinds of opportunities a research collection offers.

Louise Stein, professor of musicology, said that Scarlatti composed the piece while he was working in Rome for the widowed, exiled queen of Poland, Marie Casimire Louise de La Grange d’Arquien. As a serenata, the work is created for two solo singers, two violins and basso continuo.

The 1712 manuscript in the Music Library’s collection is the only known copy of the work. Stein said even this version is incomplete, given that the last pages have been ripped out. 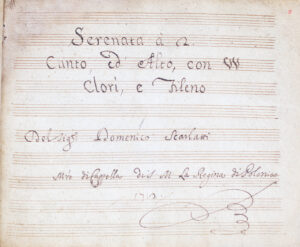 Domenico Scarlatti’s rare “Clori e Fileno” manuscript is part of the U-M Music Library’s collection. Students, staff and faculty at the University of Michigan worked to record a new version of the work this fall. Image credit: Alan Piñon

“It seems to be the only surviving serenata from Scarlatti’s time in Rome, so it is especially unfortunate that it is incomplete,” she said.

Stein said the piece was likely performed at the Palazzo Zuccari in Rome where the queen had established her lavish court and held musical evenings.

Adding to the mysterious history of the Scarlatti serenata is that faculty, staff and students believe that it is possible that the piece has not been performed for at least 200 years.

“It’s great to have something new that you didn’t know that this person wrote,” said Joseph Gascho, an assistant professor of music and keyboardist who has been advising student musicians as they prepare to perform the Scarlatti piece. “So we’ve learned a little bit more about him as a musician, composer and person. It’s just a little extra knowledge and insight into what he was like.”

To create a performance-ready edition of the manuscript, flute performance master’s student Ellen Sauer entered the notes into music-writing software and closely analyzed the work to try to understand the notation.

Sauer likened her efforts to that of an archaeologist, adding that since there are no recordings of the serenata, her team was forced to improvise due to the age of the piece—which was also essential in musical performance in the 18th century. And because the lyrics in the 1712 manuscript are written under the notes in Italian, Sauer said they workshopped the old Italian text underlay with Stein to determine how vocals would have been set with the notes.

“In that way, it feels really new because we’re recreating from scratch what we have,” she said. 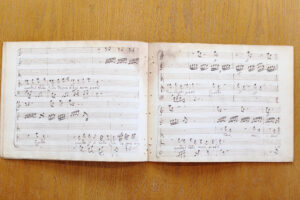 Domenico Scarlatti’s rare “Clori e Fileno” manuscript is part of the U-M Music Library’s collection. Students, staff and faculty at the University of Michigan worked to record a new version of the work this fall. Image credit: Alan Piñon.

As a musical artist, Sauer said the process of analyzing and following Scarlatti’s composition has made her feel more connected to this work than any others she’s encountered during her education.

“It’s like dealing with an old written manuscript and seeing somebody’s handwriting and feeling the old paper and being that much more connected to it,” she said.