Political pitfalls in handling Ebola may carry over to Zika 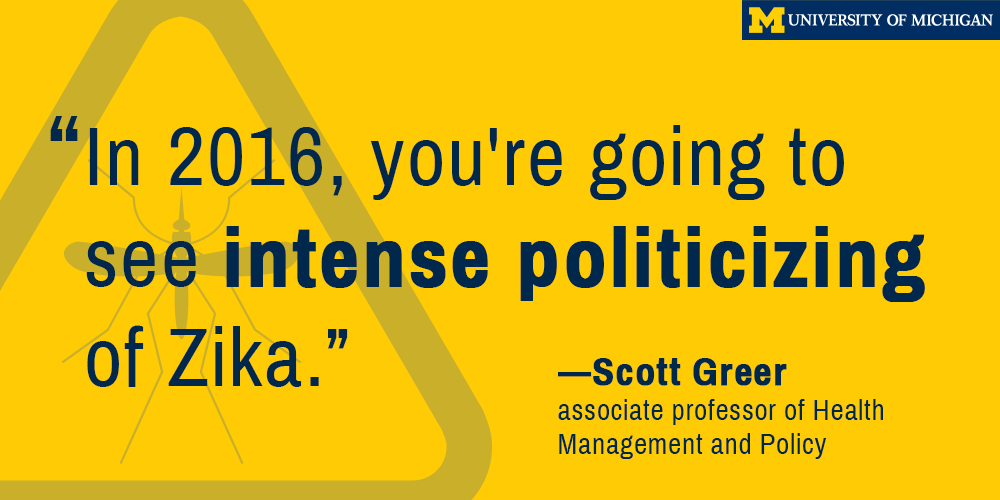 ANN ARBOR—If the United States responds to Zika the way it did to Ebola—and early indications are that in many ways it is—the country can expect missteps brought about by a lack of health care coordination and a lot of political finger pointing, according to an analysis by the University of Michigan.

Scott Greer of the U-M School of Public Health and colleagues studied the U.S. response to Ebola and found a fragmented system with no clear leadership, and considerable “strategic politicization” due to the outbreak’s arrival during a midterm election year.

Greer, associate professor of health management and policy, said the current administration’s difficulty getting funding for Zika in a presidential election year represents a bit of déjà vu, in terms of political posturing in the face of a major health threat.

“In 2016, you’re going to see intense politicizing of Zika. So don’t be surprised,” Greer said. “Republicans are going to continue not to give Obama the federal dollars he seeks to combat Zika. They don’t trust him. But when the virus starts to affect people anywhere south of Indianapolis there will be an elaborate game of blaming the administration for not doing it right.”

Similar criticism occurred during the Ebola outbreak, at which time the GOP—looking to gain a majority in the Senate—raised questions connecting Ebola to immigration and terrorism. Ebola became much more of an issue in the election for Republicans than for Democrats, and the Obama administration took it on the chin for the way it handled the situation, Greer and colleagues said.

This even translated into media coverage, they said, noting that the more conservative Fox News outpaced the more liberal MSNBC in coverage of Ebola leading up to the election (14 stories versus 11 per week), after which Fox stopped running news about it altogether, even while Americans were still being diagnosed.

MSNBC continued to give Ebola attention after the election. Further, Fox coverage included Republican commentators and politicians, and connections were made with immigration issues and foreign policy. The researchers said neither network covered Ebola prior to the U.S cases when it was only a problem in Africa.

Greer said politicizing some health issues is “not all bad,” pointing to what is occurring a bit closer to U-M’s home with the Flint water crisis. Michigan Democrats have been critical of the Republican administration and largely have driven the campaign to make political leaders accountable for decisions that resulted in lead contamination of the city’s drinking water, and to keep them moving forward to find solutions.

In an article in the current Health Economics, Policy and Law, the researchers lay out what they call a case study in the politics of public health in the U.S.

Public health leaders, including many experts at U-M, correctly predicted that the U.S. would be well equipped to handle Ebola if it reached the country, and could keep the disease from being the threat it was in Africa and other nations that have less sophisticated health care systems. There were 11 cases of Ebola in the U.S., four diagnosed here and seven transferred from African countries.

Two nurses were contaminated and required treatment because of the lack of coordination and clear protocol for handling the very first victim identified in the U.S., Thomas Duncan, the researchers said. Duncan arrived at the Texas Health Presbyterian Hospital in September 2014, was stabilized and sent home without an Ebola diagnosis, and returned in two days. He died less than two weeks later.

The authors said despite the success overall, their case study shows overconfidence in the health care system’s ability to handle Ebola.

“The way that the U.S. political and health systems are set up lends itself to mismanagement, confusion and uncoordinated responses,” said co-author Phillip Singer, doctoral student in the School of Public Health. “Management of public health crises within the U.S. political system is marked by fragmentation and overlapping responsibilities. There is very little formal or hierarchical governance within the U.S.”

In such a fragmented system, the authors said, the responses “tend to be driven by suasion—persuasive expertise—and executive action by presidents and governors, rather than a coherent bureaucratic response.”

Until an Ebola czar was appointed later in the outbreak, there was no effective central coordination.

“We need to create some permanent coordinator. We shouldn’t have a czar per disease,” Greer said, predicting that a Zika czar might be the next appointment.

Singer said that Ebola czar Ron Klain has the right idea for fixing the system by creating a public health emergency management agency, which “would have the funding and expertise to respond to the increasing number of infectious disease crises.”

“Not every hospital has the clinical expertise and the physical space to handle patients presenting with infectious disease symptoms for the long term,” he said. “What is needed is a system where individual hospitals are able to triage a patient with symptoms and then transfer patients to a more appropriate level of care.”

This ultimately is what happened with Ebola—a few health care systems capable of handling the disease were sent the later patients.

Singer also said the executive branch needs to streamline and coordinate among its agencies, and give the appropriate organization the larger leadership role.

“Homeland Security has very little practical public health experience, whereas the CDC has the expertise and very clearly delineated connections to similar state agencies across the country,” he said.

Greer offered what he calls a pie-in-the-sky remedy: “Can we please not make a political football out of this?”