Predators, parasites, pests and the paradox of biological control 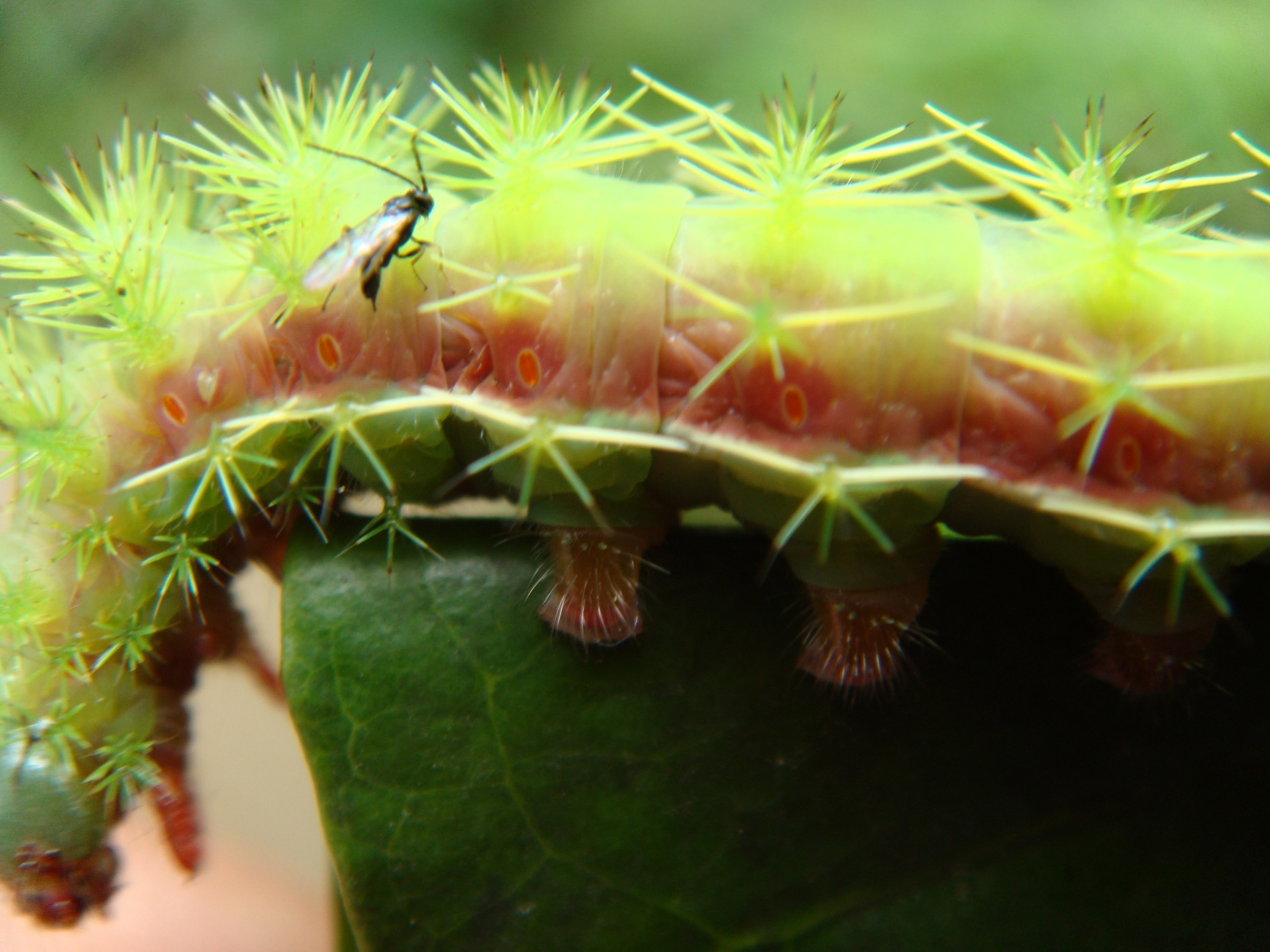 Parasitic wasp lays eggs inside a coffee-eating caterpillar in Chiapas, Mexico. Image credit: John VandermeerANN ARBOR—When a bird swoops down and grabs a caterpillar devouring your backyard garden, you might view it as a clear victory for natural pest control.

But what if that caterpillar is infected with larvae from a tiny parasitic wasp—another agent of biological pest control. Who should you root for now, the bird or the wasp?

A new study from University of Michigan researchers suggests that the gardener should cheer for both of them or, more precisely, for the struggle between the predator and the parasite. That kind of competition—even when it involves one creature killing and eating the other in what ecologists call intraguild predation—strengthens and stabilizes biological control systems, the U-M scientists found.

“Competition between control agents may actually help suppress pest problems by acting as a system of checks and balances, limiting overexploitation by any one of them,” said Theresa Ong, a U-M doctoral candidate and lead author of a paper scheduled for online publication Jan. 20 in the journal Nature Communications.

“Thus the coupling of two unstable systems has the counterintuitive result of creating a stable, more diverse system,” Ong said. The co-author of the paper is Ong’s faculty adviser, John Vandermeer, of the U-M Department of Ecology and Evolutionary Biology.

Ong and Vandermeer say the findings of their computer-modeling study have potential applications for the control of crop pests, especially in organic farming where synthetic pesticides are not allowed.

“Many traditional farmers and environmentalists subscribe to the popular idea that the natural world offers ecosystem services that contribute to the stability, productivity and sustainability of agriculture,” Vandermeer said. “That is in sharp contrast to the more industrial view of a farm as a battlefield on which the enemies of production must be vanquished.”

Ong and Vandermeer argue that in order to achieve effective, pesticide-free control in agriculture, “We must do away with reductionist analyses in favor of more holistic approaches that account for the complex nature of ecosystems.”

For decades, farmers have attempted to control crop pests by releasing natural enemies of those pests as biological control agents. In the United States, for example, small parasitic wasps, lady beetles, lacewings and damsel bugs have all been released into alfalfa fields to attack alfalfa weevil larvae.

But biological control systems have proven difficult to stabilize. Often, specialized control agents—which can include various predators, parasites and pathogens—are too good at their jobs. They eliminate the pests that feed them and eventually die out, leading to a resurgence of the pest.

Ecologists call it the paradox of biological control: The most efficient control agents sometimes cause the most extreme pest outbreaks. 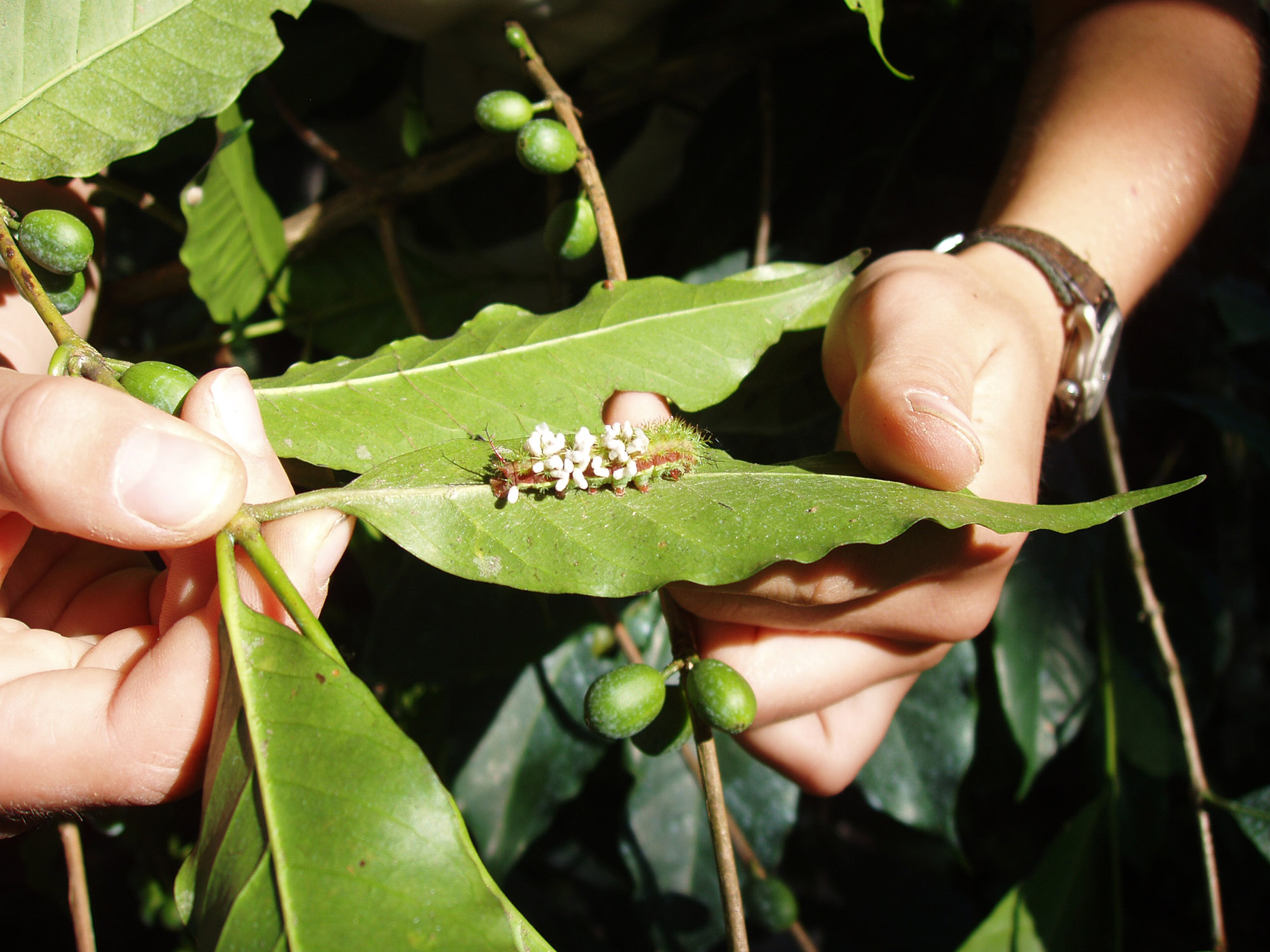 Cocoons spun by wasp larvae after emerging from the body of a caterpillar on coffee plants in Chiapas, Mexico. Image credit: John VandermeerThe situation grows more complex when multiple control agents compete for the pests. Many ecologists have assumed that competition between predators, parasites and pathogens weakens and destabilizes biological control systems.

But in their Nature Communications paper, Ong and Vandermeer show that separately unstable control agents can combine to create an effective pest management program with a stability that is reminiscent of natural systems.

“In Mexico, where our group has been working on biological control on coffee farms for the past 20 years, one of the major coffee insect pests is evidently controlled by a predator—the lady beetle—and a fungal pathogen, which corresponds to the basic framework we established in this theory,” Vandermeer said. “The variability we see in this system from year to year perhaps reflects the sort of simultaneous variability and stability this basic theory suggests.”

An example of a biological control system involving a predator, a parasite and a pest is a backyard vegetable garden where caterpillars feed on plants, tiny parasitic wasps lay eggs inside the caterpillars, and black-capped chickadees eat the caterpillars.

The birds and wasps compete for the available caterpillars. Sometimes, the chickadees inadvertently eat caterpillars containing wasp larvae, killing potential competitors in the process. That’s intraguild predation. Another example of intraguild predation can be found in Yellowstone National Park, where wolves sometimes kill coyotes that prey on the same resources the wolves do: elk calves and mule deer fawns.

Ecologists have assumed that intraguild predation and other forms of competition hinder biological control efforts. But the study by Ong and Vandermeer shows that’s not always the case.

“When the two control agents are combined in that backyard garden, the bird prevents the wasp from overexploiting the pest resource by eating wasps inside the caterpillars,” Ong said. “And the wasp helps lower the growth rates of the caterpillars to levels the birds can sufficiently cope with.”

Financial support for the study was provided by U-M’s Rackham Graduate School.