Public, including gun owners, oppose allowing guns in most venues 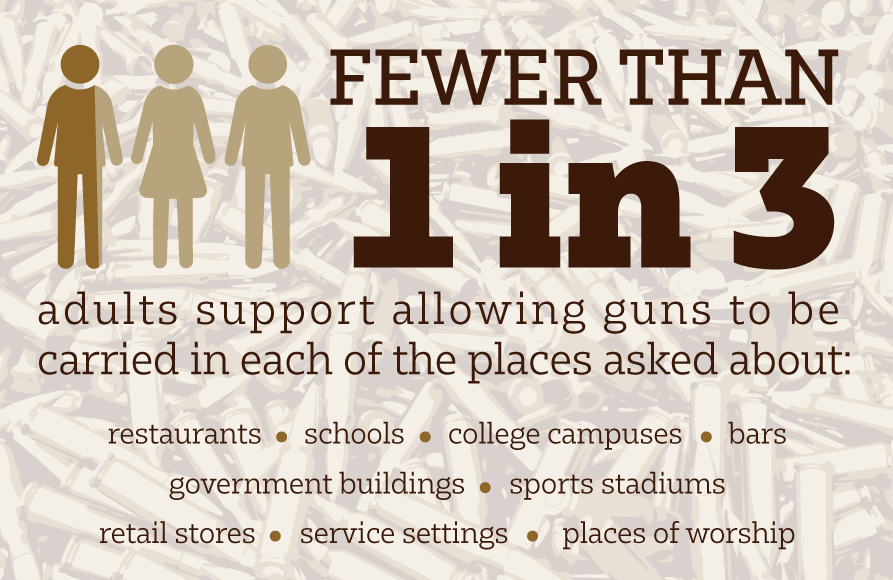 ANN ARBOR—As lawmakers across the country debate and enact legislation allowing people to carry guns in more public places, University of Michigan research shows that even those who own guns favor placing restrictions on the places firearms are allowed.

Julia Wolfson, assistant professor of health management and policy at the U-M School of Public Health, and colleagues, conducted a web survey of more than 3,900 people that included gun owners and veterans to determine public opinion about whether firearms should be allowed to be carried in nine public places.

They found that fewer than 1 in 3 adults support allowing guns to be carried in each of the places asked about.

“Gun violence is a serious public health problem that in 2015, the most recent year for which data is available, was responsible for more than 36,000 deaths,” Wolfson said. “High-profile shootings in public places such as schools, nightclubs and airports have focused national attention on the threat of gun violence in public places. As a result, many states recently have passed laws that expand the public places where people can legally carry guns, either openly or concealed on their person.”

Wolfson’s research shows that, overall, 45 percent of Americans, 25 percent of gun owners and 53 percent of non-gun owners, believe firearms should not be allowed to be carried in any of the locations, which include restaurants, schools, college campuses, bars, government buildings, sports stadiums, retail stores, service settings (hair salons, barber shops) and places of worship.

Support for carrying guns in public is lowest for schools, bars and sports stadiums, with less than 1 in 5 Americans agreeing that guns should be allowed in those locations.

Survey respondents were more supportive of laws allowing firearms in restaurants, service settings and retail stores but those percentages are 33, 31 and 31 percent, respectively. Twenty-three percent think guns should be allowed on college campuses.

Gun owners and political conservatives are more supportive of allowing guns to be carried in public. However, even among politically conservative gun owners, 78 percent support placing some restrictions on where guns should be carried.

“Our research shows that public opinion about the public places where guns should be allowed to be carried is at odds with the current trend in state legislatures and with proposed federal legislation that would require ‘reciprocity’ for gun carrying,” Wolfson said.

“This proposed legislation, if passed, would mean that a gun owner whose state allows him or her to carry a gun in most places may be able to legally carry the gun in such places while in a state with more restrictive laws. Given the low public support for allowing guns to be carried in public places, this would go against the will of the majority of Americans.”