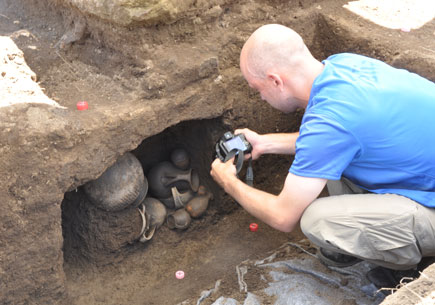 Matt Naglak, a student in the U-M Interdepartmental Program in Classical Art and Archeology, records an exceptionally well-preserved ceramic finds from the niche of an infant tomb dating to the period of city formation, about 7th century B.C.ANN ARBOR—A team of archeologists has published its first volume about the Gabii Project, a large-scale dig of an ancient city in Italy, in a first-of-its-kind online format.

Gabii was a settlement located just east of Rome that, like its more famous neighbor, emerged as a major city in the 8th century B.C. At its economic height, Gabii jockeyed for position with Rome, according to Marcello Mogetta, managing director of the Gabii Project, which is housed at the University of Michigan and sponsored by U-M’s Kelsey Museum of Archaeology. The city eventually receded as Rome rose, and waned almost entirely by the late 3rd century A.D.

“This was a time when Romans were discovering themselves,” said Nicola Terrenato, the Esther B. Van Deman Collegiate Professor of Roman Studies in the U-M Department of Classical Studies and leader of the Gabii Project. “This was before the Coliseum was built, a formative period when Roman people were figuring out what it’s like to be rich and powerful.”

In the new online publication by the University of Michigan Press, called “A Mid-Republic House from Gabii,” readers can wander through a 3-D rendering of the excavated layers as well as a reconstruction of an elite house within the city that the archeologists have been excavating since 2009. Readers can pause over a representation of an archaeological feature, click on the image and read about how the archeologists suspect it was used. 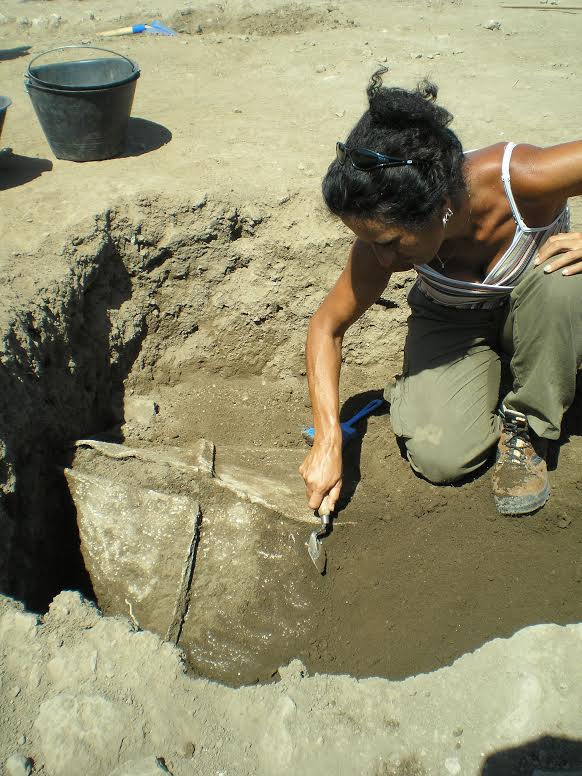 Gabii Project field director Anna Gallone and managing director Marcello Mogetta uncover the remains of a lead coffin.“We’re able to provide the reader with the experience of the actual excavation,” said Mogetta, who is also an assistant professor of Roman art and archeology at the University of Missouri. “You can kneel down just like the excavator…depending on the level of engagement, you could re-excavate what we excavate.”

In addition to the virtual walk-through, the researchers catalogued every artifact lifted from the dig and entered them into an online database. Casual readers and researchers alike can access the database from within the publication and use information from it for their own research.

“It’s not very common for archeological projects to publish the entire excavation archive. In a traditional print book, you’re talking about hundreds, if not thousands, of context sheets, forms and tables. Publishing all that would be absolutely daunting,” Mogetta said. “This would be a great tool for a doctoral student writing a dissertation, say, on coinage in central Italy.”

In that example, Mogetta says, the student could adjust his or her search within the archive to extract data in very specific ways. The doctoral student writing a dissertation on coinage is able to search the archive for information relevant only to his or her research needs. Photos, artifacts, samples, maps and descriptions are all tied to a unifying number, and those are linked to the place in the dig—the layer or wall—where an artifact was found.

“Typically, even in contemporary excavations, you might have to flip through a folder or a stack of 500 photographs to find the one you need,” Terrenato said. “We’ve structured this archive so that you can search by keywords, and if a photograph shows two layers—a wall and the ground—the photo will appear in both records so that you always retrieve all the relevant images.” 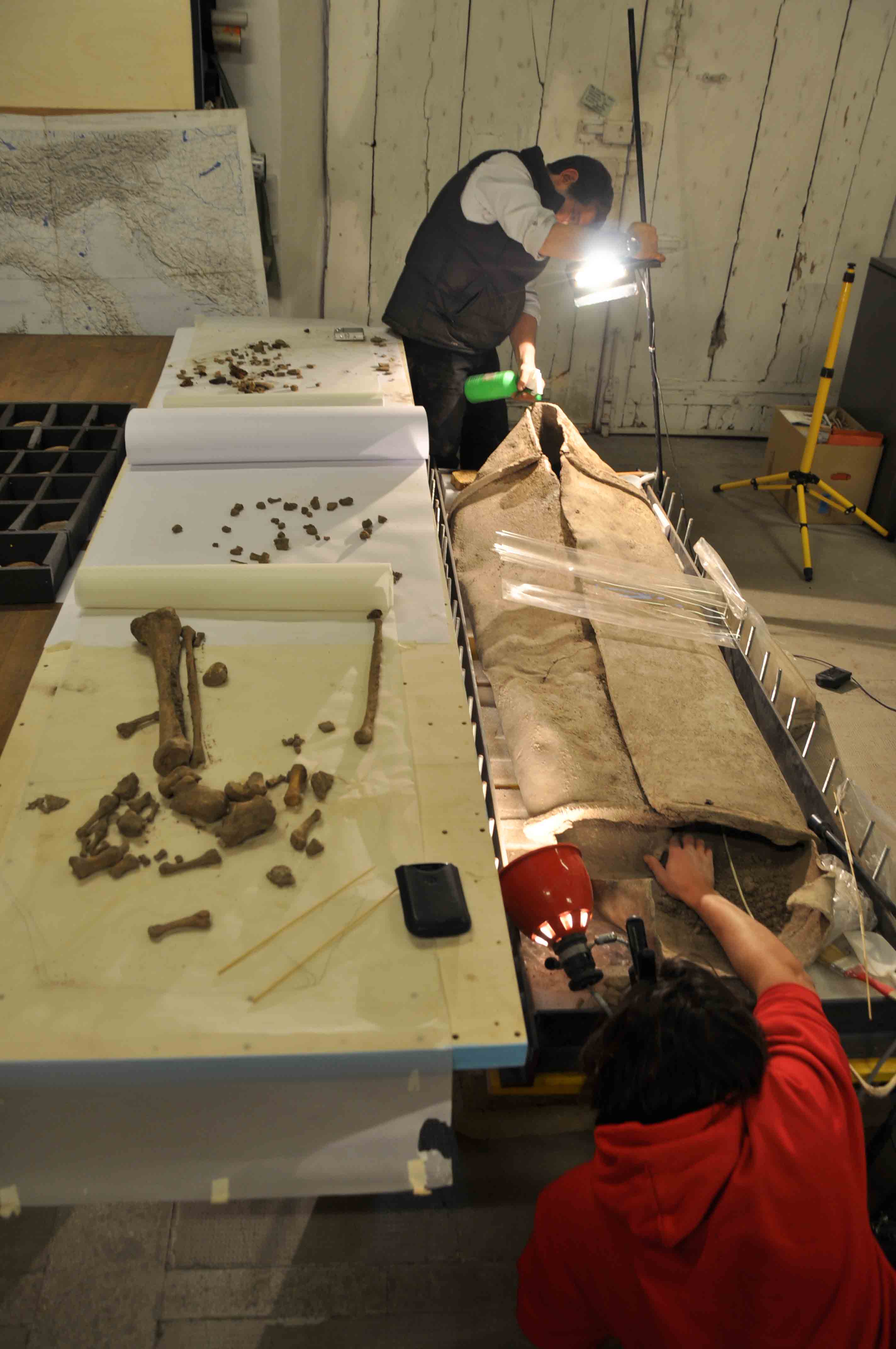 The content of the lead coffin was excavated in the lab at the American Academy in Rome. The lead sheets wrapped the body of an adult male individual who died around the age of Nero, whose skeletal remains are visible on the left. No grave goods were found, but the disposal of 500 pounds of metal is in itself a sign of the high status of the deceased.Going forward, Mogetta and Terrenato’s team has three main research questions: to explore how Gabii became urbanized; to study when architecture started to become large scale; and to study how such an early city began to decay. Gabii provides a prime opportunity to study early urbanization because the city began dying as it became urbanized. Rome kept growing—and its growth literally covered the roots of its urbanization.

“In Rome, it’s very difficult to reach the early levels of the city,” Mogetta said. “You have to get through modern buildings, medieval cellars and Roman imperial architecture. What you get is thumbnails of early city.”

“Gabii was so close to Rome that eventually most of the well-off aristocrats moved to the capital—that’s where big politics was happening,” Mogetta said. “It was much better to build your home next to the Roman forum where all the political bickering was happening than stay at Gabii, but the end result was that progressively, what was once a sizeable town shrunk to the level of a village.”

City dwellers started repurposing parts of the city, Mogetta says. Aristocratic houses became “shady, stinky, smelly” industrial buildings like laundry shops. Other parts of the site were completely razed in order to quarry volcanic stone from the city’s bedrock to be used in Roman imperial architecture.

“Everybody left, but whoever stayed recycled themselves in a way that they could thrive in the new condition of the city,” Mogetta said. “It’s easy to reference the case of Detroit, in which you saw this inevitable collapse and crisis, which was brought about by external factors—but local communities found their way to live through a new situation.”

The researchers’ next volume in the Gabii publication will examine, among other finds, the elaborate burial of an apparently wealthy man. The man had been buried in a 700-pound sleeve of lead wrapped around his body, leading the archeologists to dub the sarcophagus “the lead burrito.”

Charles Watkinson, associate university librarian for publishing and director of the U-M Press, says the online publishing platform allows not only an immersive experience for the reader, but a faster way to publish research from archeological digs. 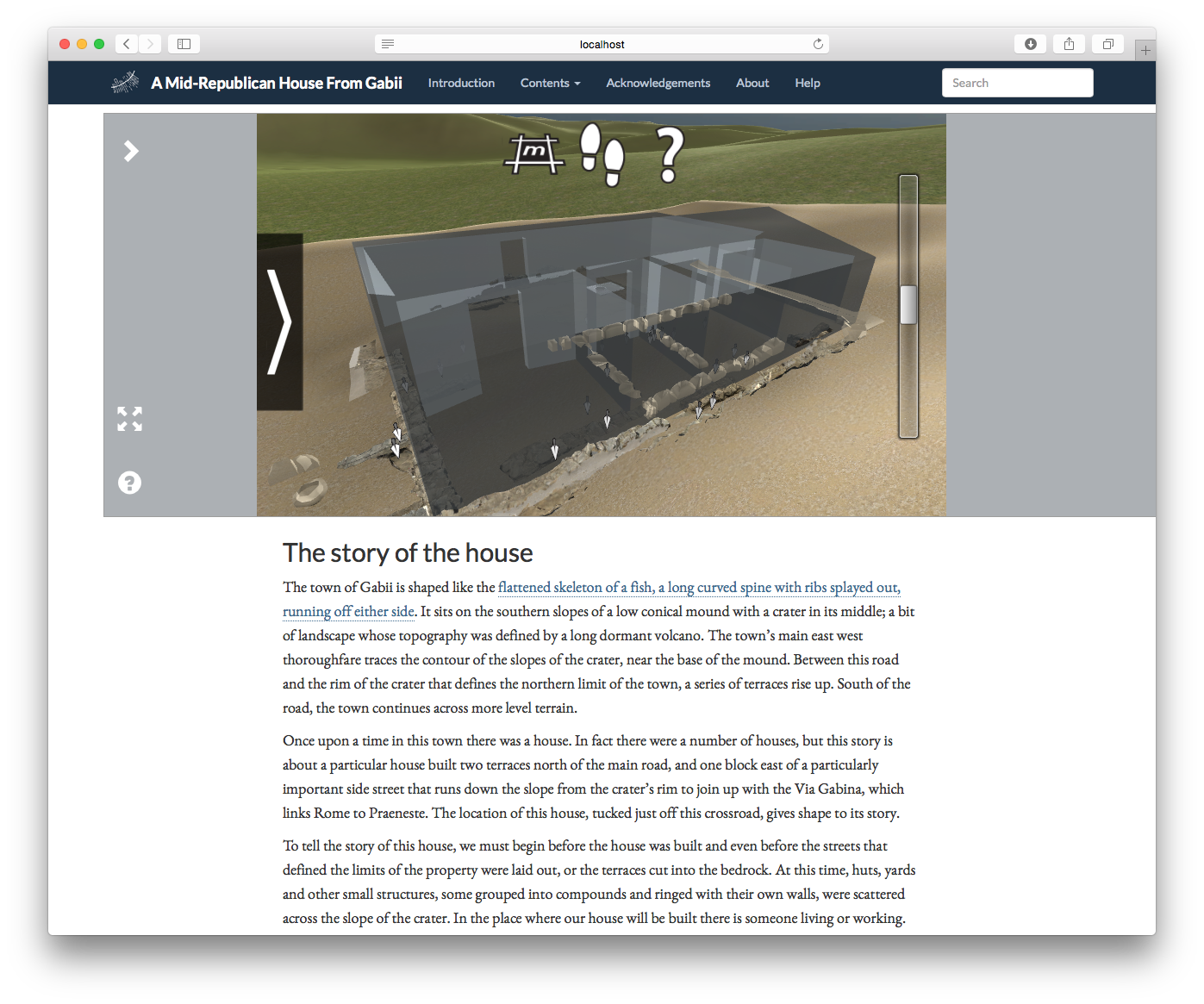 A new online publication called “A Mid-Republic House from Gabii” allows readers to wander through the dig.“Digital technologies are being used by the University of Michigan to transform the way research in archeology is done, and that includes how the work is published,” Watkinson said.

“There have been concerns in the archeological community that delays in publishing the final results of big digs are too much of a negative factor in starting large excavations like ours,” Mogetta said. “We’re hoping this kind of publication will make the pipeline from excavation to final publication as streamlined as possible.”

U-M will also maintain digital access to the book through the its library system, where researchers can access any piece of information associated with the dig through the publication’s database—even handwritten notes. Terrenato said the online publication will also be safeguarded by the U-M libraries system which provides long-term preservation as well as access.

“This is about creating and distributing knowledge and being in the business of keeping it available, which is what libraries have been doing for the last three thousand years,” Terrenato said.

A U-M Humanities Collaboratory grant beginning in May will focus on understanding how the digital publication is used by and improving the next installment in a newly established series, titled the “Gabii Project Reports.” This leverages a broader effort to create Fulcrum, a platform for new formats of digital publication led by U-M Press, which is being supported by a three-year, $900,000 grant from the Andrew W. Mellon Foundation. Meanwhile, the U-M excavations at Gabii will continue to gather new data thanks to a three-year, $250,000 grant from the National Endowment for the Humanities.