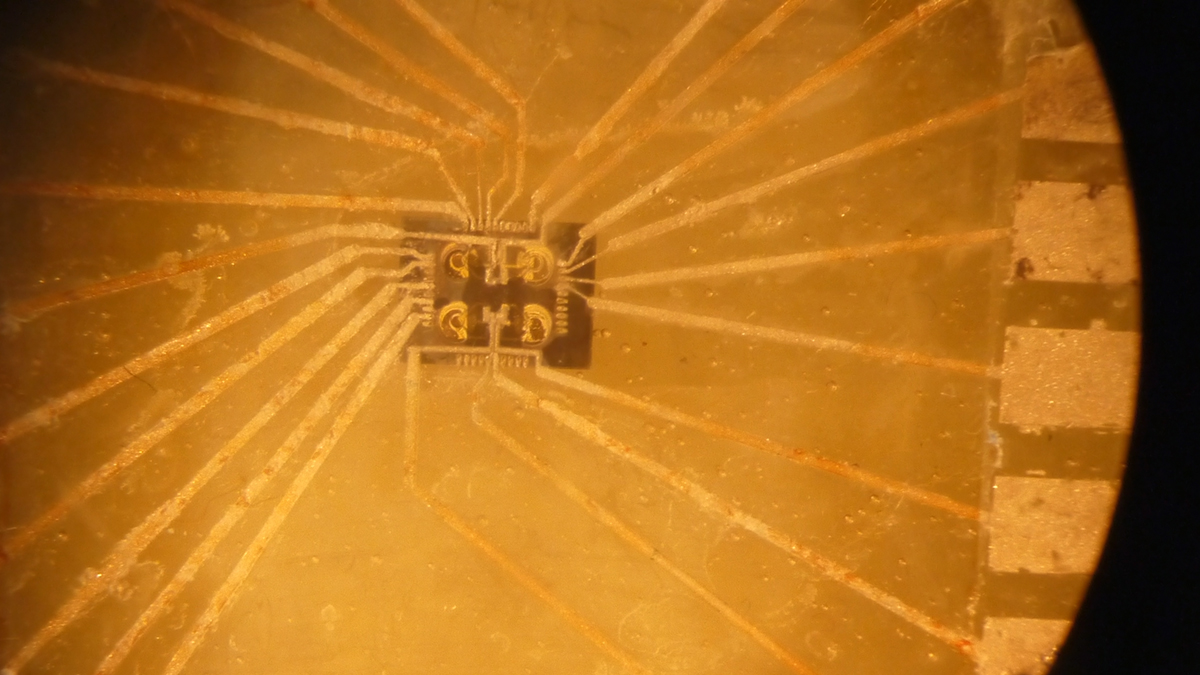 Researchers at the University of Michigan, Michigan State University and Oakland University are teaming up to develop wearable technology able to identify particulate matter pollution such as soot and toxic metals generated by cars, trucks and industrial sources with a $2.78 million grant from the National Institutes of Health. The new grant work will build on the team’s previous work, including that of Andrew Mason, a professor at MSU’s College of Engineering, who will focus on developing the microscale sampling device. Shown here under the microscope is some of Mason’s past work, tiny electronics and channels for fluids will be at the heart of the team’s sensing devices. Image credit: Matt Davenport

A walk in the park could soon include getting real-time measurements of pollutants in the air and updated walking routes to avoid the most toxic ones, all while wearing a gadget the size of a smart watch.

With the support of a $2.78 million grant from the National Institutes of Health, researchers at the University of Michigan, Michigan State University and Oakland University are teaming up to develop wearable technology able to identify particulate matter pollution such as soot and toxic metals generated by cars, trucks and industrial sources.

“When we look at the global burden of disease, particular matter is by far the biggest driver of premature deaths from exposure to air pollution,” said Tim Dvonch, associate professor of environmental health sciences at U-M’s School of Public Health.

Until now, most research required big and expensive outdoor monitors or several-pound devices workers use in occupational settings, he said.

“Some of the most vulnerable people to adverse effects from air pollution exposure happen to be children, pregnant women and women of childbearing age,” he said. “Having an easily wearable device would help monitor the air they’re exposed to, and hopefully provide healthier alternatives in near real time.”

Dvonch said the team first started working in wearable technology in 2013 to detect pollutant gases but are now focusing on particulate matter, given that it’s responsible for an estimated 7 million premature deaths every year, according to new air quality guidelines published in September by the World Health Organization. That’s roughly 1 in 9 deaths globally.

“Air pollution and, specifically, airborne particulate matter has a huge impact on health, on respiratory and cardiovascular illnesses, and it’s also associated with a number of other adverse health outcomes,” Dvonch said. “Vulnerable populations include prenatal exposures, young children and the elderly, and we know it also disproportionately affects communities of lower socioeconomic status and communities of color who may live near air pollution sources like motor vehicle traffic, incinerators, refineries or power plants.”

Within the team, Andrew Mason, a professor at MSU’s College of Engineering, focuses on developing the microscale sampling device, while Xiangqun Zeng, professor of chemistry at Oakland University, is developing the chemical sensor technology.

Once the device is developed, Dvonch and the U-M team will be in charge of field-testing it in communities in metro Detroit, measuring it against existing monitors for accuracy and designing walking maps throughout neighborhoods that are known to have variable levels of air quality, to further evaluate the device.

Many of the pollutants that affect hearts, lungs and brains are invisible to human eyes. And many of the current technologies used to monitor air pollution take days or weeks to collect and process data.

“That’s helpful for epidemiological studies, but it doesn’t tell you what’s going on today,” Mason said.

Adding a network of wearable devices would provide unprecedented data about air quality over space and time, helping inform policies and interventions to help protect the most vulnerable, the researchers said.

But developing those devices is no small feat. The research team will need to build technology that can count particles, characterize what each particle is made of and also determine particle size down to nanometer scale.

On top of all that, the team has challenged itself to become the first to fit such technology into something the size of a wristwatch.

“Currently, there is no personal monitoring device available because of the complexity,” Zeng said. “The most exciting aspect of this project is its significance and innovation.”

Dvonch said it will be a challenge to accomplish all of the project goals, but “the project team is very organized and efficient and I expect this will allow us to overcome the challenges we may face.”

“Not only will the developed monitoring devices from our project be applicable to assessing air pollution exposures across many parts of the globe, importantly, our project will be able to test, evaluate and begin to address these particulate matter exposure issues right here in Michigan communities,” he said.