Researchers study how cooperation can trump competition in monkeys 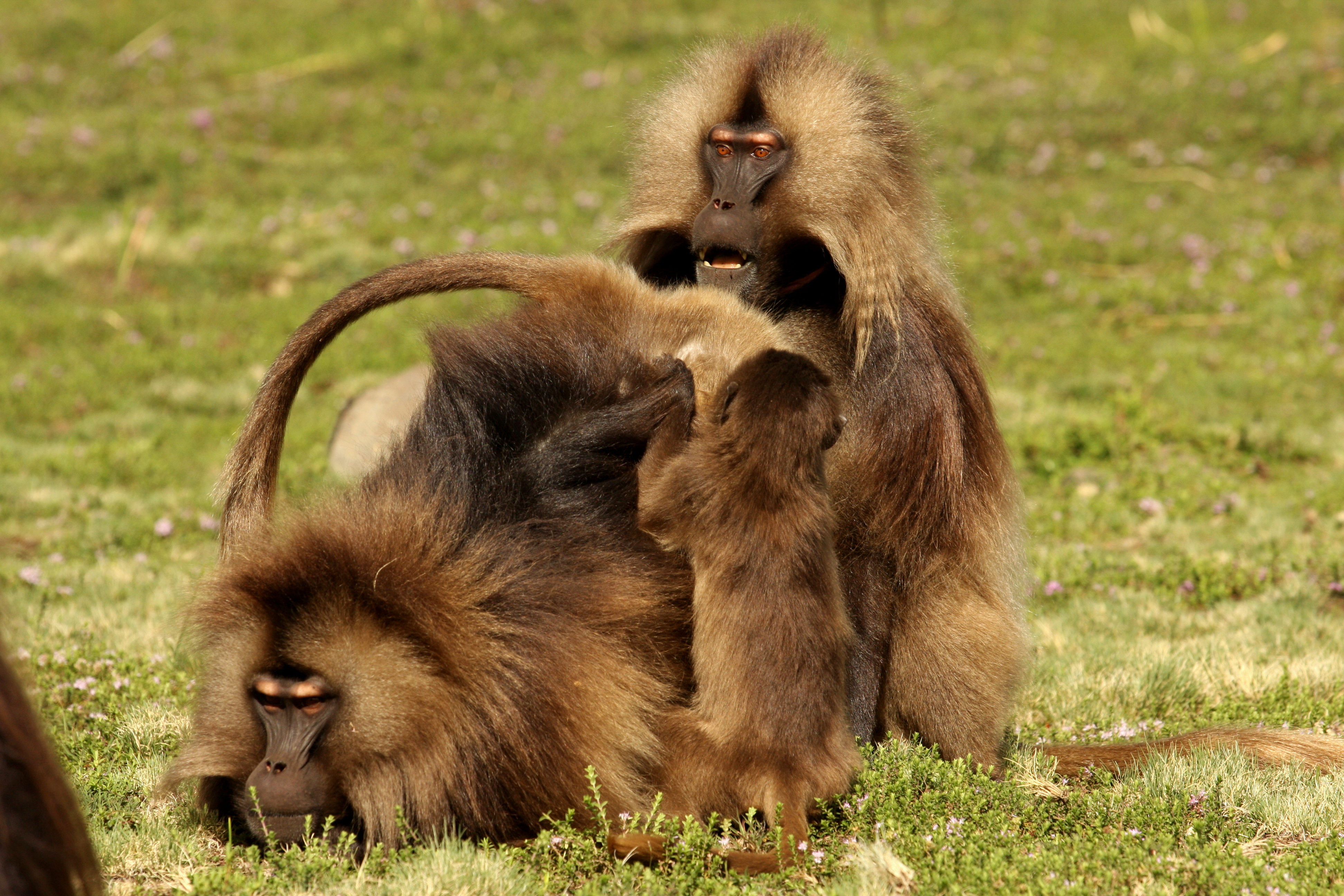 Two males threaten an intruder while grooming with an infant. Image credit: Clay WiltonANN ARBOR—Being the top dog—or in this case, the top gelada monkey—is even better if the alpha male is willing to concede at times to subordinates, a new study indicated.

Alpha male geladas who allowed subordinate competitors into their group had a longer tenure as leader, resulting in an average of three more offspring over his lifetime.

The findings, collected from data during a five-year period ending January 2011 through the University of Michigan Gelada Research Project, appear in the current issue of the Proceedings of The Royal Society.

Cooperation is surprisingly common among wild animals, the researchers said. While it makes evolutionary sense for animals to help their kin, it is harder to explain cases where competitors—especially unrelated adult males—join forces. This conundrum is particularly hard to explain because mating is generally a zero-sum game in which males can only reproduce by stealing mating opportunities from each other. 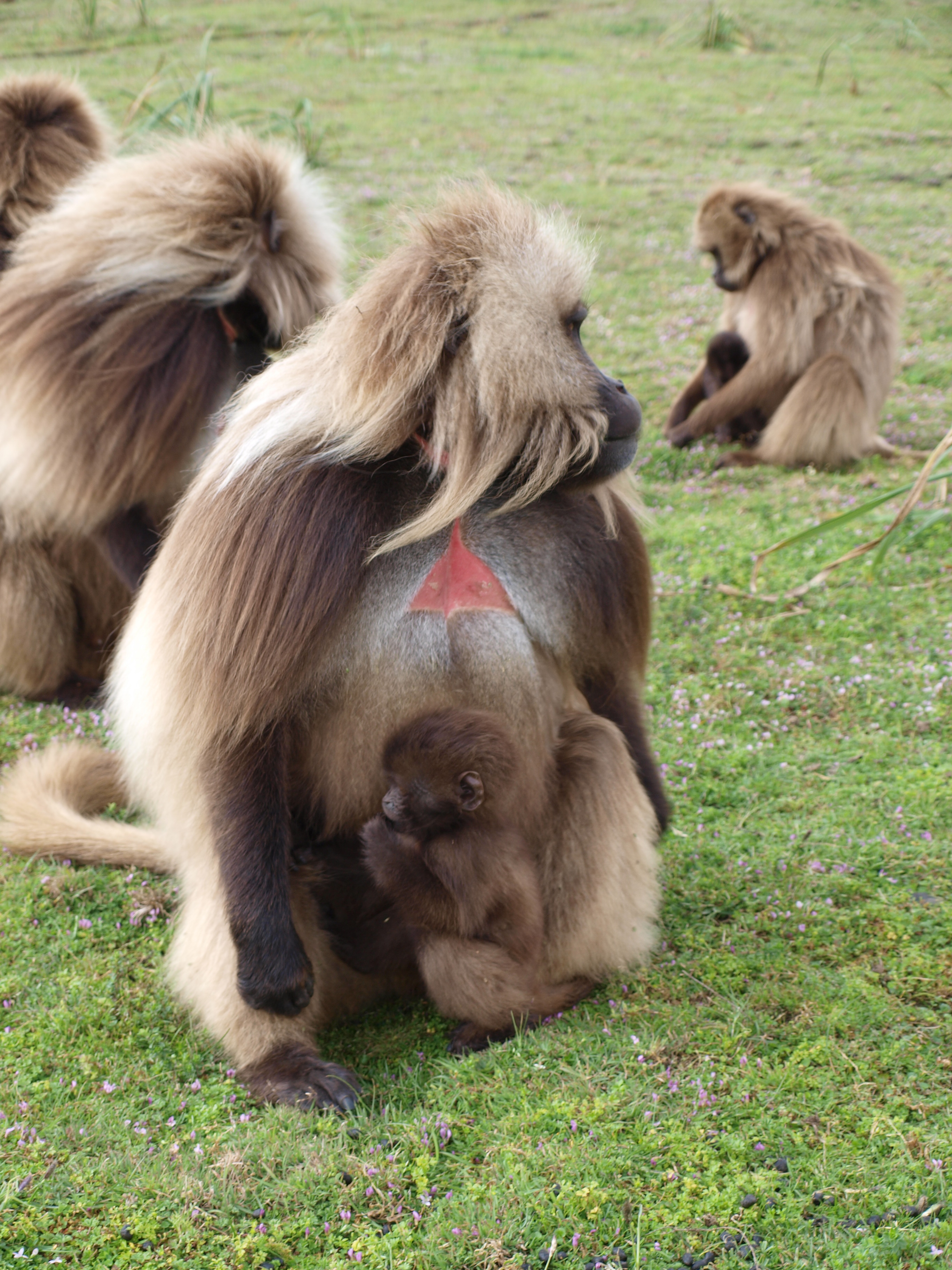 A follower male sits with an offspring that he may have sired. Image credit: Noah Snyder-MacklerThus, as a male, why would you want to hang out with other males who inevitably decrease the probability that you will pass on your own genes? Yet in many species, males do.

“For example, in some species unrelated males will sometimes tolerate the presence of one another and in rare cases, form bonds and even appear to cooperate,” said Noah Snyder-Mackler, a doctoral graduate of psychology at the University of Pennsylvania and the study’s lead author.

Even more tantalizing is evidence that the subordinate males that are allowed to mate stay around in the group for much longer. This suggests that the alpha males may allow the subordinate to reproduce as a “staying incentive” for defending the group—a payment for their services, said Thore Bergman, U-M assistant professor of psychology.

While it is not yet clear that such an exchange is occurring (subordinate males may simply steal some reproduction), the evidence that subordinates benefit the leader is strong.

“These findings demonstrate a benefit of forming multi-male groups in a predominantly single-male system—an important step in the evolution of sociality among unrelated competitors,” Bergman said. 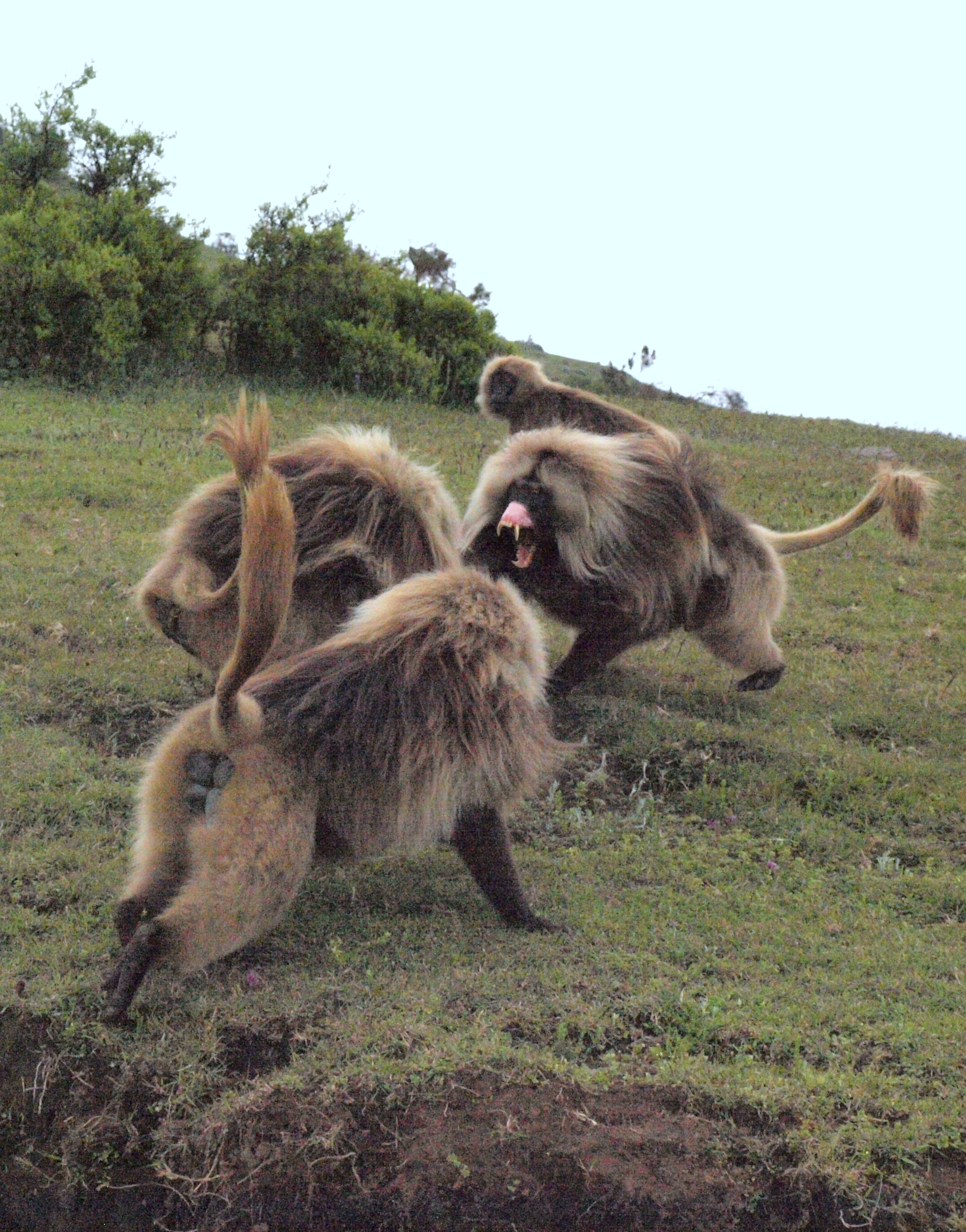 A leader and follower fend off a bachelor. Image credit: Noah Snyder-MacklerIn studying wild geladas in the Simien Mountains National Park in Ethiopia, researchers identified the leader and follower males, noted the numbers of females in all units, tracked individuals involved in unit takeovers, and noted all new infant births. They used non-invasively collected genetic samples to conduct paternity analysis to determine the identity of the father.

Researchers saw that the dominant and subordinate males cooperatively defended their females by fending off unattached bachelor males intent on taking their females—the likely mechanism leading to the increased tenure of the dominants.

“Overall, this means that just because animals appear to be in direct competition for a limited resource, they may still benefit from the relationship overall,” Snyder-Mackler said.

Thus, cooperation can evolve among competitors through a variety of mechanisms. In the study, researchers chronicled how it can evolve in the context of reproductive sharing.

“More comparative research on other species will give us a better understanding of how and under what circumstances cooperation among unrelated individuals may have evolved,” Snyder-Mackler said.