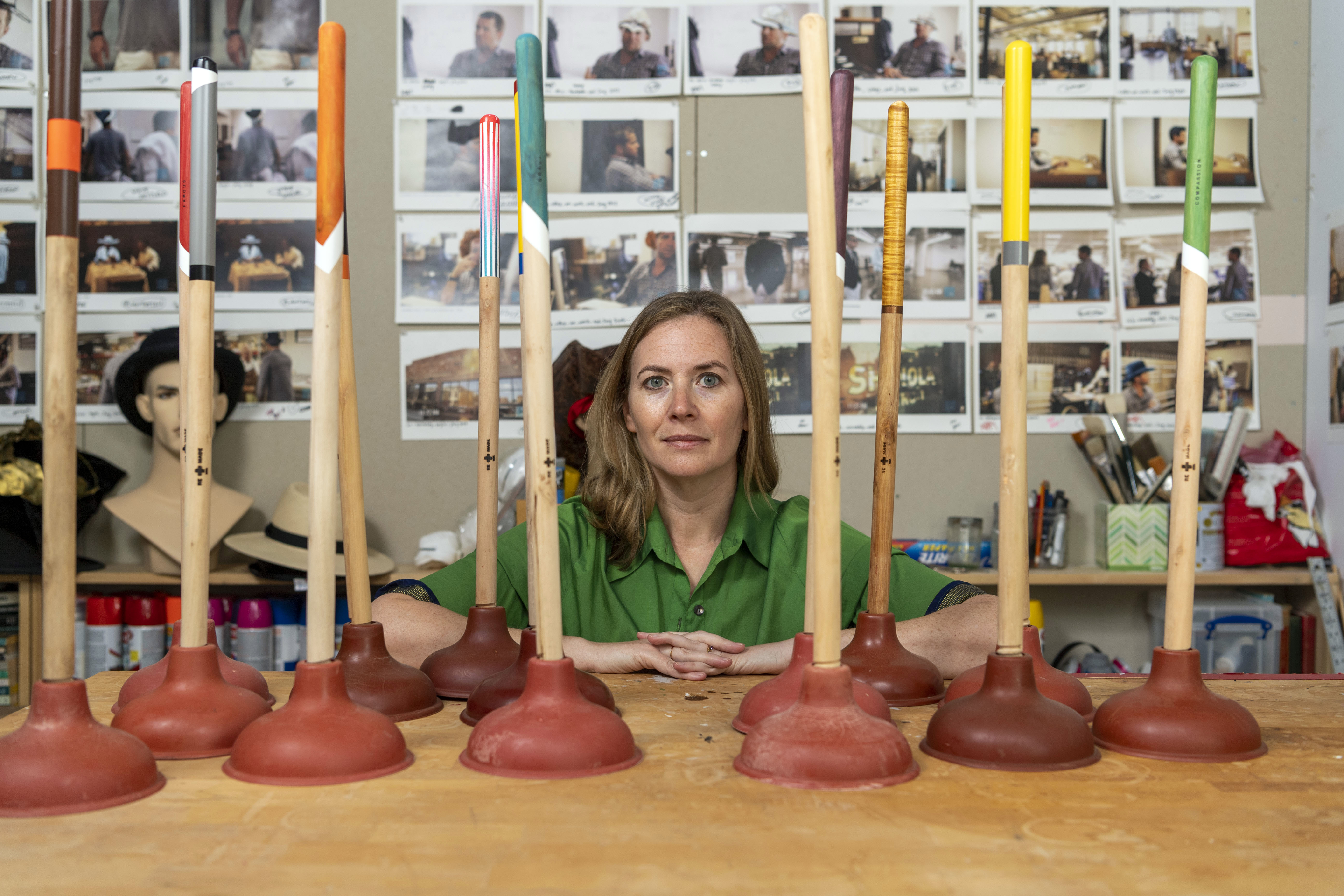 ANN ARBOR—Growing up, Rebekah Modrak’s family dinners were set against the soundtrack of her firefighter father’s radio, the cries of emergencies interwoven with the sounds of clanging forks and hungry bites.

Her father had been active in pro-union work throughout his life. He was forced to leave graduate school because of his involvement with a Students for a Democratic Society chapter, and was even fired from a job as a carpenter’s apprentice after he tried to start a union.

“I grew up hearing these stories and understanding that this was what you did: you spoke up when you saw exploitation of power, whether or not there was personal consequence,” Modrak said.

Years later, Modrak is still exploring the intersections between power, labor and consumerism to examine the rights of communities and workers in society.

Modrak, a professor of art and design at the Penny W. Stamps School of Art & Design, creates artistic work “around how representation evokes power.” Oftentimes, Modrak says she plays in “the terrain of commerce in order to expose messages or open up counter-narratives.”

For one of her projects, Modrak drew inspiration from a news article about Best Made Co., a New York-based business that sells $368 axes and claims they’re a “company that finds meaning through making the best things (they) possibly can.”

“I thought of the bodily risks my father took at work and tried to imagine a company painting stripes on his fire coat or his axe or hose and selling it to a wealthy white-collar guy so he could feel connected to physical labor,” Modrak said. “I watched Best Made’s brand video, with the American flags and the reference to the pioneer, the aggressive manliness and the pretension of this being about ‘labor.’ And these things just sat there in the back of my mind.” 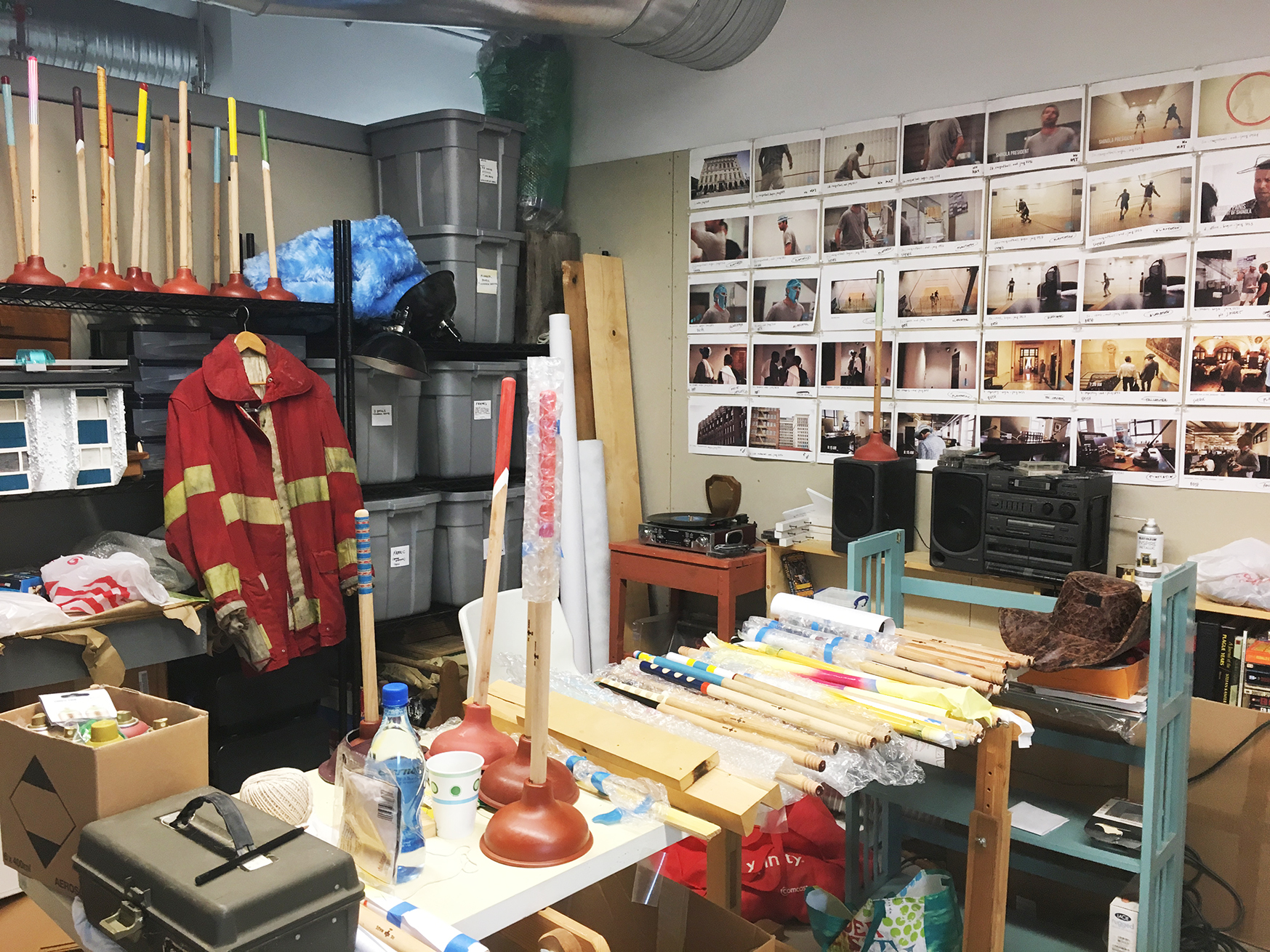 Rebekah Modrak’s father, Robert, was a firefighter in the Homewood neighborhood of Pittsburgh. His coat hangs in her studio. Image credit: Rebekah Modrak

Modrak eventually created “Re Made Co”—a satirical version of the company’s brand video, website and social media accounts that featured toilet plungers instead of axes.

“Brand merchandising is empty rhetoric,” Modrak said. “It’s there to persuade people to purchase something. It’s a con. When you’re distracted by this, you miss out on any real connection that might be possible.

“It also falsely suggests that identity construction is as easy as simply pulling out your credit card and making a purchase—as opposed to confronting how difficult it is to swing a heavy axe for eight hours a day, five days a week, 52 weeks a year. That’s when you learn about labor and develop compassion for people who work, and want to advocate for better working conditions.”

In another, more recent, net-based project titled “Rethink Shinola,” Modrak draws on witnessing the influx of press when white-owned businesses opened in Detroit in the late 2000s. The public narrative centered on how white people were supposedly saving Detroit.

She observed that Shinola—a Detroit-based company that produces luxury products like watches, bicycles, leather goods and other objects—used images of black assembly line workers in their marketing. These shots were juxtaposed against photos of the company’s white leadership without work smocks.

“I wrote a book about photo history, theory and practice, and a lot of this is focused on the power dynamics of images—how photography has, since its inception, been a tool used by those in power to control the representations, and therefore the mobility and agency, of those who are not in power,” Modrak said. “This Texas-based company waltzed into Detroit with all their venture capital money and assumed the name Detroit and 50 years of resilience that comes with living with few services or infrastructure for their branding. The black people imaged in their ads were not the owners of the company. They did not control these images.”

Shining a light on how economic development can lead to exploitation, Modrak created “Rethink Shinola,” an online artwork that comprises multiple elements, including a reenactment of presentation that former company president Jacques Panis gave at U-M and a video where her team of animators drew colonial hats onto Panis and other company executives.

Although brand messaging can impact people’s lives and perceptions of identity in major ways, a lack of financial resources and her parents’ beliefs gave Modrak a different lens with which to view life.

“My parents saw brand consciousness and coveting brands as snobbishness,” Modrak said, adding that her upbringing did not encourage her to aspire to own things.

“I see brands like Best Made Co.—who try to create a ‘community’ or a following by selling a brand identity—as cultish behavior, both in imposing this control and in the emptiness of filling one’s self with brand projections.”

Modrak’s work “Rethink Shinola” is part of “Border Control: Traversing Horizons in Media Practice,” an exhibition on view at the U-M Stamps Gallery (201 Division St., Ann Arbor) until Nov. 10. The Stamps Gallery is free and open to the public Tuesday-Sunday.