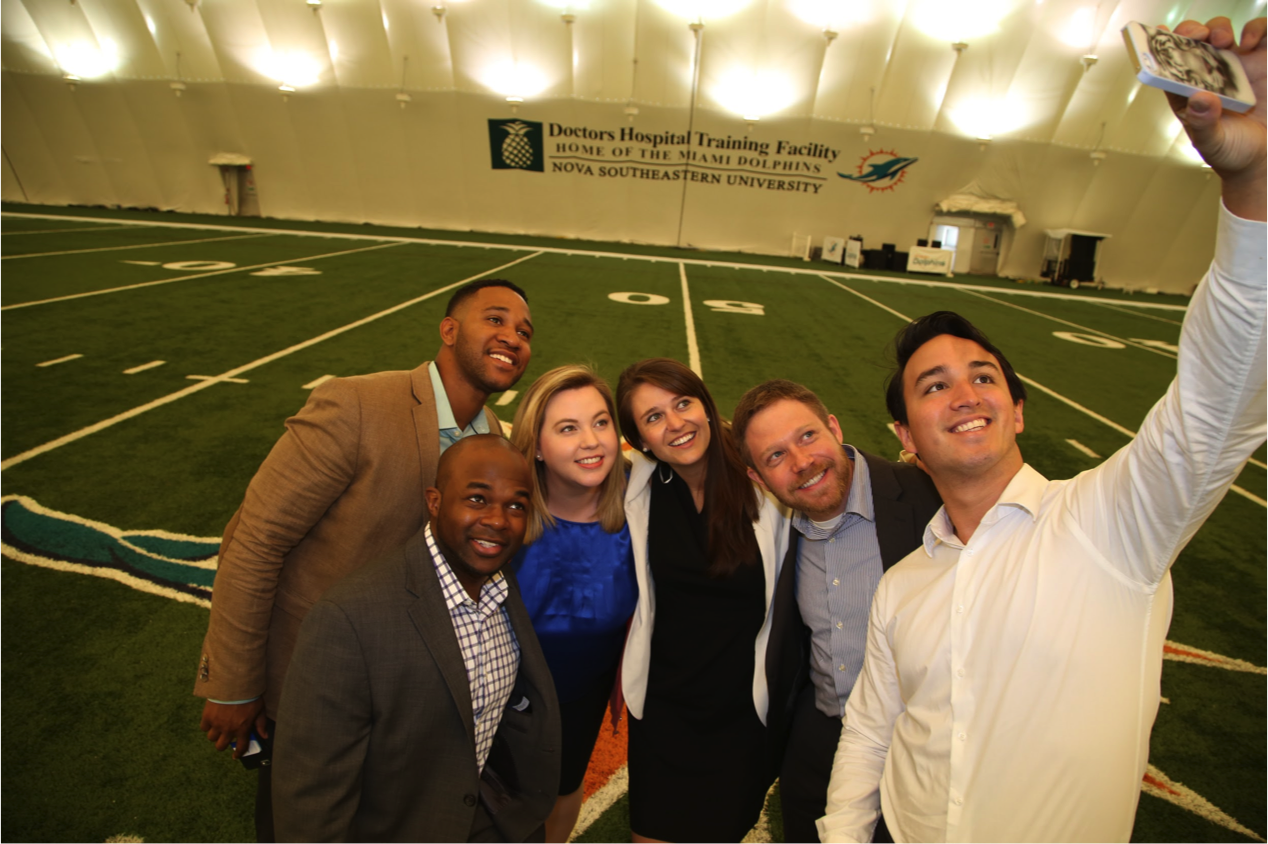 Sent from Ann Arbor as part of a Multidisciplinary Action Project, or MAP, the Ross students spent six weeks in the spring at Sun Life Stadium, which is undergoing a $400 million renovation. Their research included interviews with 50 employees of the Miami Dolphins. The organization has 300 employees, plus the players and coaches.

MAP, the cornerstone of the Ross Master of Business Administration degree, is one of the most intense and immersive action-based learning programs of its kind. Stephen Ross, the school’s largest benefactor, owns the Dolphins.

“This is very much an industry-driven environment with a lot of people who have been in sports for most of their careers,” said Aimee Grimshaw, a consultant at Booz Allen & Hamilton in Washington, D.C., before starting her MBA at Ross. “Something that makes this project even more compelling is that Dolphins’ employees see the unique potential of a corporate university here.”

Part of their task was to dig in and find out if there is more the organization can do for its players, said Dan Caspersen, senior vice president of human resources for the Dolphins and sponsor of the Ross MBA team.

“This is a great football organization, but we also can be a great learning organization, developing players for their lives after football,” Caspersen said. “All of that comes together as one very strong, unified Dolphins organization that’s going to be profitable and win Super Bowls.”

Up close in Miami 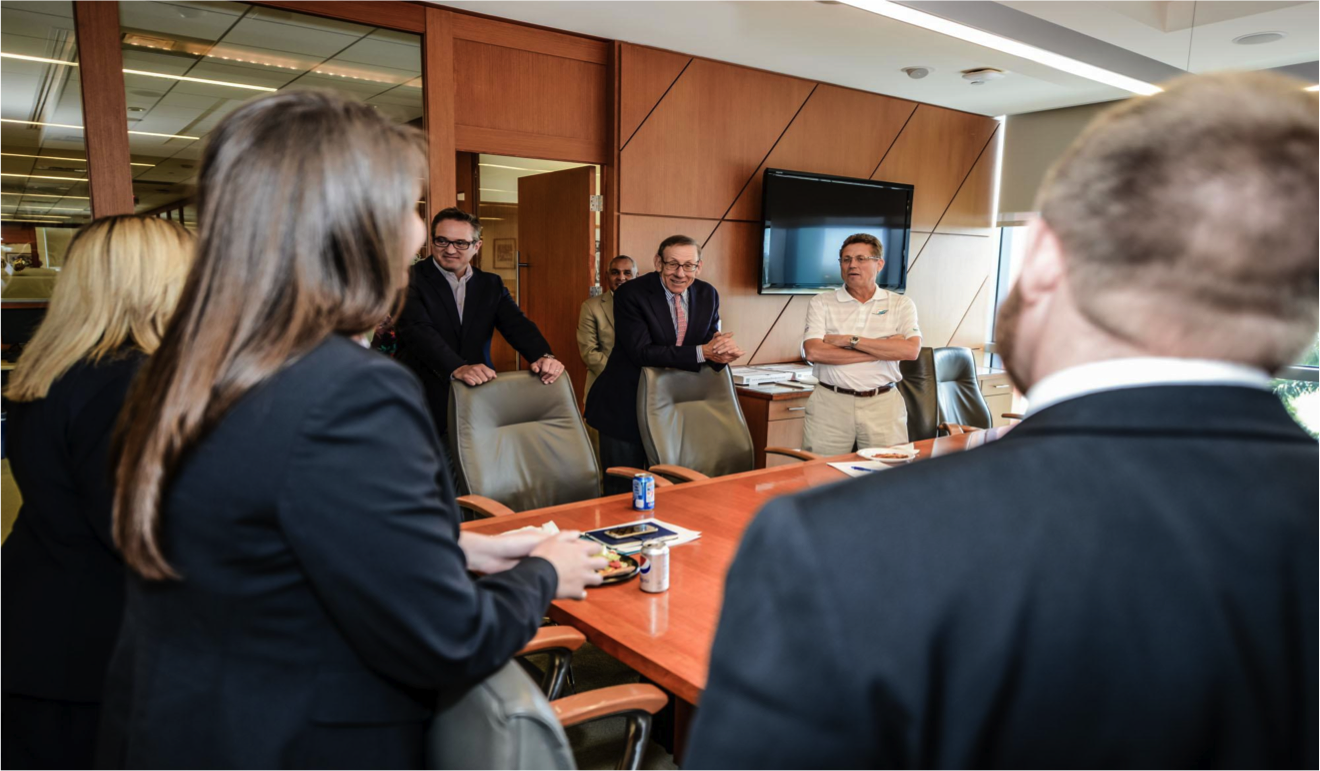 MBA students meet with Miami Dolphins executives Tom Garfinkel, president and CEO, Stephen M. Ross, chairman, and Dan Caspersen, senior vice president of human resources, during their project this spring to create Miami Dolphins University for the NFL team. Image credit: Angel ValentinOn a tour of the training facility, the students saw a tiered meeting room where the head coach addressed the team. Around the room, the walls held inspirational messages and large framed team photos from the Dolphins’ two Super Bowl wins in 1972 and 1973. A third frame was blank, ready to fill in.

“It’s just a constant reminder that the players are here to work,” said Bill Galante, senior vice president of operations.

Down the hall, they passed a player glistening with sweat as he came out of the weight room. “Heads up!” he said. In the player dining room, 2014 first-round draft pick and offensive tackle Ja’Wuan James answered the Ross students’ questions. One thing they will need to reconcile is the players’ busy schedule.

James explained that in the 16-plus week season, there is little time for anything other than training, travel and playing games. In the time from January to August, they are more available but also need to work around league restrictions.

John Thompson, an accountant at Ernst & Young, is focusing on financial aspects of the Ross MAP team’s recommendations. He said it’s often hard to see the effect that human resources policies and programs are having on the entire organization—but it’s there.

“You can imagine the financial implications across the organization of having a program like this,” Thompson said. “They’ll be able to increase their employee retention rate and be more attractive to high-quality candidates.”

Other Ross team members and most recent jobs are: Alexa Likens, who was in sales and training at Johnson & Johnson; Darryl Tricksey, a teacher development specialist at Teach For America in Houston; Jeffrey Gross, an operations manager at Christie’s auction house in New York; and C.J. Azubuine, event scheduling manager at Harvard Law School.

MAP has come a long way 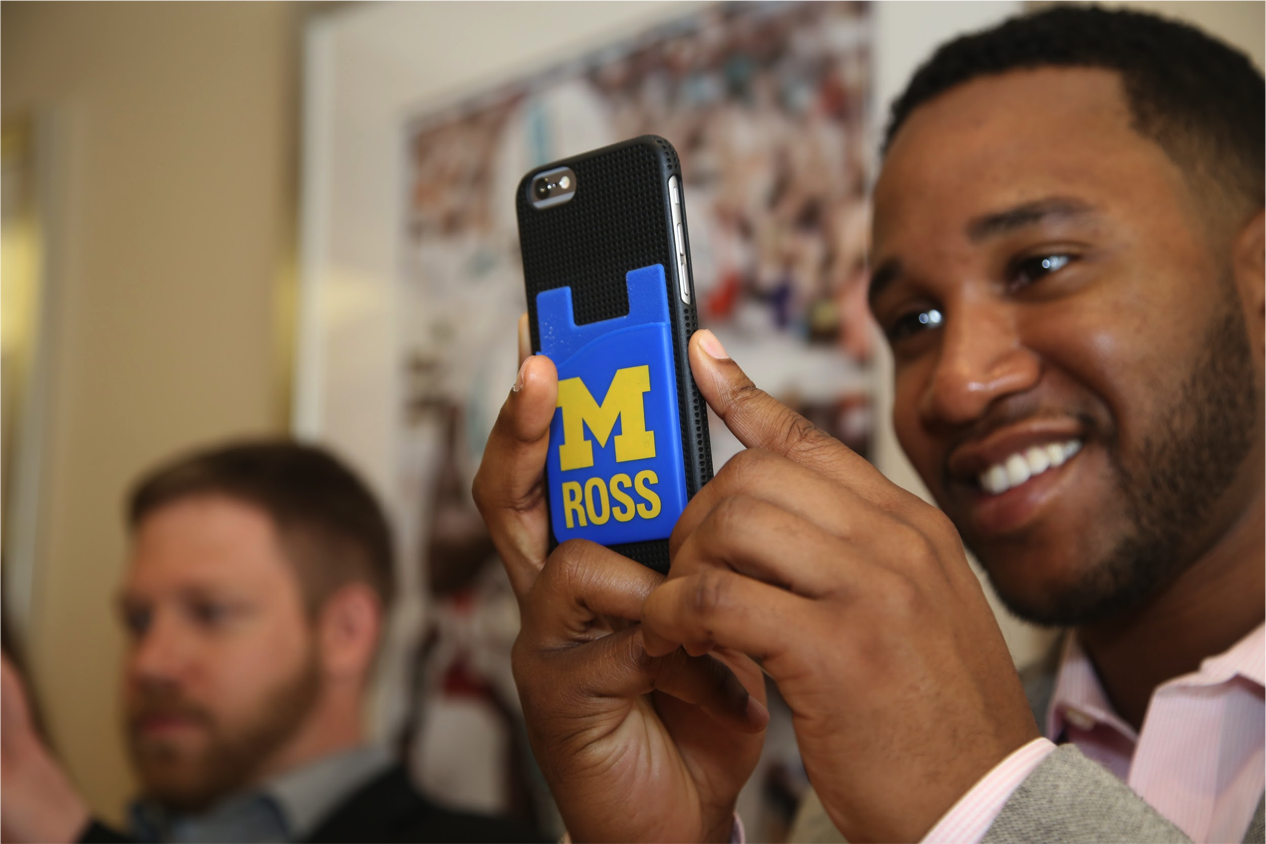 Darryl Tricksey, a University of Michigan Ross MBA, captures the moment at the Miami Dolphins headquarters during his Multidisciplinary Action Project. He was part of a team of six from Ross that designed a comprehensive learning and development program for the NFL team. Image credit: Angel ValentinThe MAP program launched in 1992 and its teams have completed more than 1,800 projects in 93 countries for more than 800 organizations. Industry leading companies and organizations from various fields such as consumer goods, health care, technology, finance, nonprofit and manufacturing sectors submit projects.

“MAP was a big determinant of my choosing Ross,” Tricksey said. “To see an organization like the Dolphins invest in human resource development is really, really exciting.”

Miami Dolphins CEO Tom Garfinkel, who earned his MBA at U-M and participated in a MAP project 15 years ago, said the students did a great job in their final presentation to the Dolphins organization. They shared leadership roles and seemed very collaborative, he said.

“The thing I love about the MAP program is it gives you an opportunity to learn in a practical, real-world setting how to apply critical thought and judgment to find solutions to challenges in business,” Garfinkel said. “They did a good job with that.”

Presenting the game plan
The Ross students also left the executives with a 70-page plan for implementing Dolphins University and a list of 10 other projects that could be done by future MAP teams. This is the first time the Dolphins have hosted Ross MBAs, but they plan to host another MAP team next year.

Other MAP activities this year include:

CJ Striebinger, an innovation manager at U.S. Cellular, said MAP students learn a lot from “basically being dropped into a company and having to navigate a new space and challenge.” 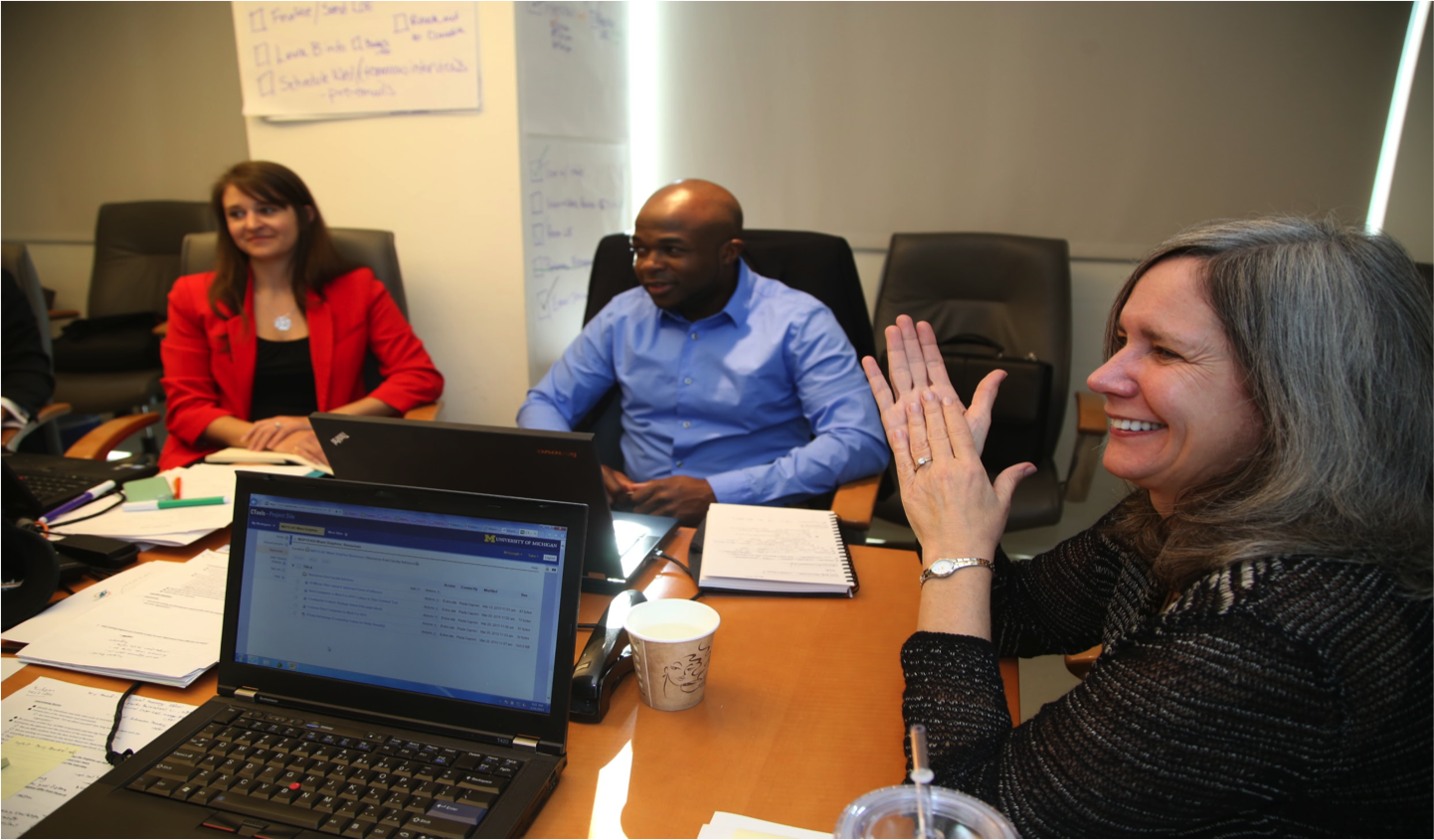 MBAs meet with one of their faculty advisors, Paula Caproni, at Miami Dolphins headquarters. Pictured students are Alexa Likens and C.J. Azubuine. They’re working on a Multidisciplinary Action Project, or MAP. The team of six designed a comprehensive learning and development program for the NFL team. Image credit: Angel ValentinThat’s where self-direction and leadership abilities really come through.

“The difference with Ross is we can take an important area that we want to invest in and dig deeper into it and helps us to push something very quickly,” he said. “With our mindset that we want to mentor them, and they want to learn something it’s a good pairing.”

All first-year MBAs and Ross School faculty compete for the projects. Students list their top 15 choices and an algorithm assigns the teams. The students are supported by two faculty members, a Ross librarian, a second-year MBA mentor or two and a company sponsor.

The teams must get to know each other and develop chemistry quickly, as the stakes are high and the term is short, said Paula Caproni, a Ross management professor working with the Miami Dolphins MAP team.

“We guide them through the MAP process by ensuring they have the support they need and are aware of all the checkpoints that increase their chances of success,” Caproni said. “The University of Michigan is one of the world’s leading research universities, and the MAP sponsors are delighted that they have access to this research mindset through the MAP teams.”

After the teams are announced at Ross in January, they meet to hash out goals, roles and responsibilities, and collaboration guidelines in a team charter. The Miami Dolphins team also met with their second-year MBA student mentors, Kareem Edwards and DeMarcus Simmons, who helped them assess their values and cultural differences.

“I actually think I’m learning more by coaching than I did participating in MAP last year,” Simmons said. “Now when I step back a year later and look at where this group is and where they need to be, it helps me to look at things from a managerial level. This for me has been really good practice for work as well.”

Edwards said that the MBA coaches’ role is to help the teams deliver the most value possible. Early on, he encouraged the team to go a little deeper on their deliverables, and deliver a long-lasting solution for their sponsor.

“This team represented Ross at its best—a group of smart students who face a complex problem and provide solutions in a brief time span,” Caproni said. “This is only possible if self-motivated students leverage all the resources they have inside and outside their team. This is a key learning from the MAP experience.”

Part of the guidance includes playing bad cop when necessary, said Dennis Oswald, an accounting professor, also advising the team. About midway through, he felt they needed a push toward finding out how other companies handle employee development and training.

“I was a little worried for the team because it can be difficult to get the needed access,” he said. “But the team leveraged all their contacts, reached out to faculty and Dolphins staff and leadership, and made the connections they needed to make.”

While the MAP team is in the field, they have a business librarian helping them navigate the 100 databases the university buys. They can find things you’d never bump into on Google, said Ross librarian Laura Berdish.

“I love this part,” Berdish said. “To help the students and be able to affect what they do. This is a real education.”