Science through the eyes of an artist 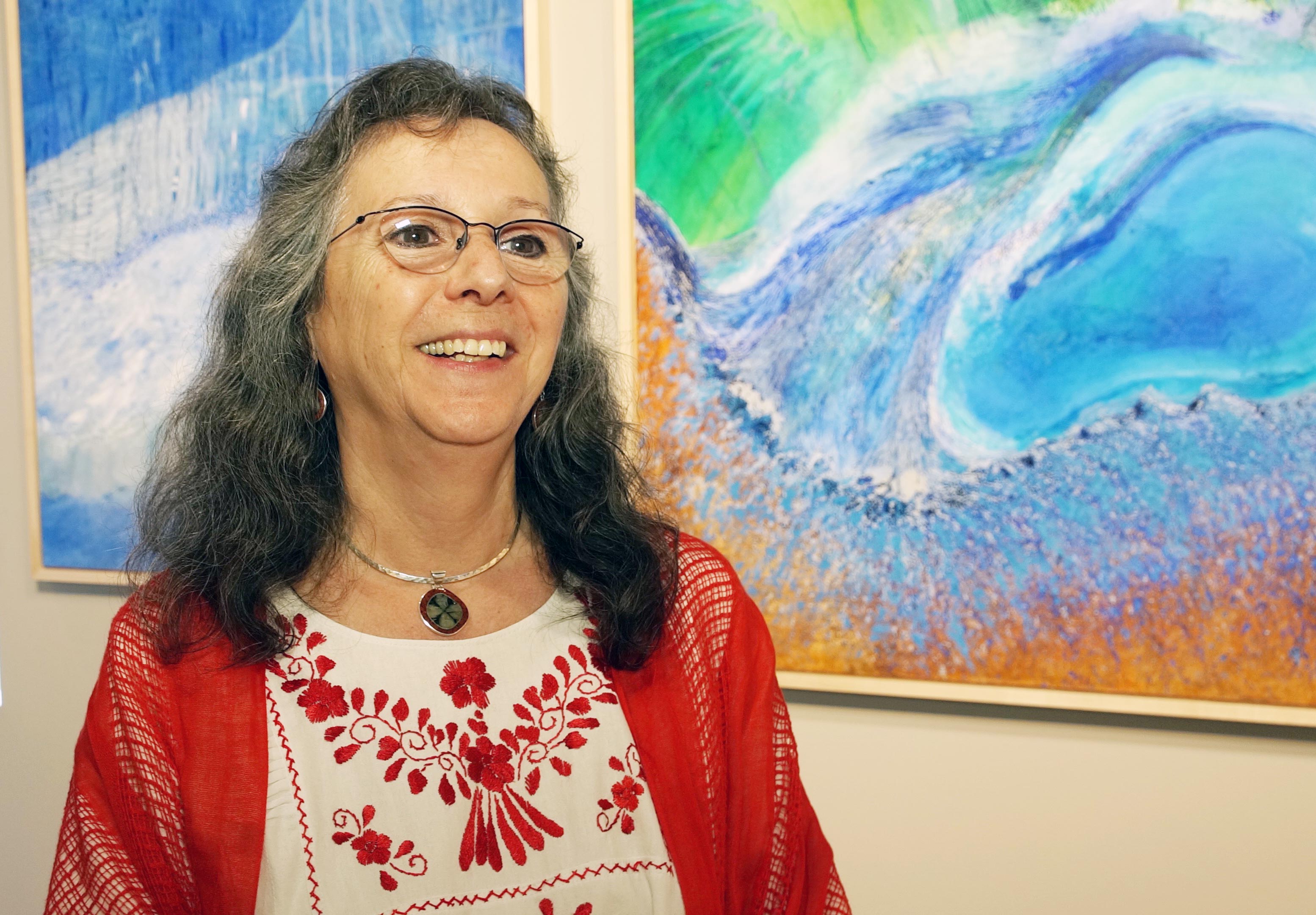 Sara Adlerstein-Gonzalez next to two of her paintings during her recent exhibit at WSG Gallery in downtown Ann Arbor. Image credit: Mike WoodANN ARBOR—”Don’t you feel like you’re taking a dip in the lake as you come into the gallery?” asks Sara Adlerstein-Gonzalez as she enters the Washington Street Gallery in downtown Ann Arbor, arms outreached as if she could feel the ocean breeze, paintings charged with blues and occasionally green and brown specks on both sides of the entrance.

“I planned it like this, so you really feel like you’re immersing yourself in the water,” she said, pointing at the paintings in her most recent art exhibit: “Here is to water, with love supreme.”

Originally from the city of Concepción on Chile’s coast, Adlerstein-Gonzalez fell in love with nature and art when she was quite young, a passion that she has carried throughout her career.

“When I was a kid, I was writing poetry, illustrating my poetry books, and later on I started being more aware of other mediums and started playing with oils and mixed media,” she said.

Adlerstein-Gonzalez studied biology at the Institute for Biological Sciences at the Universidad de Concepcion, and her research became more related to aquatic ecosystems as she focused her thesis on freshwater phytoplankton—microscopic organisms that inhabit the upper sunlit layer of almost all oceans and bodies of fresh water. Her research centered on the Maule River, one of Chile’s largest rivers.

When Meyhofer was offered a position at U-M seven years later, Adlerstein-Gonzalez joined the university’s School of Natural Resources and Environment as a research faculty member, conducting research mostly on aquatic ecology in Great Lakes populations and ecosystems.

“Art and science to me are very connected. They are one thing,” she said. “It’s the practice of art and science that makes better science and better art. It’s at that intersection where you can bring ideas and feelings. There’s so many layers and that’s what I try to teach in my class in arts and environment. It’s not the product per se. It’s the process.”

Walking around the gallery, she points out the different topics her paintings touch: human impact on the environment, death, the interconnectivity of terrestrial and aquatic systems, climate change.

A painting called “In my elements” has white clouds on top and deep blue at the bottom, with strokes of brown in the middle and lighter blue brushes on the white, It makes you feel like being in a plane surrounded by clouds, almost in a dream, she said.

“It captures that feeling of being everywhere but nowhere,” she said. “I think it has to be with life after death, when you become part of nature in a different way…integrated. Not like we are now that we think ourselves as separate. Here, we go back to where we came from: water, earth, some place there, the spirit floating.”

At U-M, Adlerstein-Gonzalez has created interdisciplinary courses in art and environment and participated in outreach and education projects about conservation through the arts. At SNRE, she created the Art and Environment Gallery to feature work that speaks to how people interact and understand the environment and to draw attention to the role of art in environmental education and stewardship.

This fall, she’s teaching “Arte y Naturaleza” (Art and Nature) at the Residential College, a course in Spanish that will examine the connections between culture and nature and how one influences and changes the other.

“Science helps us understand the world where we live and how it is affected by us, but that is not always enough to make us care,” she said. “Art helps us understand ourselves, and in its universal language can speak to our senses, produce emotion and open our hearts to embrace the changes needed.”