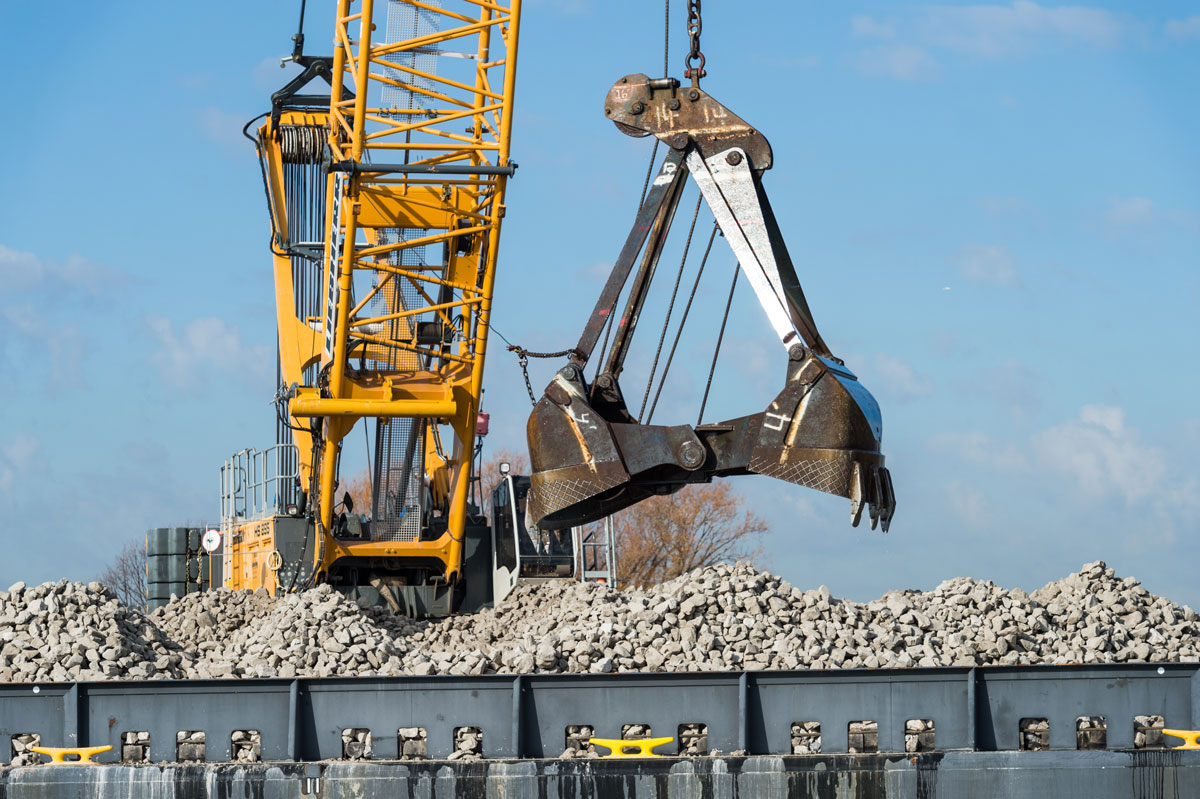 The latest spawning reefs in the Detroit River, near Belle Isle, were built from blocks of broken limestone 4 to 8 inches in diameter. Loads of rock were placed directly on the river bottom using a crane with a clamshell bucket mounted on a barge in the river. Image credit: Austin Thomason, Michigan Photography

DETROIT—Construction crews recently deposited 25,000 tons of limestone blocks on the bottom of the Detroit River in the latest phase of a decade-plus effort to lure lake sturgeon to rock spawning reefs and help restore severely depleted populations of the once-common Great Lakes giants.

Researchers know the reefs work because they’ve collected sturgeon eggs there and have underwater video showing the huge fish spawning. But where do the baby fish go after they hatch and leave the shelter of the rock reefs? Researchers have spent years searching for those youngsters, without much to show for their efforts.

Now a study of the St. Clair River by two University of Michigan scientists suggests the experts may have been looking in the wrong place all along. The U-M researchers show that despite river-current speeds of more than 3 feet per second, some recently hatched lake sturgeon manage to remain in the St. Clair’s North Channel, a surprising finding with implications for the siting of future spawning reefs.

“Our work showed that these very young sturgeon stay in the channel instead of going downstream into the river delta or to Lake St. Clair, as people had assumed,” said U-M doctoral candidate Joseph Krieger, first author of a paper published online Dec. 1 in the Canadian Journal of Fisheries and Aquatic Sciences.

The St. Clair River is about 40 miles long and drains waters from Lake Huron into Lake St. Clair. The Detroit River drains Lake St. Clair into Lake Erie. Beginning in the early 1900s, both rivers were straightened, widened and deepened to create shipping canals for large freighters. The construction stripped away much of the rocky habitat that sturgeon and other native fish used for spawning.

Today, the St. Clair River averages 43 to 49 feet in depth and moves more than 175,000 cubic feet of water per second—more than the Missouri, Arkansas and Illinois rivers combined. 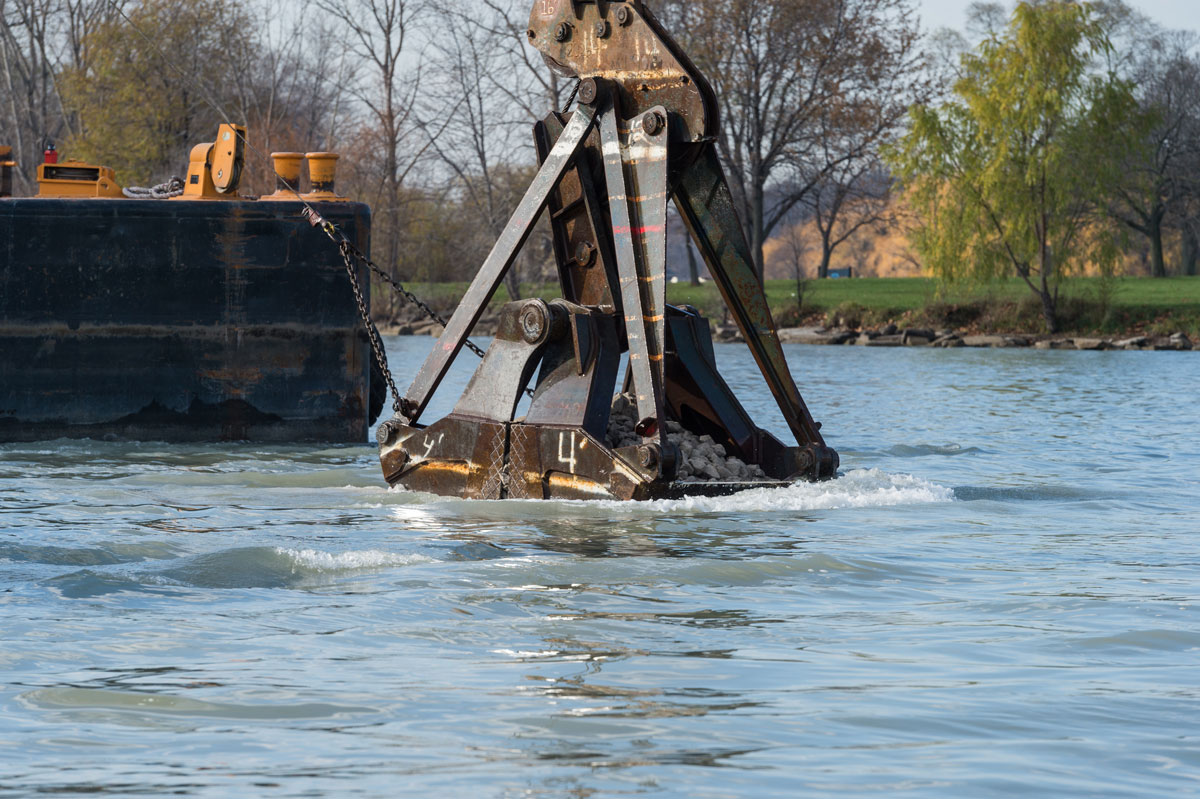 Loaded buckets were lowered to the river bottom before the rock was released. The latest Belle Isle reefs are located in water that is 18 to 22 feet deep, and they rise about 2 feet above the river bottom. About 4 acres of new rock reefs were created and are located outside commercial shipping channels. Image credit: Austin Thomason, Michigan Photography

“There’s no way these tiny sturgeon larvae have the strength to swim against that current,” Krieger said. “The only way for them to stay in the river channel is to burrow into the sediment on the bottom or to hide behind small rocks. And that’s exactly what we think they are doing.”

Krieger spent three summers doing fieldwork on the St. Clair and Detroit rivers to collect data for his doctoral dissertation at the U-M School of Natural Resources and Environment. He is expected to graduate in April.

The Canadian Journal article is based on his dissertation work on the St. Clair River and is co-authored by his doctoral adviser, U-M fishery biologist Jim Diana. A paper summarizing his findings from the Detroit River will be submitted for publication in a peer-reviewed journal later this year.

The fieldwork involved placing drift nets on the bottom of the river channels, at various distances downstream from artificial spawning reefs, and looking for sturgeon larvae. That work was done with researchers from the U.S. Geological Survey. Additional fieldwork was done in collaboration with the U.S. Fish and Wildlife Service and the Michigan Department of Natural Resources.

A big part of the project by Krieger and Diana involved creating computer models to evaluate the amount, quality and spatial distribution of different habitat types used by young lake sturgeon in the St. Clair and Detroit rivers. The researchers then tested their habitat suitability model by comparing its predictions to field observations.

In the St. Clair River, 91 percent of the 283 larval sturgeon netted by Krieger were clustered at three North Channel locations no more than 1.2 miles downstream from Maslinka Reef, a known sturgeon-spawning site formed in the early 1900s when steamships dumped coal cinders into the river.

Most of the larvae were taken in areas designated as high-quality habitat by the computer model. No larvae were found exiting the North Channel into Lake St. Clair. 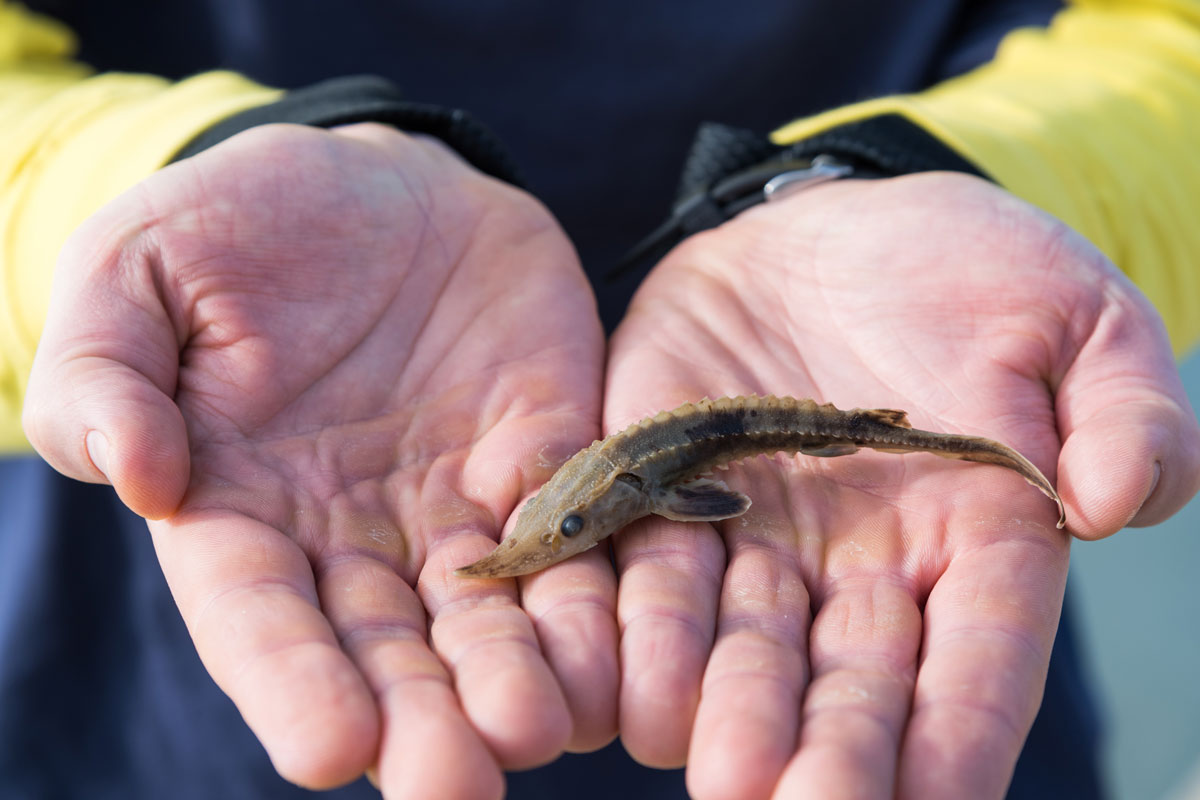 A museum specimen of a baby lake sturgeon. This individual would have been several months old. Lake sturgeon this size are rarely found in the Detroit and St. Clair rivers. Image credit: Austin Thomason, Michigan Photography

The three North Channel clusters were at river bends where the bottom is a mix of sand and silt and contains moderate densities of the larval insects that baby sturgeon eat. The current speeds in these sections of the river are highly variable, and water depths typically exceed 30 feet.

Larval sturgeon were collected at these locations up to four weeks after the eggs hatched on Maslinka Reef, meaning the baby fish were not swept downstream into Lake St. Clair as soon as they hatched—as the experts had long believed. Instead, they remained in the swiftly moving channel.

“We had thought that these little fish couldn’t fight the current and within a day they’d be out in Lake St. Clair,” said Diana, who is a professor at U-M’s School of Natural Resources and Environment and director of Michigan Sea Grant, a federally funded collaboration between U-M and Michigan State University.

“But it looks like they can manage to stay in place against the current by burrowing into the bottom, and that was a surprise. For a little fish that’s an inch long at most, in a current that’s a meter per second, that was unexpected.”

Diana has been involved in sturgeon research on the St. Clair River system since the early 1990s and has had five other U-M graduate students who worked on some aspect of the spawning reefs and sturgeon populations.

The population of adult lake sturgeon in Lake St. Clair and the St. Clair River is estimated at around 10,000, according to Diana. The estimates are based on sturgeon tagged by the Michigan Department of Natural Resources. 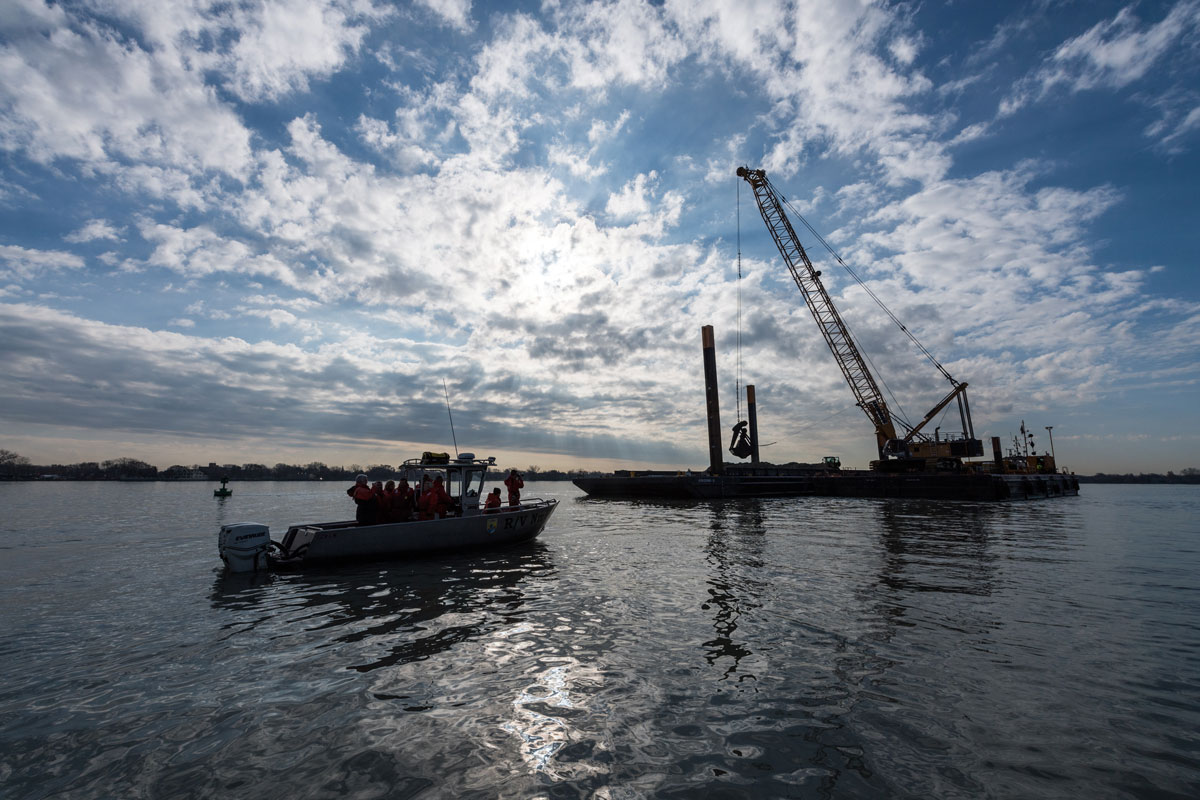 A view of the reef-building barge and crane during construction on the Detroit River, just upstream of Belle Isle, in early December. Image credit: Austin Thomason, Michigan Photography

Roughly 90 percent of those adult sturgeon are believed to be in Lake St. Clair, rather than the river, Diana said. They move into the lake when they are 5 to 10 years old after spending their first years in “nursery habitat.”

Researchers had assumed the nursery for St. Clair sturgeon was the shallow delta wetlands, filled with cattails and phragmites reeds, where the river empties into the lake. But the new study shows that there is “an abundance of suitable nursery habitat” further upstream, within the North Channel.

When considering possible spawning reef sites in the future, the habitat suitability model could help identify high-quality nursing habitat, then reef sites could be selected a short distance upstream from those locations, Krieger and Diana wrote.

Jennifer Read, director of the U-M Water Center and lead investigator for the reef project, said the new research helps address “a big gap in our knowledge.”

“Once the larvae leave the reef, where do they go?” Read said. “This study’s results will help inform our siting decisions so that we spend management dollars in the most effective way possible.”

The U.S. government has provided about $10 million for a series of reef projects in the St. Clair and Detroit rivers, much of it through the Great Lakes Restoration Initiative, with additional support from cooperating agencies and private sector partners.

The Detroit-area restoration effort began in 2004 with completion of 0.28 acres of reefs in the Detroit River near Belle Isle. The approaches and techniques for siting and reef construction are updated as new information comes in, Read said. 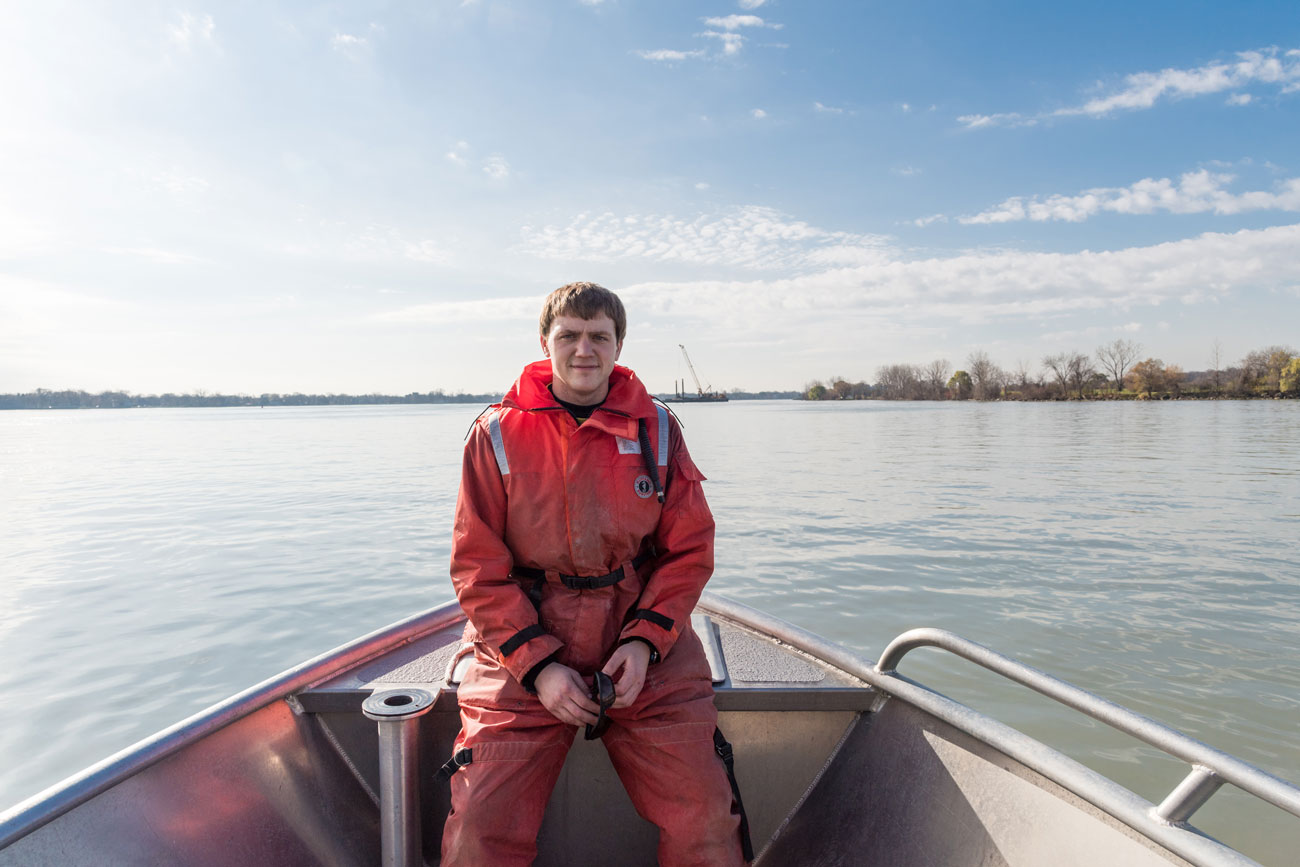 “We learn as we go, and we make changes,” Read said.

Lake sturgeon are considered threatened or endangered in seven of the eight Great Lakes states. Their current population is estimated to be about 1 percent of what it once was.

They are the largest fish in the Great Lakes can grow to 7 feet in length, weighing up to 300 pounds. Female sturgeon live 80 to 150 years, while males live an average of 55 years, according to Michigan Sea Grant.

Females take 20 to 25 years to reach reproductive age, while males take 15 years. Because it takes so long for lake sturgeon to reach sexual maturity, it will also take years to know whether the reef-building project is significantly boosting the sturgeon population, said Gregory Kennedy, a fishery biologist with the U.S. Geological Survey. 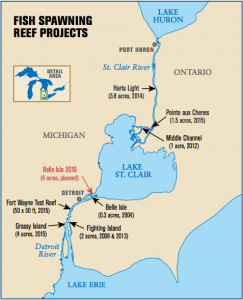 “If success means bringing egg deposition to the reefs, then most of these reefs are pretty successful,” Kennedy said last month during a tour of the Belle Isle reef-construction site. He began studying Detroit-area sturgeon in the late 1990s.

“But are we improving recruitment? Are we adding new young to the population?” he said. “It could be 20 or 30 years before we get any real feel for that.”

“We’re restoring a wild fish population inside the city of Detroit, and it’s going to take some time,” U-M’s Read said during the Detroit River tour. “The destruction of this habitat took several decades, and so will the restoration.”