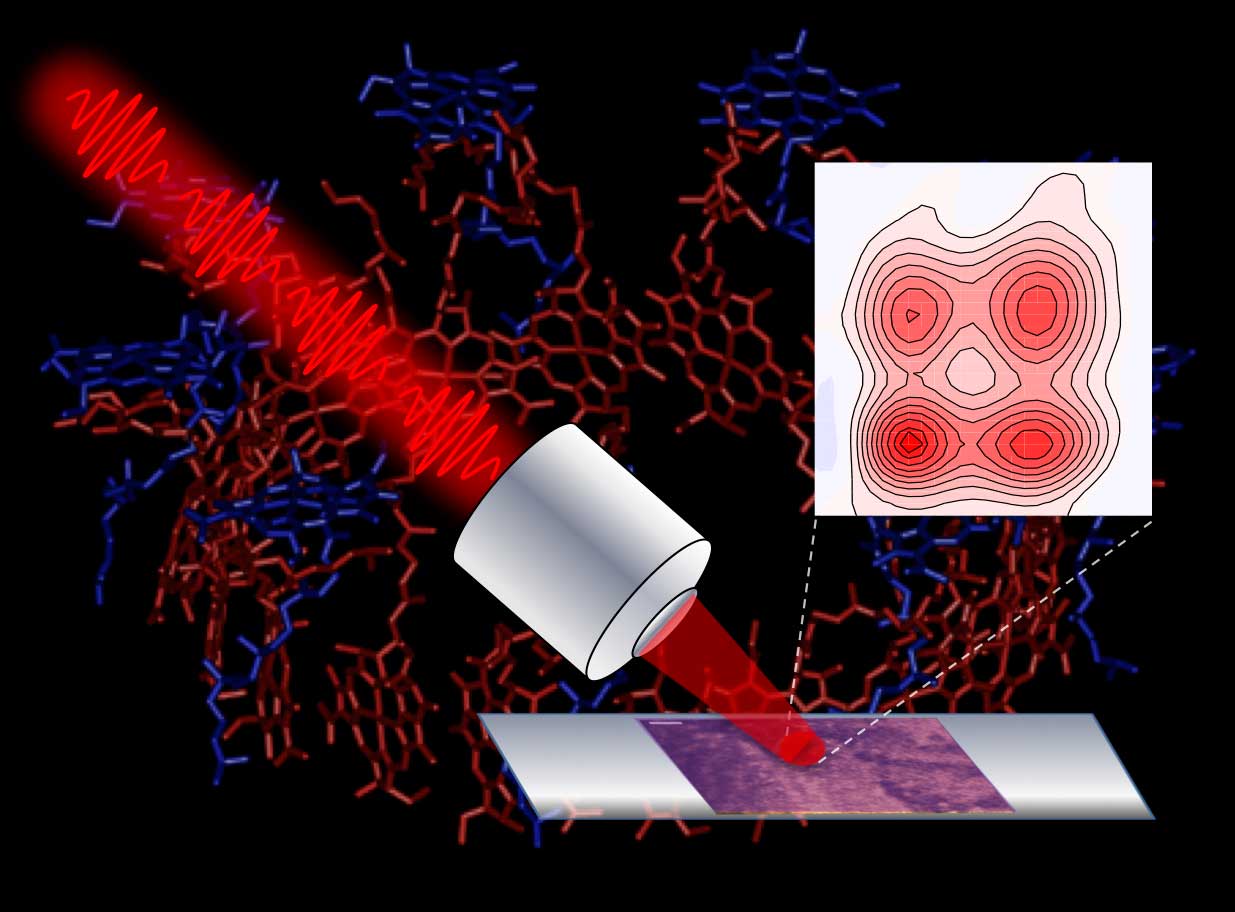 ANN ARBOR—University of Michigan researchers have developed a powerful microscope that can map how light energy migrates in photosynthetic bacteria on timescales of one-quadrillionth of a second.

In photosynthetic plants and bacteria, light hits the leaf or bacteria and a system of tiny light-harvesting antenna shuttle it along through proteins to what’s called a reaction center. Here, light is “trapped” and turned into metabolic energy for the organisms.

Jennifer Ogilvie, U-M professor of physics and biophysics, and her team want to capture the movement of this light energy through proteins in a cell, and the team has taken one step toward that goal in developing this microscope. Their study has been published in Nature Communications.

Ogilvie, graduate student Yassel Acosta and postdoctoral fellow Vivek Tiwari worked together to develop the microscope, which uses a method called two-dimensional electronic spectroscopy to generate images of energy migration within proteins during photosynthesis. The microscope images an area the size of one-fifth of a human blood cell and can capture events that take a period of one-quadrillionth of a second.

The instrument combines this method with a microscope to measure a signal from nearly a million times smaller volumes than before. Previous measurements imaged samples averaged over sections that were a million times larger. Averaging over large sections obscures the different ways energy might be moving within the same system.

“We’ve now combined both of those techniques so we can get at really fast processes as well as really detailed information about how these molecules are interacting,” Ogilvie said. “If I look at one nanoscopic region of my sample versus another, the spectroscopy can look very different. Previously, I didn’t know that, because I only got the average measurement. I couldn’t learn about the differences, which can be important for understanding how the system works.”

In developing the microscope, Ogilvie and her team studied colonies of photosynthetic purple bacterial cells. Previously, scientists have mainly looked at purified parts of these types of cells. By looking at an intact cell system, Ogilvie and her team were able to observe how a complete system’s different components interacted.

Similarly, this microscope can help scientists understand how organic photovoltaic materials work, Ogilvie says. Instead of the light-harvesting antennae complexes found in plants and bacteria, organic photovoltaic materials have what are called “donor” molecules and “acceptor” molecules. When light travels through these materials, the donor molecule sends electrons to acceptor molecules, generating electricity.

“We might find there are regions where the excitation doesn’t produce a charge that can be harvested, and then we might find regions where it works really well,” Ogilvie said. “If we look at the interactions between these components, we might be able to correlate the material’s morphology with what’s working well and what isn’t.”

In organisms, these zones occur because one area of the organism might not be receiving as much light as another area, and therefore is packed with light-harvesting antennae and few reaction centers. Other areas might be flooded with light, and bacteria may have fewer antennae—but more reaction centers. In photovoltaic material, the distribution of donor and receptor molecules may change depending on the material’s morphology. This could affect the material’s efficiency in converting light into electricity.