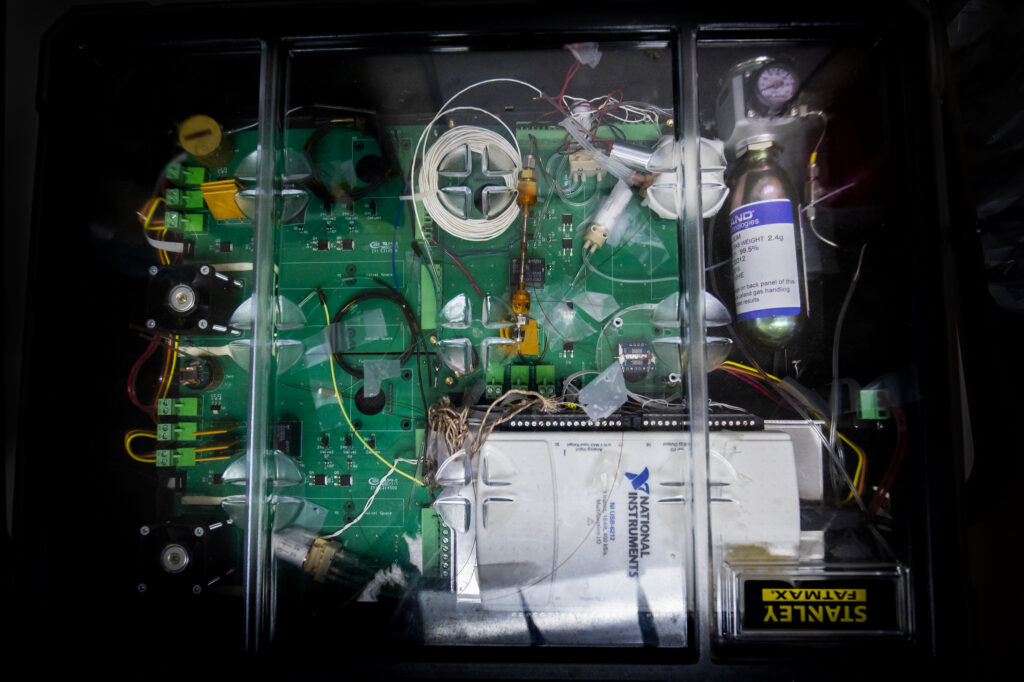 Looking inside the protective covering of a portable breath monitor developed by the University of Michigan that can quickly and accurately detect acute respiratory distress syndrome (ARDS) inside the critical care unit at the University of Michigan Hospital on July 2, 2019. Photo by Robert Coelius/Michigan Engineering, Communications and Marketing

To detect the condition today, doctors rely heavily on their own judgment and time-consuming tests. The researchers say their new technology could improve survival rates and lower the cost of care.

The device—a gas chromatography system—can diagnose ARDS with nearly 90% accuracy in as little as 30 minutes. In addition, its speed and cost-effectiveness allow it to essentially serve as a real-time monitor for patients, helping to focus and adjust treatments in progress. Forty-eight patient volunteers at the U-M hospital, 21 with ARDS, participated in testing the device. 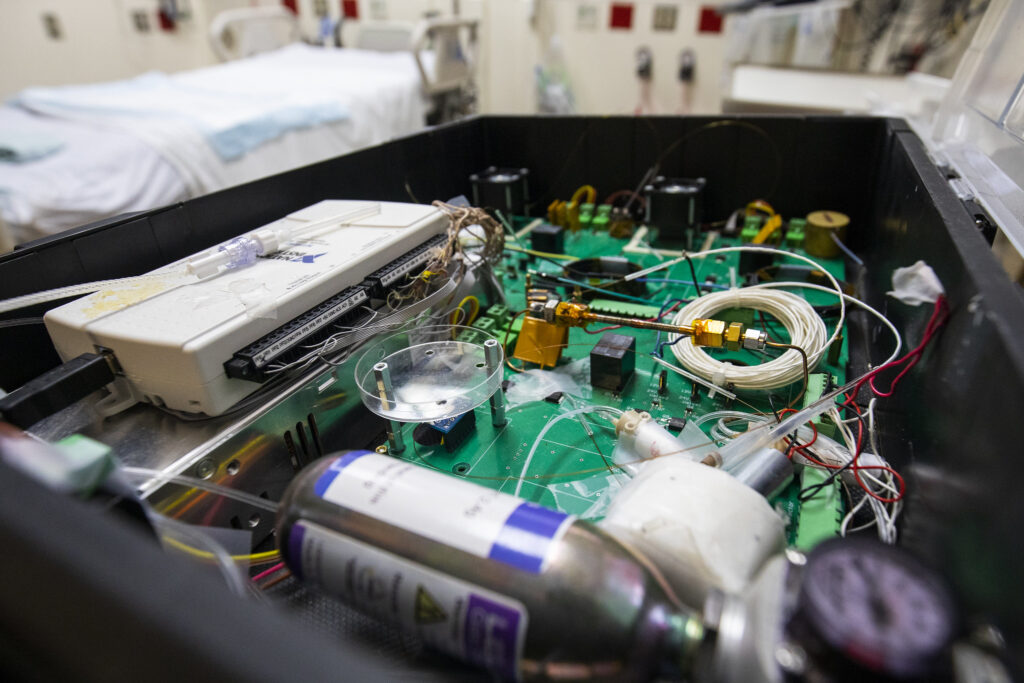 Inside the protective covering of a portable breath monitor. Photo by Robert Coelius/Michigan Engineering, Communications and Marketing

“The most commonly used ARDS prediction tools are only correct about 18% of the time,” said Xudong (Sherman) Fan, U-M professor of biomedical engineering. “We’ve found that if our device tells us the patient is positive for ARDS, it’s highly likely that they’re positive.

We are able to detect the onset and improvement of the condition before traditional changes in X-rays and blood testing would occur. 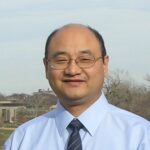 “We are able to detect the onset and improvement of the condition before traditional changes in X-rays and blood testing would occur.”

U-M’s research appears in the journal Analytical and Bioanalytical Chemistry.

ARDS is a severe state of lung inflammation that can be caused by pneumonia, sepsis, trauma, aspiration or a combination of these. It carries a high mortality rate. In the U.S. each year, 200,000 cases are diagnosed, resulting in 74,000 deaths.

Many that survive are left with poor lung function and have great difficulty returning to routine daily activities. There is no cure for ARDS, and mechanical ventilation in an intensive care unit is usually required to support the patient until the lung heals. Detecting it early improves patients’ outcomes.

U-M’s first-of-its-kind device samples a patient’s breath through tubing connected to the exhalation port of a mechanical ventilator. It analyzes nearly 100 volatile organic compounds—biomarkers that can not only detect ARDS, but also determine how far along the disease is. As treatment begins, the device can monitor its effectiveness.

Currently, a doctor who suspects ARDS will order a chest X-ray and blood tests. The first is expensive and exposes the patient to radiation, and the second is invasive. The combination can take hours to completely analyze, and those results represent one snapshot in time. To know if the condition is improving or worsening, they must be repeated.

“Our ability to improve outcomes with ARDS has been basically halted by the lack of technologies that can rapidly and accurately diagnose the disease early as well as track its progress,” said Kevin Ward, U-M professor of emergency medicine and biomedical engineering. “All our current methods result in us treating the disease too late or not having information that tells us if our therapies are making a difference soon enough.

By utilizing exhaled breath, the technology we have developed solves both problems and opens up significant opportunities to allow us to treat earlier and to develop a host of precision medicine therapies for ARDS. 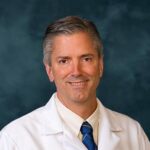 “By utilizing exhaled breath, the technology we have developed solves both problems and opens up significant opportunities to allow us to treat earlier and to develop a host of precision medicine therapies for ARDS.”

Fan and Ward see ARDS as the first of many conditions that could be better identified and tracked with this new technology.

“The technology should also be extremely useful in detecting and following the course of many other diseases such as pneumonia, sepsis, asthma and others associated with either lung or systemic blood inflammation,” Ward said. 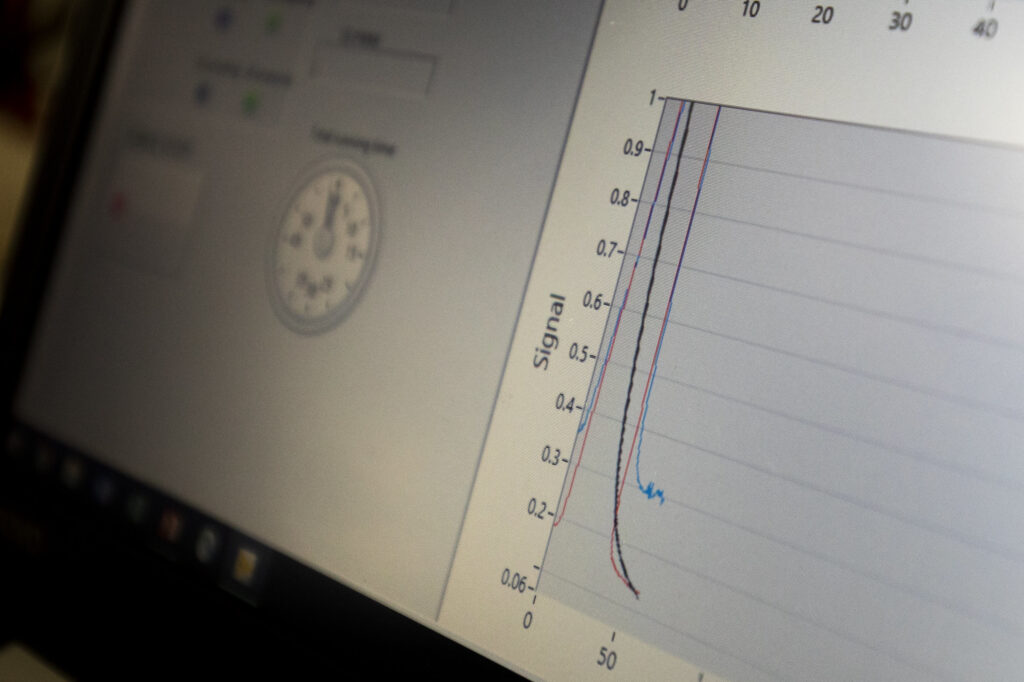 Seeing the results of a portable breath monitor. Photo by Robert Coelius/Michigan Engineering, Communications and Marketing

Fan and his research team specialize in analyzing biomarkers, substances in bodily fluids like saliva, breath, urine and sweat that can tell us much about what’s going on—that can indicate the presence of particular conditions.

The gas chromatography system is the result of a research and development partnership with the Michigan Center for Integrative Research in Critical Care. Its development was supported through the University of Michigan’s FFMI MTRAC program as well as National Institutes of Health R-21 and NCAI grants.

The university is pursuing patent protection for the intellectual property and is seeking commercialization partners to help bring the technology to market.