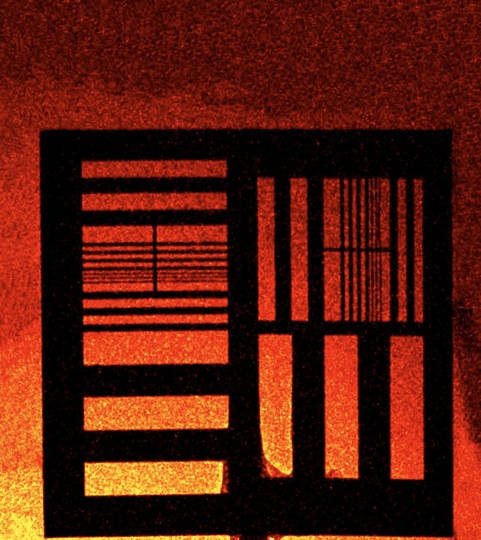 The image shows an x-ray radiograph of a resolution test target. It demonstrates that the x-rays produced with a table-top laser plasma interaction have a source size of one micrometer and a peak brightness comparable to 3rd generation synchrotrons. The image was taken in a single shot exposure of 30 femtoseconds. Credit: Stefan Kneip and Chris McGuffeyANN ARBOR—Ultra-short X-ray beams produced at the University of Michigan could one day serve as more sensitive medical diagnostic tools, and they could work like strobe lights to allow researchers to observe chemical reactions that happen in quadrillionths of a second.

The researchers used the HERCULES high-intensity, table-top laser to create X-ray beams that rival those made in expensive and massive synchrotron particle accelerators. The National Synchrotron Light Source II, for example, under construction at Brookhaven National Laboratory, is slated to be a half-mile long. It’s expected to cost more than $900 million.

Researchers at Imperial College London and Instituto Superior TÉcnico Lisbon collaborated with U-M on this research, which is published online in Nature Physics and will appear in a forthcoming print edition.

“The development of accelerators and light sources has led to these very large systems and facilities that can only be accessed with a lot of preparation, by a few researchers,” said Chris McGuffey, a doctoral student in the U-M Department of Nuclear Energy and Radiological Sciences. “We’re bringing them to the university budget and university-scale laboratories. We expect this to open up more research possibilities.”

Throughout history, X-ray machines have opened new frontiers in science, the researchers say. Earlier generations illuminated the structure of DNA and brought the first radiographs, which enabled imaging the human body. These newest developments are expected to allow researchers to measure and observe never-before-seen femtosecond atomic and molecular interactions.

“Our findings show that it is possible to use lasers to produce an X-ray source for potential medical applications which is much more compact than conventional ones,” said Karl Krushelnick, associate director of the U-M Center for Ultrafast Optical Science.

“This X-ray source also has the unique property that it is emitted in pulses that have an ultra-short duration so that so it can be used in science to measure processes with unprecendented temporal resolution.”

At 10 femtoseconds, or 10 quadrillionths of a second, the new beams are the shortest-pulse X-ray beams every created, McGuffey said.

Scientists and engineers have been trying to coax lasers to generate these bright, pointed X-ray beams for some time, McGuffey said.

“The field has been focusing a lot on making good electron beams so that we could use those to make X-ray beams. It turns out the electron beams are already plenty good enough. The X-rays have been there all along, but no one knew to look for them,” McGuffey said.

Experiments were conducted at the U-M Center for Ultrafast Optical Science. The paper is titled “Bright spatially-coherent synchrotron X-rays from a table-top source.” This research is funded by the National Science Foundation and the Department of Homeland Security.