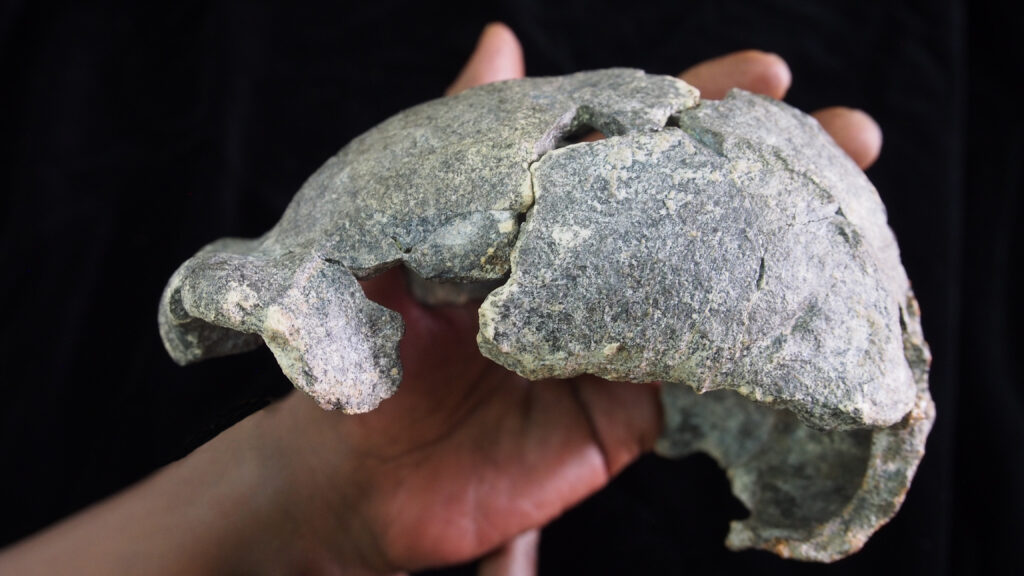 Both crania, assigned to Homo erectus, were associated with simple Oldowan-type (Mode 1) and more complex Acheulian (Mode 2) stone tool assemblages. This suggests that H. erectus had a degree of cultural/behavioral plasticity that has yet to be fully understood.

The team was led by Sileshi Semaw of the Centro Nacional de Investigación sobre la Evolución Humana (CENIEH) in Spain and Michael Rogers of Southern Connecticut State University. U-M geologist Naomi Levin coordinated the geological work to determine the age of the fossils and their environmental context.

The team’s findings were published March 4 in the journal Sciences Advances.

Gona is located in the Afar Triangle of Ethiopia, adjacent to the well-known Middle Awash and Hadar study areas, where the famous skeletons “Ardi” and “Lucy” were found, respectively. 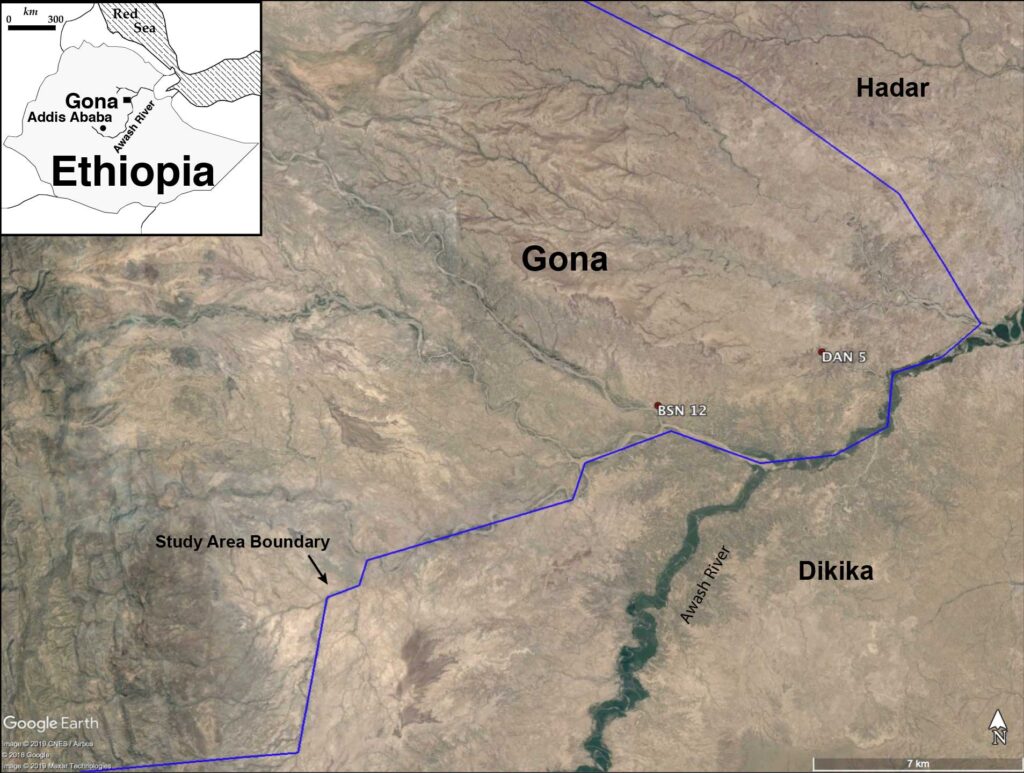 GoogleEarth Map of the Gona study area, showing locations of BSN12 and DAN5. 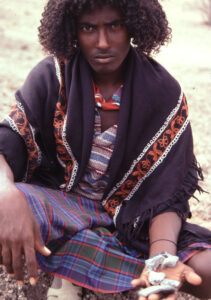 The BSN12 partial cranium is robust and large, while the DAN5 cranium is smaller and more gracile, suggesting that H. erectus was probably a sexually dimorphic species. Remarkably, the DAN5 cranium has the smallest endocranial volume documented for H. erectus in Africa, about 590 cubic centimeters, probably representing a female.

The smallest Homo erectus cranium in Africa, and the diverse stone tools found at Gona, show that human ancestors were more varied, both physically and behaviorally, than previously known, according to the researchers.

This physical diversity is mirrored by the stone tool technologies exhibited by the artifacts found in association with both crania. Instead of only finding the expected large handaxes or picks, signature tools of H. erectus, the Gona team found both well-made handaxes and plenty of less-complex Oldowan tools and cores.

The toolmakers at both sites lived in close proximity to ancient rivers, in settings with riverine woodlands adjacent to open habitats. The low δ13C isotope value from the DAN5 cranium is consistent with a diet dominated by C3 plants (trees and shrubs, and/or animals that ate food from trees or shrubs) or, alternatively, broad-spectrum omnivory.

U-M’s Levin joined the research team as a master’s student in 2001 and ultimately became the lead geologist. She coordinated the effort to date the fossils and to determine their environmental context, working with an interdisciplinary team from several institutions.

The ages of the fossils and the associated artifacts were constrained using a variety of techniques: standard field mapping and stratigraphy, as well as analyses of the magnetic properties of the sediments, the chemistry of volcanic ashes, and the distribution of argon isotopes in volcanic ashes.

“Constraining the age of these sites proved particularly challenging, requiring multiple experts using a range of techniques over several years of field work,” said Levin, an associate professor in the U-M Department of Earth and Environmental Sciences and in the Program in the Environment.

“This is a great example of scientific detective work and how science gets done, drawing on a community of scholars and their collective knowledge of the geology of eastern Africa,” said Levin, who co-directs an isotope geochemistry lab that conducts studies of ancient environments using carbon and oxygen isotopes.

Along with University of Arizona geologist Jay Quade, Levin also coordinated the environmental reconstruction of the Gona sites.

At the Gona study area in Ethiopia’s Afar State, H. erectus used locally available stone cobbles to make their tools, which were accessed from nearby riverbeds. Fossil fauna were abundant at the BSN12 site, but cut marks or hammerstone-percussed bones were not identified.

At the DAN5 site, an elephant toe bone was found with stone tool cut marks, and a small antelope leg bone had a percussion notch, implying that H. erectus butchered both large and small mammals, though it is not clear whether they hunted or scavenged their prey.

There is a common view that early Homo (e.g., Homo habilis) invented the first simple (Oldowan) stone tools, but when H. erectus appeared about 1.8 to 1.7 million years ago, a new stone tool technology called the Acheulian, with purposefully shaped large cutting tools such as handaxes, emerged in Africa.

The timing, causes and nature of this significant transition to the Acheulian by about 1.7 million years ago is not entirely clear, though, and is an issue debated by archaeologists.

The authors of the Science Advances paper said their investigations at DAN5 and BSN12 have clearly shown that Oldowan technology persisted much longer after the invention of the Acheulian, indicative of a particular behavioral flexibility and cultural complexity practiced by H. erectus, a trait not fully understood or appreciated in paleoanthropology. 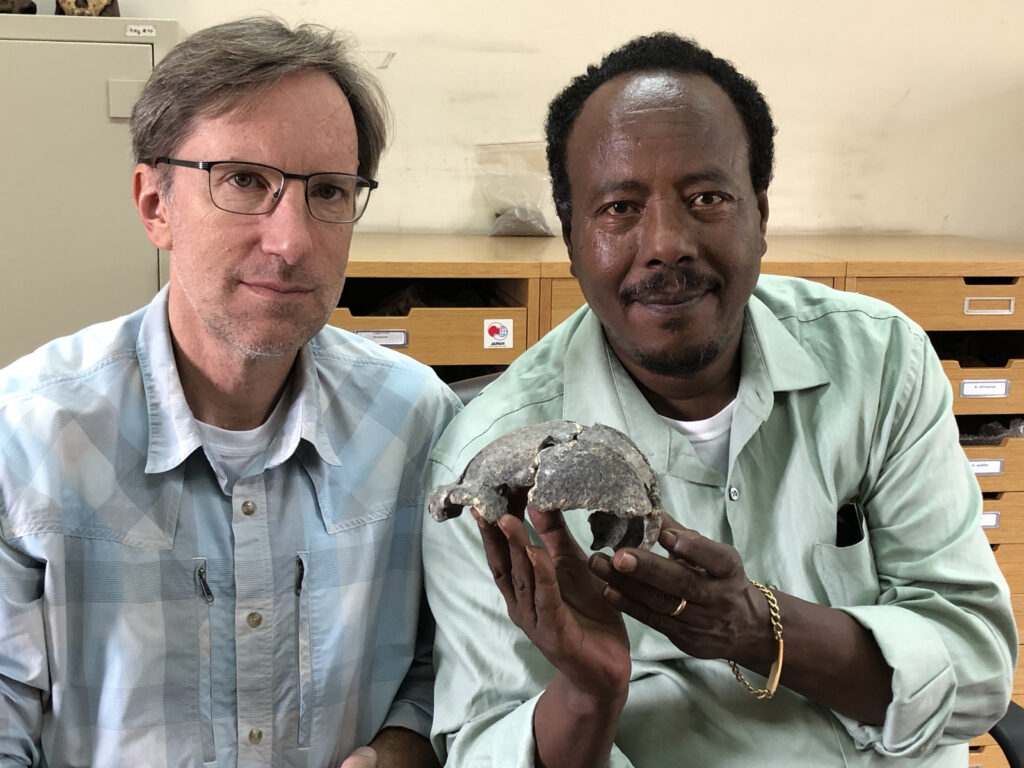 “Although most researchers in the field consider the Acheulian to have replaced the earlier Oldowan (Mode 1) by 1.7 Ma, our research has shown that Mode 1 technology actually remained ubiquitous throughout the entire Paleolithic,” Semaw said.

“The simple view that a single hominin species is responsible for a single stone tool technology is not supported,” Rogers said. “The human evolutionary story is more complicated.”

The DAN5 and BSN12 sites at Gona are among the earliest examples of H. erectus associated with both Oldowan and Acheulian stone assemblages.

“In the almost 130 years since its initial discovery in Java, H. erectus has been recovered from many sites across Eurasia and Africa. The new remains from the Gona study area exhibit a degree of biological diversity in Africa that had not been seen previously, notably the small size of the DAN5 cranium,” said study co-author Scott Simpson of Case Western Reserve University. 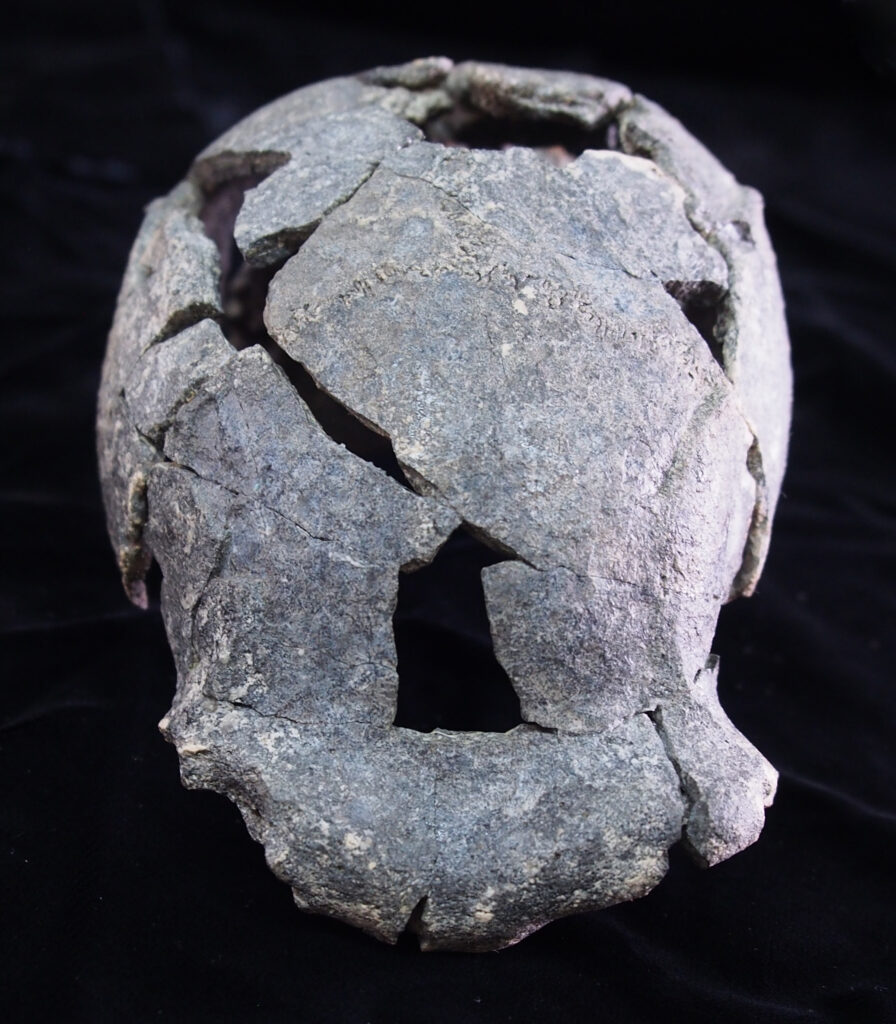 In Africa, some argue that multiple hominin species may have been responsible for the two distinct contemporary stone technologies, Oldowan and Acheulian. To the contrary, the evidence from Gona suggests a lengthy and concurrent use of both Oldowan and Acheulian technologies by a single long-lived species, H. erectus, the variable expression of which deserves continued research, according to the researchers.

“One challenge in the future will be to understand better the stone tool attributes that are likely to be passed on through cultural tradition versus others that are more likely to be reinvented by different hominin groups,” Rogers said.

This news release was provided by Southern Connecticut State University.