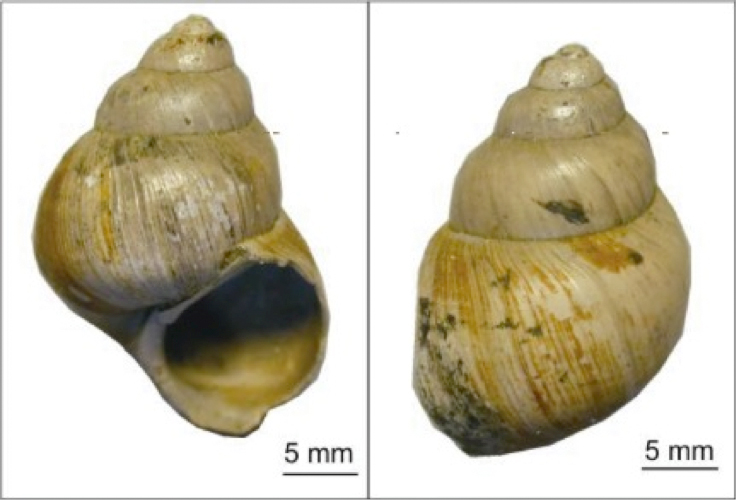 Researchers from the University of Michigan, the University of Connecticut and elsewhere analyzed fossilized shells of the freshwater snail Viviparus lentus from the Hampshire Basin, United Kingdom. They used clumped-isotope thermometry to estimate land temperatures during the Eocence-Oligocene transition, about 34 million years ago. Photo courtesy of Michael Hren.ANN ARBOR—Using a new laboratory technique to analyze fossil snail shells, scientists have gained insights into an abrupt climate shift that transformed the planet nearly 34 million years ago.

At that time, the Earth switched from a warm and high-carbon dioxide “greenhouse” state to the lower-carbon dioxide, variable climate of the modern “icehouse” world. Massive ice sheets grew across the Antarctic continent, major animal groups shifted and ocean temperatures decreased by up to 5 degrees Celsius (9 degrees Fahrenheit).

But studies of how this drastic change affected temperatures on land have had mixed results. Some show no appreciable terrestrial climate change; others find cooling of up to 8 C (14.4 F) and large changes in seasonality.

Now, a group of American and British scientists — including two from the University of Michigan — has used a new geochemical technique to analyze heavy isotopes of carbon and oxygen in fossil snail shells. They used the method to measure the change in land temperature associated with this shift in global atmospheric carbon dioxide concentrations.

Their results suggest a drop of as much as 10 C (18 F) for freshwater during the warm season and 6 C (10.8 F) for the atmosphere in the North Atlantic, giving further evidence that the concentration of atmospheric carbon dioxide and Earth’s surface temperature are inextricably linked.

The team’s findings were published online April 22 in the Proceedings of the National Academy of Sciences. The lead author of the paper is Michael Hren, assistant professor of chemistry and geosciences at the University of Connecticut. The U-M co-authors are Nathan Sheldon and Kyger Lohmann of the Department of Earth and Environmental Sciences.

“One of the key principles of geology is that the past is the key to the present: records of past climate inform us of how the Earth system functions. By understanding past climate transitions, we can better understand the present and predict impacts for the future,” said Hren, a former U-M postdoctoral researcher who worked under Sheldon.

“While our understanding of past changes in the temperature of Earth’s oceans is well established, deciphering the environmental conditions of terrestrial settings has remained elusive. With the application of new analytical techniques, it is now possible to illuminate the paired response of the ocean-land system during episodes of global climate change,” said Lohmann, the director of the Stable Isotope Laboratory, the first U-M facility to use the “clumped-isotope technique.”

The transition between the late Eocene and the Oligocene epochs (between 34 and 33.5 million years ago) was triggered in part by changes in the concentration of atmospheric carbon dioxide that enabled ice to build up on the Antarctic continent.

Ice-sheet growth, coupled with favorable changes in the Earth’s orbit, pushed the planet past a climatic tipping point and led to both the rapid buildup of a permanent ice sheet in the Antarctic and much larger changes in global climate, the authors wrote.

But much of what is known about this time period’s climate comes from cores drilled deep in the ocean. There, organic and inorganic remains of ancient marine creatures retain chemical signatures of ocean temperatures when they were alive.

Now, the U-M researchers and their colleagues have used the recently developed “clumped-isotope thermometer” technique to examine terrestrial fossil shells from this time period. The team collected fossilized snails from the Isle of Wight, Great Britain, and looked for not just the kind and number of carbon and oxygen isotopes present, but how they were bound together.

The abundance of bonds containing heavy isotopes of both oxygen and carbon are temperature-dependent, so they can give a reliable picture of the climate of terrestrial environments.

“The application of the clumped-isotope technique provides a unique record of temperature change on land where earlier estimates based on other proxies were either imprecise or ambiguous,” Lohmann said. “This illuminates the response of the terrestrial climate system during this interval of declining carbon dioxide.”

The results are significant in part because they provide further evidence that carbon dioxide is linked to climate not only by way of the vast oceans and their temperature, but by terrestrial temperatures, too, Hren said.

Studies have shown that before this drastic cooling event, Earth’s atmosphere contained 1,000 parts per million of carbon dioxide or more. By the end of the transition, it was likely lower than 600-700 ppm. Some predictions, noted Hren, suggest that Earth’s current carbon dioxide concentrations, close to 400 ppm and climbing, could increase to nearly 1,000 ppm in the next 100 years.

If that turns out to be the case, it’s likely that temperature changes on the scale of the Eocene to Oligocene could occur – but in the other direction, toward a much warmer climate that could again fundamentally alter life on Earth.

“The terrestrial setting is the habitat of humanity,” Lohmann said. “Therefore, understanding the magnitude and heterogeneity of temperature change on land is essential if we are to model and predict the future impacts on society as our climate warms.”

In addition to Hren, Sheldon and Lohmann, authors of the PNAS paper are Stephen T. Grimes and Melanie Bugler of the University of Plymouth, Margaret E. Collinson of Royal Holloway University, and Jerry J. Hooker of the Natural History Museum in London.

The work was funded by the Turner Postdoctoral Fellows program at the University of Michigan.