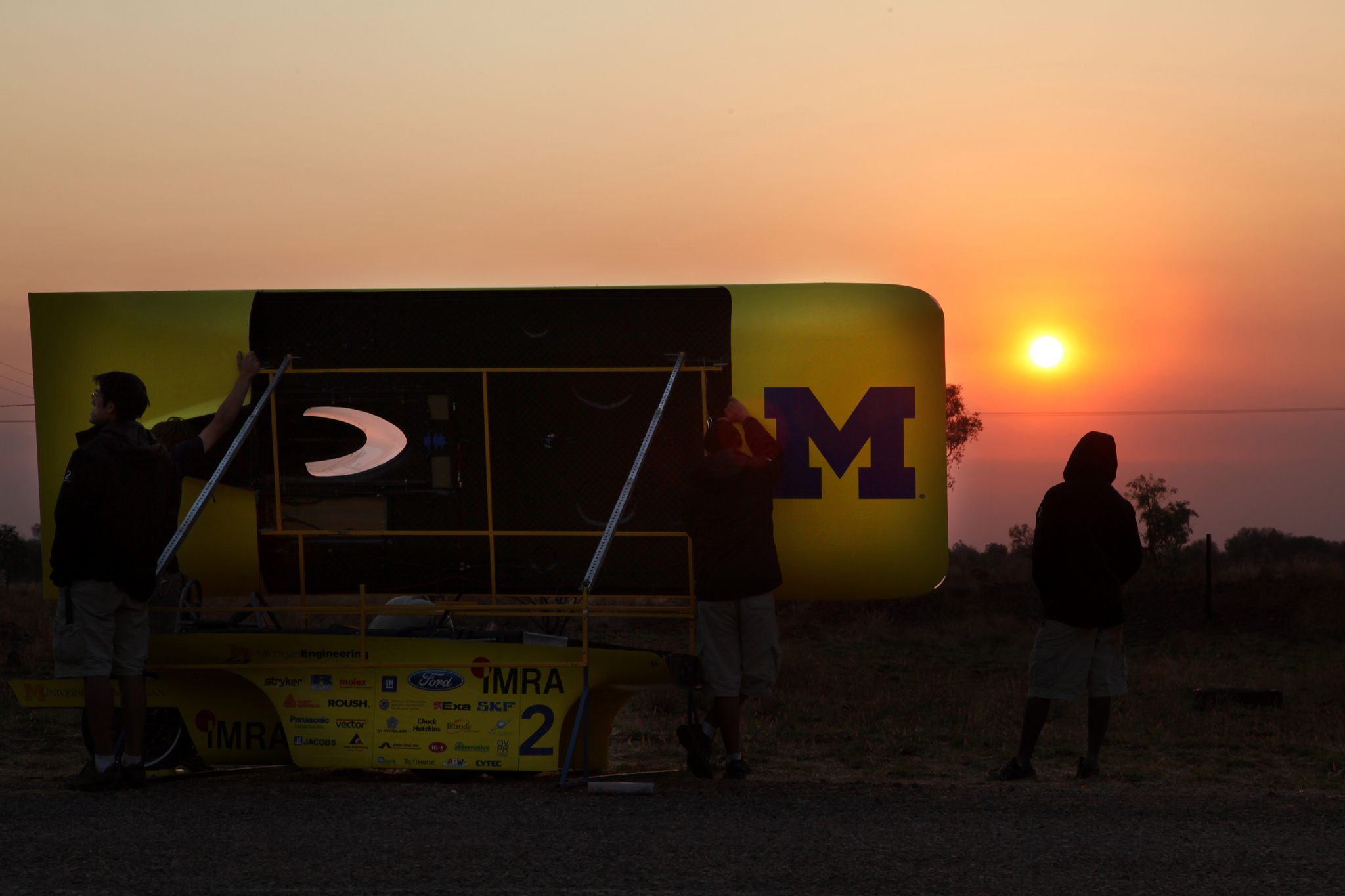 Day three of the 2011 World Solar Challenge. Image credit: Marcin Szczepanski, U-M College of EngineeringANN ARBOR—In vehicles powered by the sun, students from Abu Dhabi University and the University of Michigan will join forces in a grueling, four-day race across the United Arab Emirates.

The inaugural Abu Dhabi Solar Challenge takes place Jan. 15-19. Teams from six continents will compete for 745 miles in custom cars they designed and built themselves.

The contest coincides with the Abu Dhabi Sustainability Week, an effort to examine how renewable energies can play a part in the oil-rich region’s future. Just after the race, the teams will take part in the opening ceremonies of World Future Energy Summit, a gathering of more than 30,000 policymakers and business leaders from 170 countries.

“The Abu Dhabi Solar Challenge is a creative way of allowing the young people in UAE to discover ways to interact with renewable energy,” said Jamie Cunningham, CEO and founder of Professional Sports Group and organizer of Abu Dhabi Sustainability Week. “It also allows them to be part of the ever-growing clean energy industry in the UAE.”

The United Arab Emirates is on the southeast end of the Arabian Peninsula on the Persian Gulf. The country is a federation of seven emirates, including Abu Dhabi, which lies on a T-shaped island jutting into the gulf.

“I’m really looking forward to a fresh perspective,” said Pavan Naik, a junior at U-M studying industrial and operations engineering. “It’s definitely very easy to fall into a rut, and partnering with international students should give new eyes to the engineering puzzle at hand and provide insight on new solutions we haven’t considered yet.”

This will be the first solar car race for the Abu Dhabi students.

“I am looking forward to gaining valuable experience from the U-M Solar Car Team,” said Mohammed Ziauddin Mohammed Habeebuddin, a mechanical engineering student at Abu Dhabi University who is interested in energy conservation and efficiency. “I hope that it will be an unforgettable learning experience for me.”

“I think it will be a valuable educational experience for both organizations,” said Ferman, who received a bachelor’s degree in computer science from Michigan in 2008. “In typical solar car fashion, shared adversity has a way of forming strong bonds.”