Some Americans are cooling off on global warming 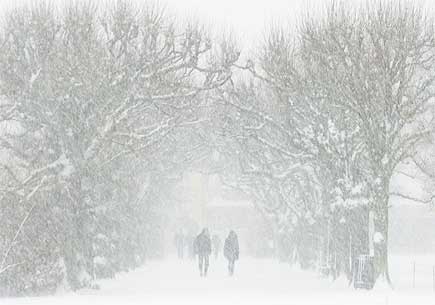 ANN ARBOR—A complaint-worthy winter has led to a drop in the number of Americans who believe that global warming is real, according to a University of Michigan survey.

The percentage of Americans surveyed who think there is solid evidence of global warming remained at a majority, or 63 percent, in the spring. That’s down from 67 percent surveyed last fall, which was the highest since 2008.

“This drop suggests that the solid rebound in acceptance of global warming among Americans observed in recent surveys has, at least temporarily, ended,” said Barry Rabe, director of the Center for Local, State and Urban Policy at U-M’s Ford School of Public Policy.

The results come from the National Surveys on Energy and Environment, a joint effort of U-M and the Muhlenberg Institute of Public Opinion at Muhlenberg College in Allentown, Pa.

“The fairly cold winter and slow arriving spring weather this year appears to have contributed to a slight decline in the number of Americans that think global warming is happening,” said Chris Borick, the survey’s co-author and director of the Muhlenberg Institute.

The telephone survey of 852 Americans between April 1 and April 14 had a margin of error of 3.5 percentage points either way.