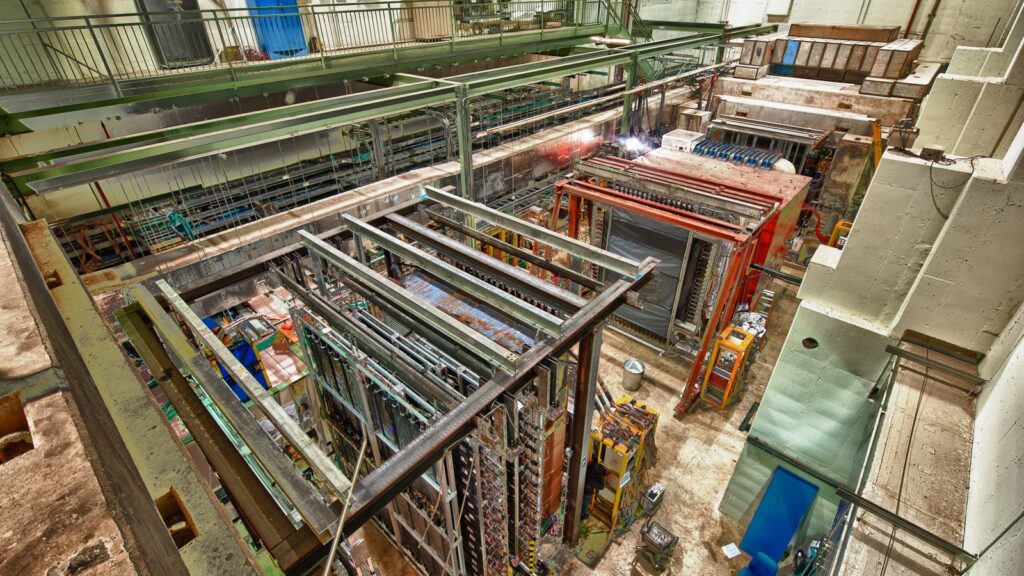 Image of the apparatus used in the experiment. The proton beams pass through each of the shown layers, with the iron wall at the end of the path in the upper right corner of the image. Image credit: Fermi National Accelerator Laboratory

Symmetry is an important underlying structure of nature, present not only in mathematics and art, but also in living organisms and galaxies.

Scientists originally thought protons, the positively charged particle at the center of every atom, displayed symmetry. But a research team that includes University of Michigan physicists has found the proton displays asymmetry in its makeup.

Understanding the properties of the proton helps physicists answer some of the most fundamental questions in all of science. By investigating the world at the smallest level, scientists are advancing technology we use every day. Studies of the proton have led to the development of proton therapy for cancer treatment, measurement of proton radiation during space travel, and even understanding of star formation and the early universe.

Rather than a tiny, impenetrable point, the atom is a collection of particles: each is composed of protons, neutrons and electrons. The proton and neutron are composed of even smaller particles with their own positive and negative charges, called up quarks and down quarks. Quarks are held together by one of the fundamental forces of physics, called the strong force. 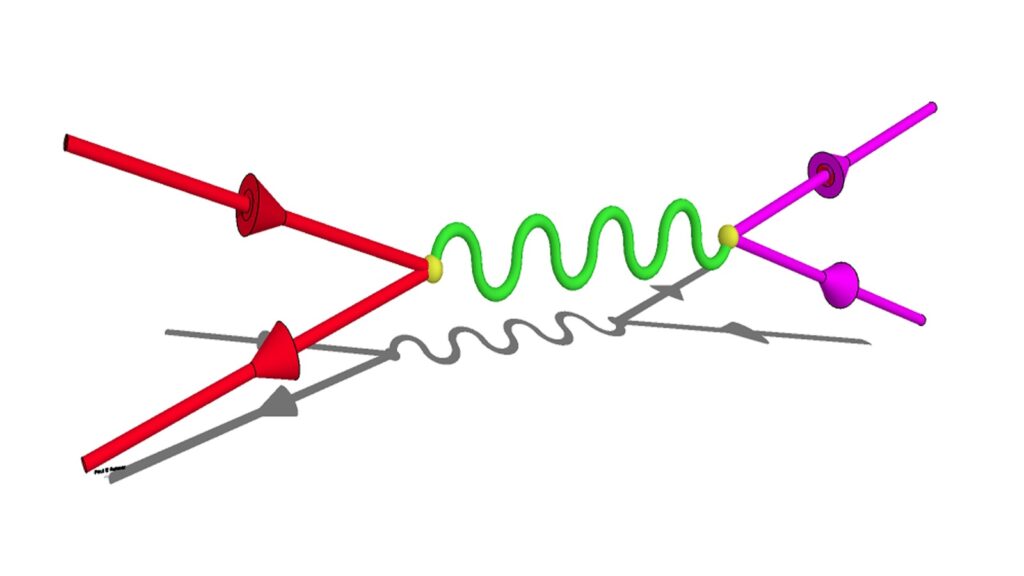 “The fact that there are more anti-down quarks in the proton than anti-up quarks continues out as far as we could measure, and that’s interesting because, according to all existing models we have of the proton, there’s no real reason that this asymmetry should be there,” said Paul Reimer, spokesperson on the study and experimental physicist at the Argonne National Laboratory.

According to previous models, the strong force shouldn’t care if it’s producing an up quark and anti-up quark pair, or a down-quark and anti-down quark pair—but it should be producing them in equal numbers, says Reimer.

“The question is, ‘Does this asymmetry exist out in this region where antiquarks are rare? And if it does, what can it tell us about how they are formed?'” Reimer said.

Two prior studies found evidence of this asymmetry, and that there are as many as 50% more anti-down quarks than anti-up quarks. The earliest study, conducted at CERN, a particle physics laboratory in Switzerland, found just a single datapoint demonstrating this asymmetry.

A study conducted at Fermilab, a particle physics laboratory and accelerator outside Chicago, confirmed the CERN study’s findings—with many more data points, says U-M physicist Christine Aidala, who has been a part of the current experiment since 2010. Now, the current study is interested in examining these quark pairs in higher momentum ranges of the proton—those marbles carrying more momentum than the others.

“The current experiment extended the kinematic range of the predecessor experiment, and we can confirm our results in the region where we have overlapping data,” Aidala said.

To examine the nature of these particles, Reimer led a second experiment at Fermilab which aimed a proton beam at targets of liquid hydrogen and liquid deuterium. Hydrogen’s nucleus is composed of a single proton, while deuterium contains a loosely bound proton and neutron.

When the proton beam hits its hydrogen or deuterium targets, quarks in the proton beam annihilate with antiquarks in the targets and throw off products called muons. This interaction is called the Drell-Yan process, said University of Michigan physicist Wolfgang Lorenzon, who has been involved in the project since 2008 and built the experiment’s targets.

Because protons and neutrons are mirrors of each other—the proton has two up quarks and one down quark and the neutron has two down quarks and one up quark—the researchers can compare the annihilation products from each of them, said Aidala.

“Because of the difference in the quarks between the protons and the neutrons, we can get a handle on the types of antimatter quarks that are being annihilated in these two different targets,” Aidala said. 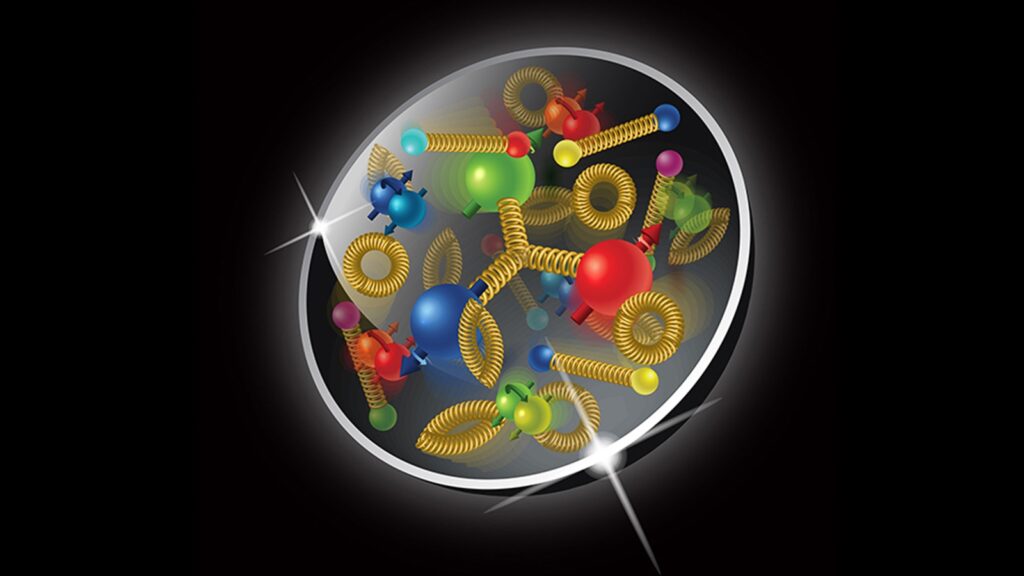 The experiment was challenging because the researchers were focused on colliding as many protons in the proton beam as possible with nucleons in the hydrogen and deuterium targets. So the researchers liquified the hydrogen and deuterium to increase the densities and therefore the rates at which the beam protons and the target nucleons interact. At these densities, the targets have the same explosive power as several kilograms of TNT, and need to be handled very carefully, said Lorenzon.

“The events we were looking at appear to occur only about 1 in 10 million events,” Lorenzon said. “These events are much harder to find than a needle in a haystack.”

Overall, the physicists recorded 40,000 events in two years of experimentation. When these protons crash together and the quarks and anti-quarks within them annihilate into virtual photons, those virtual photons throw off products called muons. Specifically, the researchers were looking for muon pairs. These muons are similar to heavy electrons: they carry a charge, and when they pass through a cloud of particles outside the beam, those particles become ionized. The researchers collected these ionized particles and were able to determine the asymmetry between the anti-up and anti-down quarks.

Clues about the nature of quarks in the proton ultimately lead to better understanding of the atomic nucleus. Understanding the nucleus can demystify properties of the atom and how different chemical elements react with each other. Proton research touches upon fields including chemistry, astronomy, cosmology and biology, leading to advances in medicine, materials science and more.

“We’re trying to understand the structure of the proton,” said Lorenzon. “We’ve been studying the proton for more than 100 years and it’s still a puzzle.”

The work was performed by the SeaQuest Collaboration, which is supported in part by the U.S. Department of Energy’s Office of Nuclear Physics and the National Science Foundation.