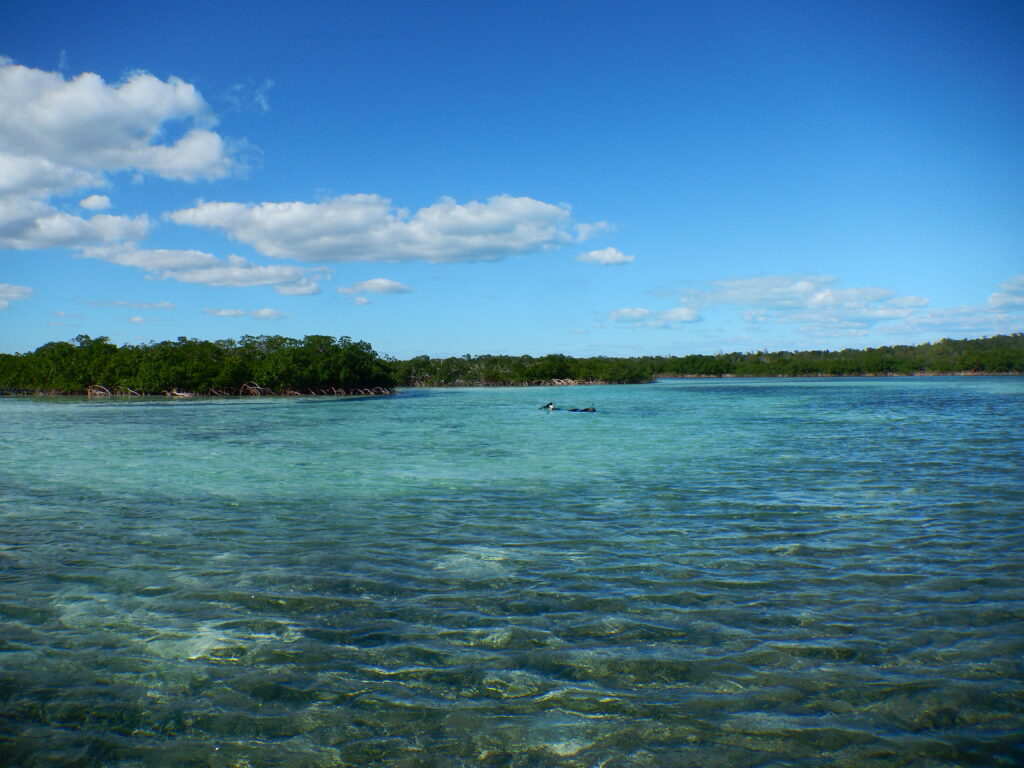 The mangrove-lined estuary on Abaco Island in the Bahamas where University of Michigan marine ecologist Jacob Allgeier and his colleagues used radio-tracked tropical fish to study the importance of highly active individuals in maintaining ecosystem health. Image credit Craig Layman

The study found that the individual gray and cubera snappers that spent the most time swimming and foraging for food also spread the highest levels of the essential nutrient nitrogen throughout the estuary in their urine.

The excretory contributions of the most active individuals nearly doubled the total amount of nitrogen that would otherwise be present in the ecosystem. That extra fertilizer means more plant growth and more food at the base of the food web.

“In any population, the behavior of key individuals can have outsized impacts on their ecosystem—think Steve Jobs,” said U-M marine ecologist Jacob Allgeier, assistant professor in the Department of Ecology and Evolutionary Biology. “Quantifying the behavior of key individuals in wild populations is an emerging frontier in ecology, with the potential to upend how we define biodiversity and our attempts to conserve it.”

Allgeier is the lead author of a paper scheduled for publication Feb. 26 in the journal Science Advances. The paper reports the findings of a study that radio-tracked 33 gray snappers and 25 cuberas in a mangrove-lined estuary on Abaco Island in the Bahamas in 2006 and 2007. 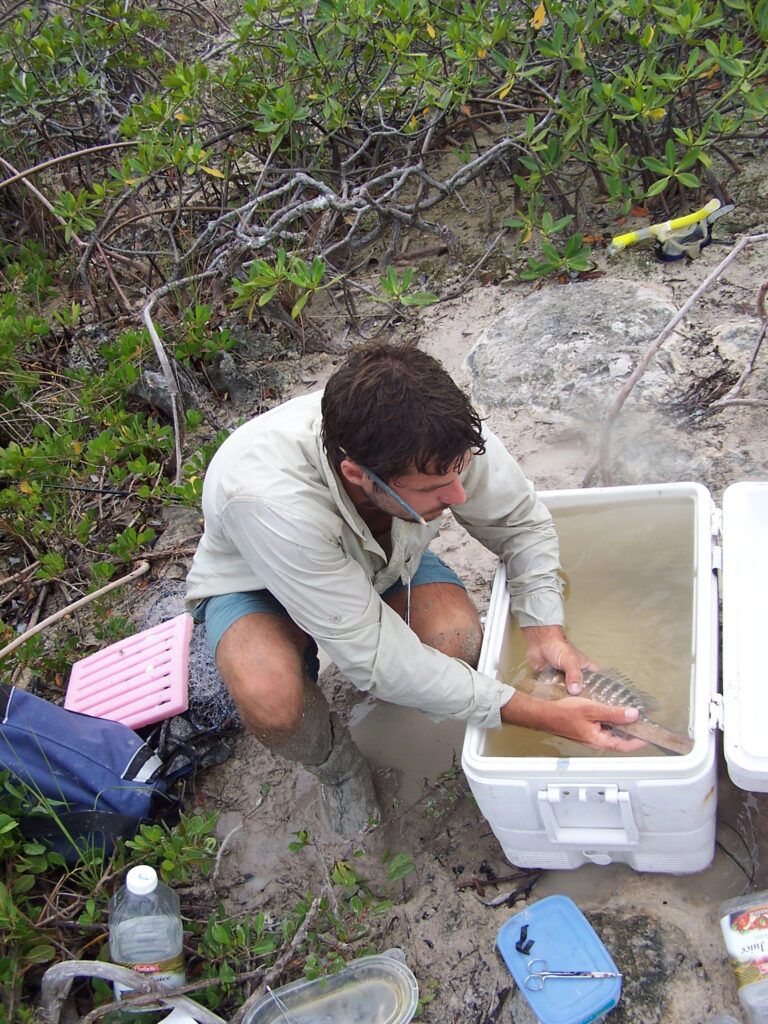 University of Michigan marine ecologist Jacob Allgeier measures one of the gray snappers used to study the importance of highly active individuals in maintaining ecosystem health. The study was conducted on Abaco Island in the Bahamas. Image credit John Quatrocchi

In October 2019, Allgeier was awarded an $875,000, five-year grant from the Packard Foundation. Much of that funding will be used for a larger study to radio-track about 500 Abaco Island fish to learn more about their feeding behavior.

The big-picture goal of that research is to understand how an unlikely but renewable source of fertilizer—fish excretion—can be used to stimulate fish production and improve food security for people living in tropical ecosystems.

In Science Advances, Allgeier and his colleagues report that while the most active snappers had an outsized impact on ecosystem health, they were also the most likely to be caught by anglers, who prize their bold behavior and fight.

Gray and cubera snapper support important commercial and subsistence fisheries throughout the Caribbean and are traditionally harvested by spearfishing and angling with hook and line. Spearfishing typically targets fish with large body size, while angling tends to select for bolder or more active individuals.

Allgeier and his colleagues used computer models to simulate the harvest of various types of individuals and found that the selective removal of the most active snappers reduced the nitrogen supply in the ecosystem by up to 69%.

“Our results challenge the species-centric definition of biodiversity and provide evidence that the role of individuals may need to be further reconciled in how we approach conservation and the maintenance of ecosystem function,” Allgeier and his co-authors wrote.

For the study, transmitters were surgically implanted into fish body cavities, and nine receivers were scattered throughout the study site. The researchers used acoustic telemetry data and mathematical models to estimate the amount of nitrogen individual fish supplied and the extent to which they spread the nutrient across the ecosystem. 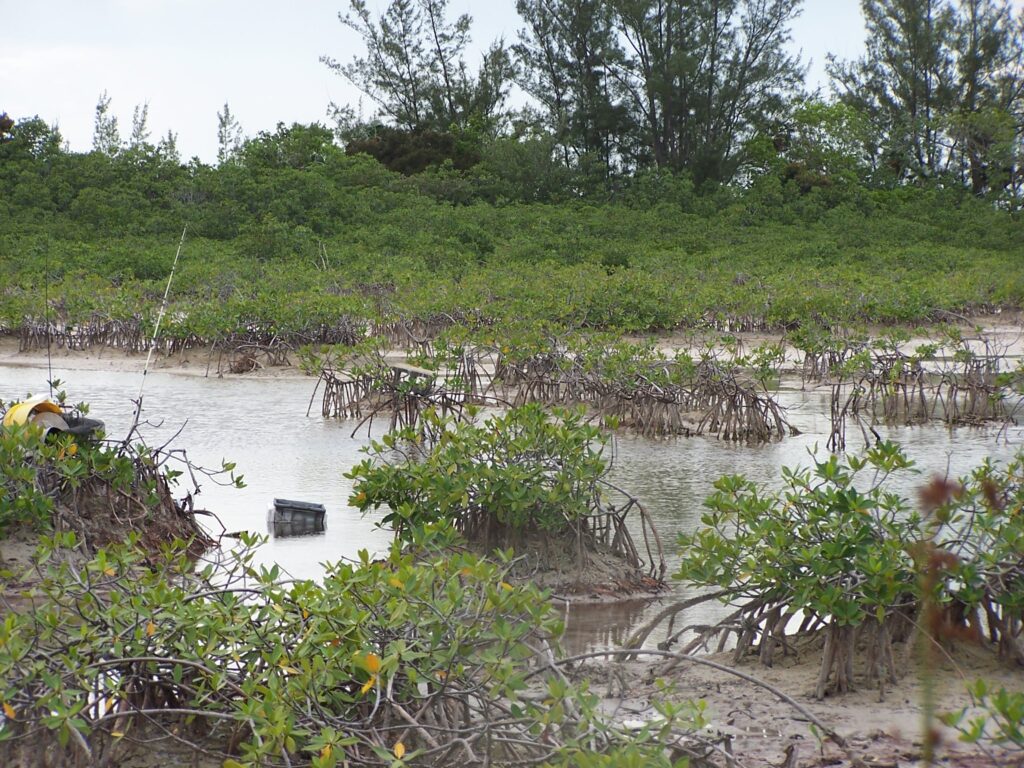 The same mangrove-lined estuary at low tide. The U-M-led study found that the individual gray and cubera snappers that spent the most time swimming and foraging for food also spread the highest levels of the essential nutrient nitrogen throughout the estuary in their urine. Image credit: Jacob Allgeier.

They found that the amount of nitrogen supplied by the two snapper populations—excreted through their gills as ammonium—was roughly equivalent to all other nitrogen sources combined. And the most active fish contributed the most nitrogen.

In the study of infectious diseases, individuals who demonstrate a high ability to infect others—think Typhoid Mary—are called super-spreaders. Before this concept emerged, it had long been assumed that all infected individuals had equal chances of transmitting an infection to others.

Allgeier refers to the piscatory overachievers in the Bahamian mangrove estuaries as “disproportionate fertilizers.” For simplicity’s sake, you can think of them as super-urinators.

Over the past decade, Allgeier and his colleagues have glued together thousands of cinder blocks to create 38 artificial reefs in a shallow bay on Abaco Island in the northern Bahamas, where the research is conducted.

The other authors of the Science Advances paper are Timothy Cline of the U-M Department of Ecology and Evolutionary Biology, Timothy Walsworth of Utah State University, Gus Wathen of Eco Logical Research Inc., Craig Layman of North Carolina State University and Daniel Schindler of the University of Washington.

Funding for the study was provided by the National Science Foundation.