Teaching love of science from the ground up 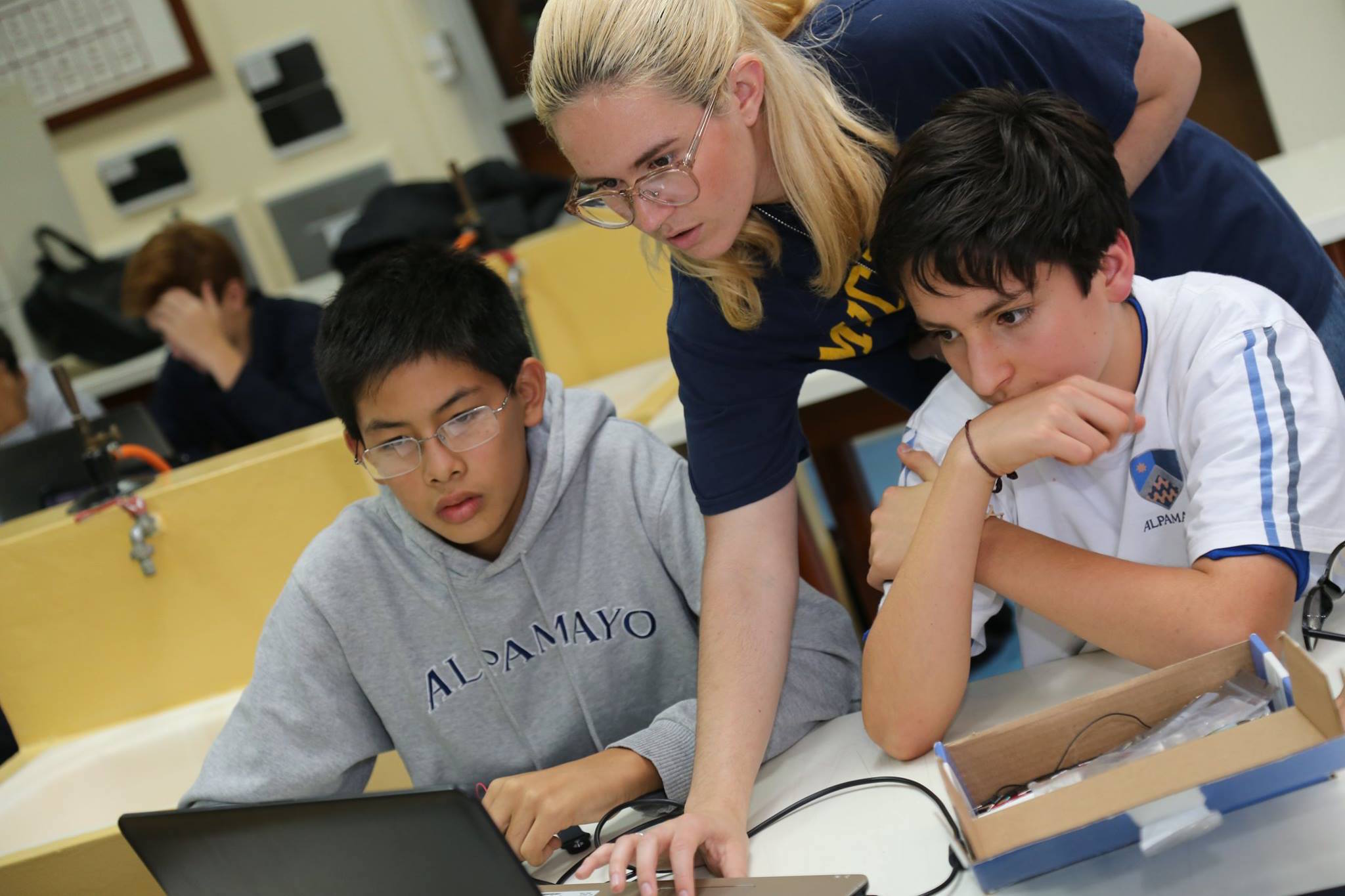 University of Michigan student Isabella DeShantz working with high school students from Alpamayo school to do a python programming project.ANN ARBOR—In a high school classroom in Lima, Peru, a group of students are programming a 3-D printer they will soon use to print out Yoda from Star Wars, Game of Thrones logos and models of several buildings.

Later on, the students—who until then have not had previous programming experience—will be learning to code with Python, programing electronics and building drones before they move on to building tech projects with social impact: a prosthetic hand, an automated irrigation system, a water contamination detector.

It’s all part of United Technologies for Kids, an NGO startup that University of Michigan sophomore Giuliana Huerta Mercado created to promote science and technology education in developing countries.

Huerta Mercado said while she’s always been interested in science, there were few opportunities in her high school in Peru to have hands-on experience. It was while visiting her engineering friends at their labs that she had the idea for the program. 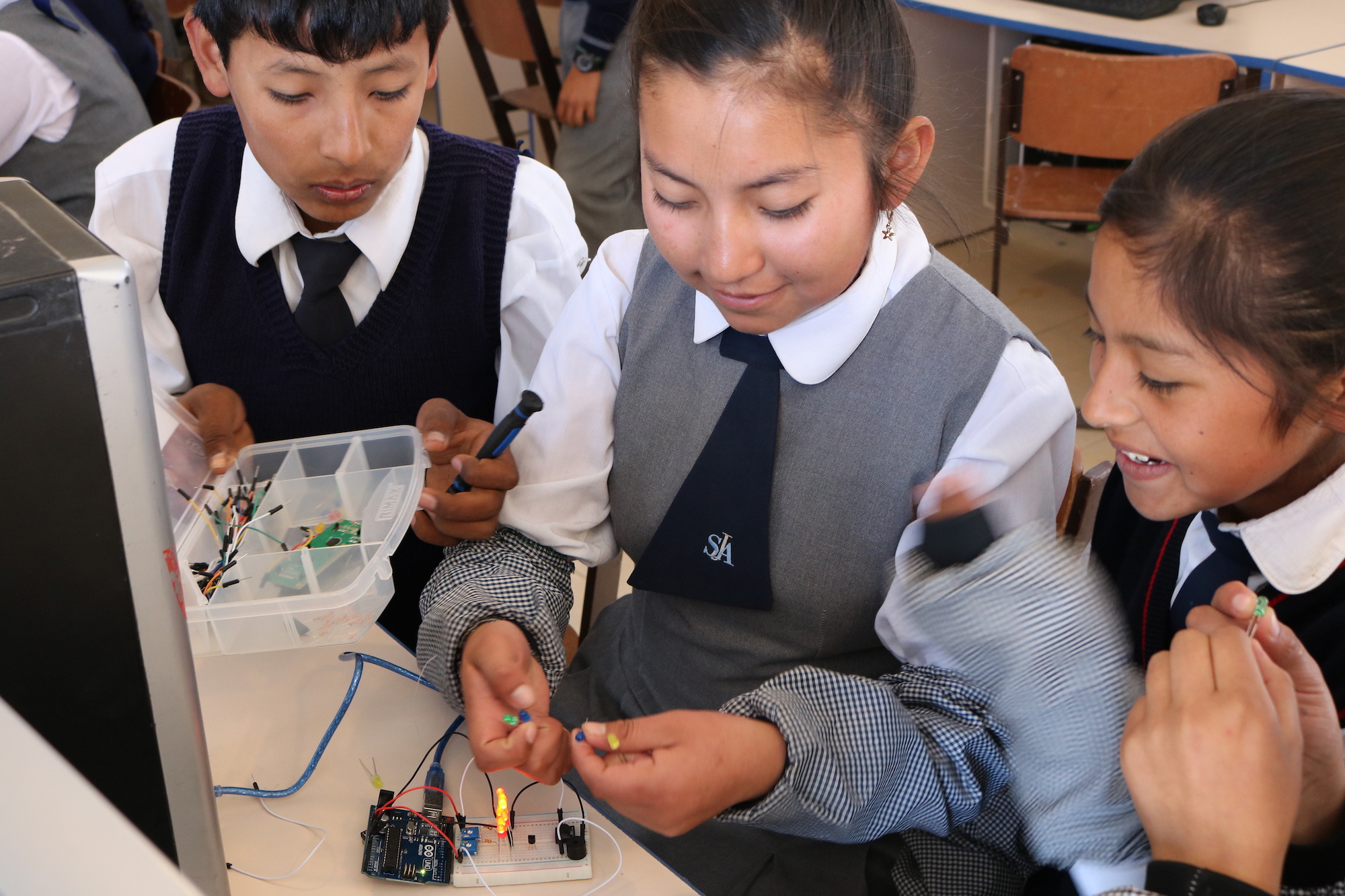 Students in San Juan Apostol school in Arequipa, Peru, are excited because their LED circuit on Arduino worked.During the summer, college students work for one month with high schoolers, teaching courses on cutting-edge technologies such as 3-D printing and design, electronics, programming, drones and biotechnology. Back in the U.S., they continue to work with them remotely to help them prepare for a November STEM fair. The best projects are presented in February at UC-Berkeley, where high schoolers get to participate in workshops, tour Silicon Valley and visit area colleges.

“We are like a hub, a platform of transfer of knowledge from U.S. universities to high schools in Peru and Latin America. We want to inspire students in as many fields as we can,” she said, adding that students are encouraged to get involved and try to solve real problems in their communities.

“I really see STEM education to be the key drive for the development in my country,” Huerta Mercado said. “We want to introduce technology to students so they can solve social problems in their communities.”

And UTK wants to expand the program as much as possible. Last year, they started with one private school that could help offset some of the equipment and travel expenses, benefiting 25 students. This year, they expanded to networks with low and high income schools and 200 students from eight high schools in Lima, three outside the city and one in Medellín, Colombia, participated in the program.

They hope to add South East Asia next.

No experience needed
Lawrence Teng is a fourth-year math student at U-M who plans to teach at a secondary school. He said his interest in science, math and teaching started early on, and he’s involved in several programs promoting STEM education, including the STEM Society at U-M where he now serves as co-president. 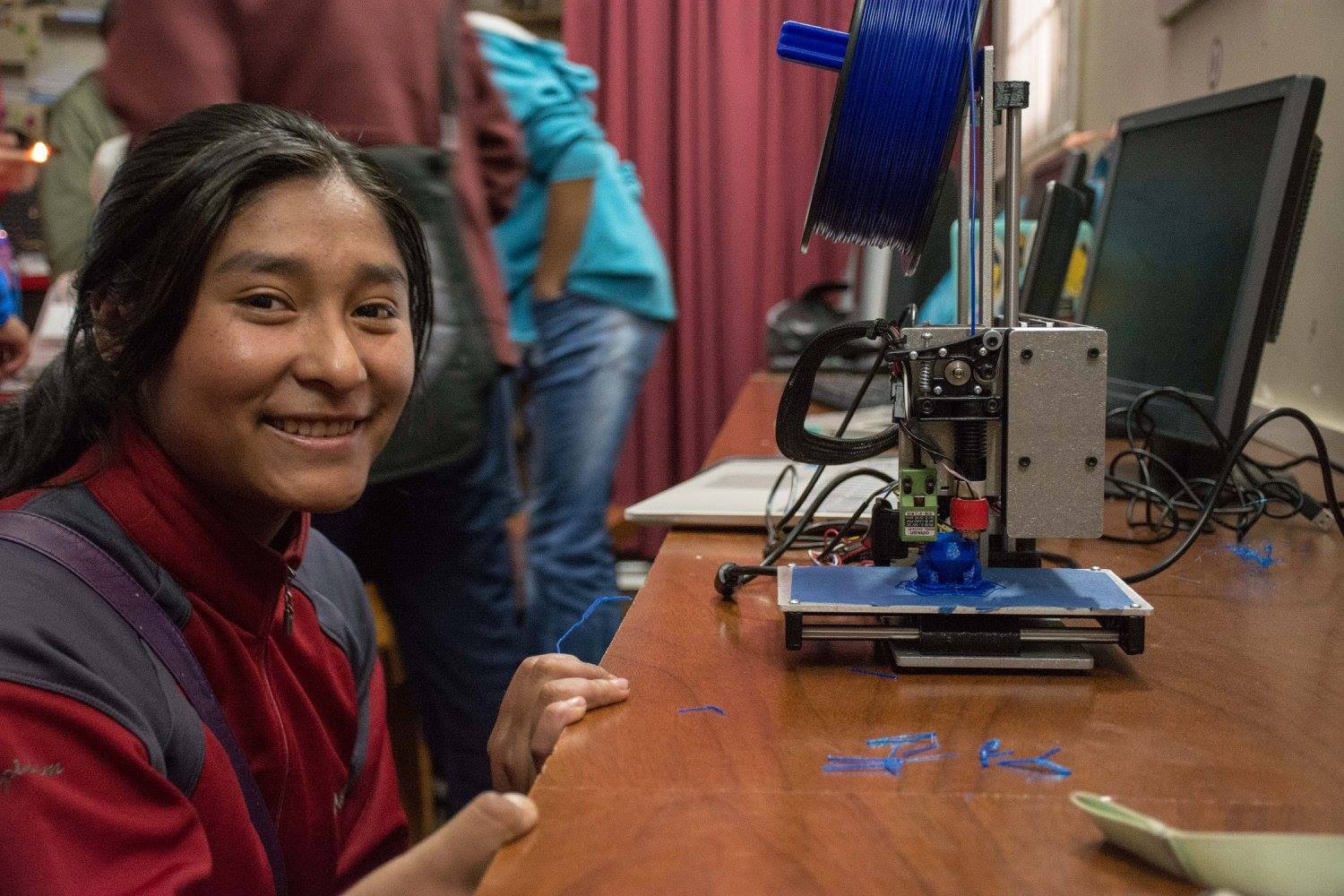 A senior student from San Francisco de Asis high school in Puno, Peru, uses a 3D to print a prototype she designed using Fusion 360 software.Through UTK, Lawrence traveled to Medellín this summer to work with students at Colegio Sagrado Corazón. The program, he said, is designed to allow students with different skill levels to participate and get excited about science. It was also a great experience for him as an educator, he said.

“It ended up being very collaborative, working a lot with the teachers and adapting to the students and what their experience and prior knowledge were,” Teng said. “We started from scratch and they could adapt to their own interests and skills.”

“The program is designed for not just coming up with a project in mind, tailored so they would learn skills, but to add excitement about this, so they can continue in the future if they want.”

And just like Huerta Mercado expected, the program is already changing the career path of some of the participants, with 26 percent of them changing their major preference to a STEM-related field after participating in the program.

“I decided I want to study electrical engineering because in UTK’s STEM Lab Program I got involved in a lot of projects with Arduinos and I think that there is a potential to make a change in the world,” said Lara Bellatin, a junior at Villa Caritas School in Lima. “I’ve seen projects like an electrical stabilizing spoon made for people with Parkinson’s that will help them eat, and I think those kinds of projects will help make a difference in people’s lives.”

“My life changed 360 degrees after UTK’s STEM Lab Program in my school because it opened doors, inspired and also empowered me to solve my problems by my own,” said Rafaela Valencia, also a junior at Villa Caritas School. “Also, it made me realize that I want to study product design because I want to be able to create something that is useful and helpful for society.”

Learn more about the project: https://m.facebook.com/UTKPERU