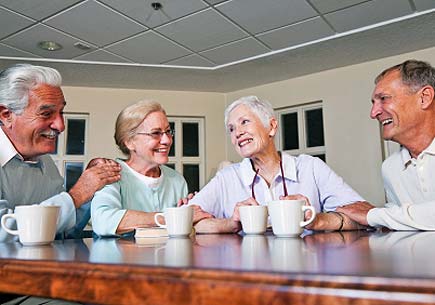 ANN ARBOR—Researchers from the University of Michigan Institute for Social Research are conducting an innovative field experiment designed to improve the lives of older, lower-income people.

The study is funded with an $886,000 grant from the MacArthur Foundation.

“We’re adapting a program called Masterpiece Living for use in affordable housing communities,” said U-M psychologist Toni Antonucci, the principal investigator of the project. “Two communities in the Los Angeles area will serve as our intervention groups, and another nearby retirement community will be our comparison group.”

The two-year study will examine how the program’s suite of services affects residents’ quality of life, physical mobility, medical and behavioral risk factors, productive activity, and use of medical services.

The Masterpiece Living program is based on principles identified in the book “Successful Aging,” co-authored by ISR researcher Robert Kahn and geriatrician John Rowe.

“Bob Kahn and Jack Rowe really pioneered the idea of successful aging,” Antonucci said. “Instead of focusing on the losses that come with aging, they identified the factors that allowed men and women to stay active and continue enjoying their lives as they aged.”

The Masterpiece Living program involves improving the quality of food in community dining rooms, providing nutritional information to residents, improving fitness areas, and regularly assessing residents’ gait, balance, and arm strength, among other factors. Participants also provide feedback on how they’re doing, and meet with trained staff to discuss what they are doing to stay active, and what improvements they can make. The pilot of this program showed considerable success.

“Over a three-year period, participants ranging in age from the late 60s to the 90s showed a pattern of stability and small gains. That might seem modest, but in old age, maintenance is an accomplishment,” said Kahn who is also professor emeritus of public health and psychology. “National data on individuals in that age range show, on average, a marked decline in function in a comparable three-year period.”

So now Antonucci and Kahn are adapting the Masterpiece Living program for use in affordable housing communities, trimming the costs of implementing the program without reducing its effectiveness.

“Our goal is to develop a blueprint that can be widely used to improve the quality of life for all seniors, of every income level,” Antonucci said. “We hope the results of this field experiment will also result in Medicare and Medicaid savings and contribute to efforts to reform current models of service provision to older Americans.”