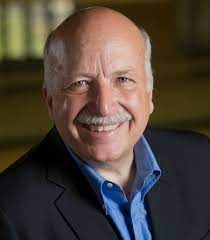 University of Michigan historian Scott Ellsworth, author of two books about the 1921 Tulsa Race Massacre, says that President Joe Biden’s historic visit this week to Greenwood, the site where hundreds of African Americans were killed by a white mob a century ago, “was deeply moving, extremely significant.”

“I thought about the three known living survivors, but I also thought about other members of the community, and the idea that the President of the United States, the leader of the free world, was coming to visit them to commemorate this tragic event,” Ellsworth said. “I also thought of the survivors that are long gone and how much this would have pleased them very much. They had all suffered, their families had suffered during the massacre, but they were also deeply patriotic citizens. I think that really would have meant the world to them.”

Born and raised in Tulsa, Ellsworth is a lecturer in the U-M Department of Afroamerican and African Studies. His books include: “Death in a Promised Land: The Tulsa Race Riot of 1921” and “The Ground Breaking: An American City and Its Search for Justice.”

What are your thoughts on President Biden’s speech in Tulsa?

President Biden gave a terrific speech. It was very moving, and I was deeply impressed by the content of his words.

One of the most important parts of the speech was when he said, “We can’t just choose to learn what we want to know and not what we should know. We should know the good, the bad, everything. That’s what great nations do. They come to terms with their dark sides. And we’re a great nation. The only way to build a common ground is to truly repair and to rebuild.” I thought that’s exactly what we have to do as a country.

During his speech, Biden also mentioned that this story “was in the mirror dimly, but no longer.” Why did it take so long for this story to be told?

For 50 years, the massacre was actively covered up, official records were stolen and destroyed, articles were scissored out of newspapers. Tulsa’s daily newspapers went out of their way not to talk about it for a half century. Even as late as the 1970s, researchers were threatened with their lives and their livelihoods for trying to do this.

Another reason is Oklahoma is a state that’s in the middle of the country, one that does not have a huge African American presence. American news reporting tends to focus on the larger urban areas, so it’s a part of the country that’s been ignored to some degree. It’s taken us a long time to get the story out.

Let’s go back a century and talk about your personal connection with the city. You were born and raised in Tulsa. When and how did you first realize what happened in 1921?

My own family only goes back to the 1930s in Tulsa, so nobody was living there at the time. But as a kid growing up, even as a 10- or 11-year-old, I would occasionally hear grown-ups talking about what we call the race riot. When you would enter the room, they would change the subject or lower their voices. I heard the stories of bodies floating down the Arkansas River, of machine guns and all the airplanes, but it was really hard to find out anything. But the summer that I turned 12 years old, in 1966, everything changed.

I was in the new downtown public library with two of my friends and we saw something we had never seen before—a microfilm machine. We were determined to use it, and started fiddling around with the knobs. A librarian came marching over, but rather than shooing us away, she taught us how to use the machine. Nearby were cabinets with rolls of microfilm in them from old issues of Tulsa newspapers. I knew that June 1921 was when this riot, if it existed, happened. The first roll that we fed into the machine was an issue of the Tulsa World and we were simply flabbergasted at all the headlines about the riot. I knew at that point that my hometown had a skeleton in its closet, that something had indeed happened.

How is Tulsa nowadays? 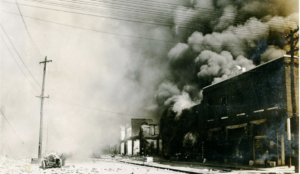 Tulsa, like all American cities, is segregated. African Americans make up something like less than 10% of the population. There is a distinct Black district, Greenwood. Race relations have continued to be rocky, at times, in Tulsa. There was the murder of Terence Crutcher by a white Tulsa police officer a couple of years back and other equally troubling incidents.

There’s a great disparity between social factors in the African American community on the north side and the white community on the south side. Black citizens in Tulsa have an 11-year-shorter lifespan on average than white citizens. There are much higher rates of poverty, unemployment, infant mortality. There are very real issues that are still there. Some of them, though not all of them, are traceable to the massacre, which created this great economic hole that Black Tulsans have never fully gotten out of. But there are middle-class African Americans in Greenwood today, too.

As the 100th anniversary discussions wind down in the next few weeks is it important to keep the conversation going? What is next?

Absolutely! It’s very much important to keep going. We’ve finally gotten the story out. People have heard of the massacre now. It is a very important story that needs to be taught. It should be remembered. Because this isn’t simply a story of a tragedy, as awful and horrible as it was. The story of Greenwood is also a story of courage, of perseverance and of sticking to it. The reality is that Greenwood’s citizens rebuilt their community after the massacre. The old-timers used to tell me that in the 1940s, Greenwood was even greater than it had been in the 1920s. There are stories of human striving and accomplishment that I think can be inspirational as well. 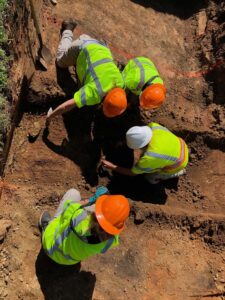 Another important piece of work that’s going to continue is our search for the mass graves. I started that search 23 years ago in 1998, and soon got a lot of first-rate help. We interviewed over 300 Tulsans, and we discovered funeral home records and other evidence that nobody had looked at for 75 years. And this past October, we discovered a mass grave in Oaklawn Cemetery in Tulsa, including 12 coffins laid out side-by-side in an area where no one was supposed to have been buried.

We have a team of forensic scientists, osteologists and archaeologists, who will be able to determine whether these are massacre victims or not. It’s important to remember that the bodies of these people were thrown away and buried by the white authorities while their loved ones were all being held under armed guard. Their families never found out what happened to these people or where they were buried. The plan is to rebury them with honor, hopefully in Greenwood, then to create an appropriate memorial. If that’s done, it will become a shrine, not just to victims of the Tulsa Race Massacre, but also to victims of racist violence over the centuries in the United States whose remains lie in graves that no one will ever find.

Do you believe the country is heading in the right direction on the fight against racism?

I think that, overall, we’re going in the right direction—though that may not always be obvious. And the problems that we face are very large and very real. Nobody can wave a magic wand and make all these problems go away overnight. It’s going to take long-term commitment and long-term dedication. In the United States, we’ve only had truly two significant periods of positive change in terms of race: one with the defeat of slavery during the Civil War, the other with the defeat of legalized segregation during the Civil Rights Movement.

During his speech in Tulsa, Biden talked about this younger generation of Americans that is growing up in a fundamentally different world on race and issues than the one I grew up in. I’m optimistic, and I have hope for the future, but it’s going to take a lot of hard work.