Turning pathogens against each other to prevent drug resistance 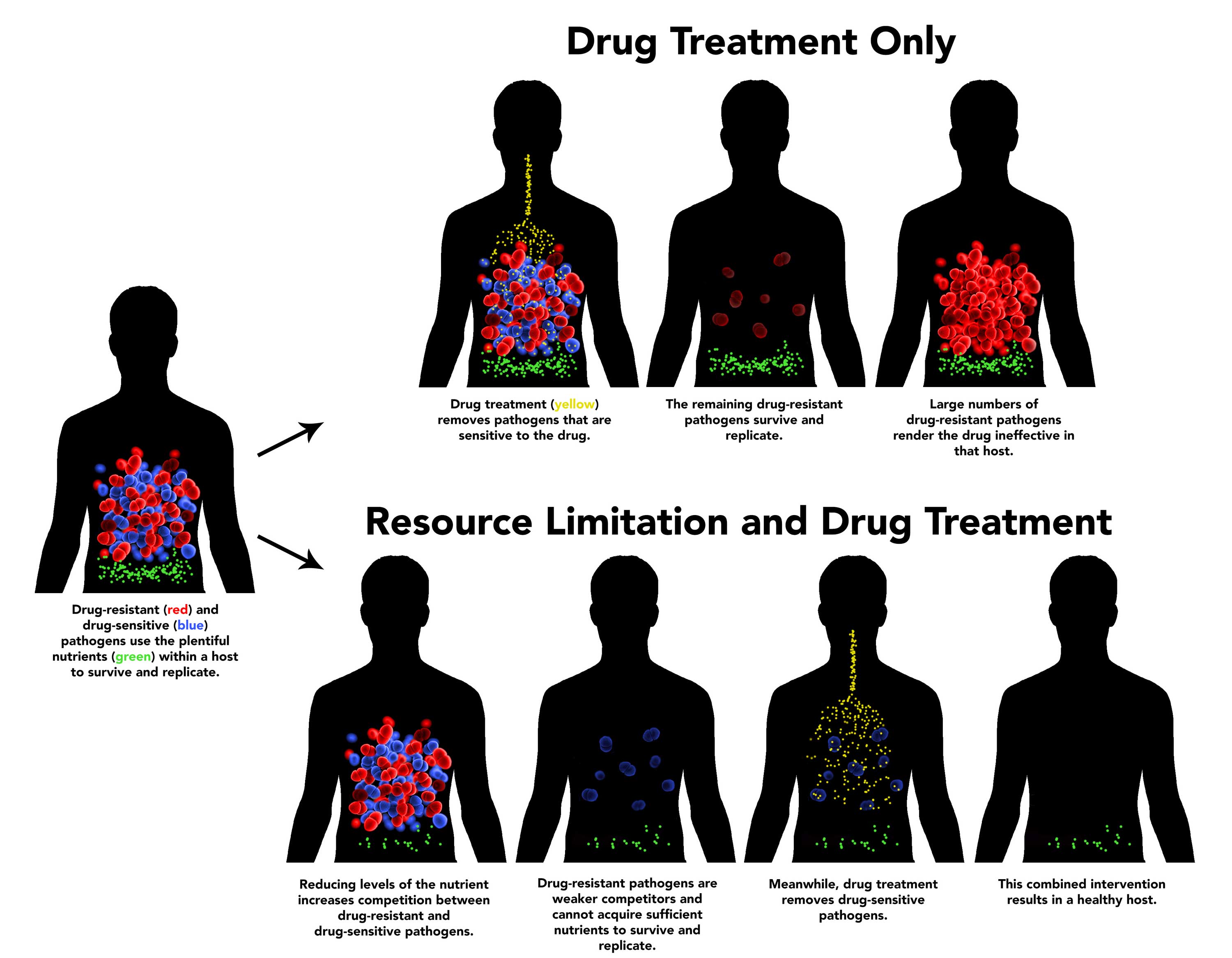 ANN ARBOR—Limiting a much-needed resource could pit pathogens against one another and prevent the emergence of drug resistance. New research demonstrates that harnessing competition among pathogens inside a patient could extend the life of existing drugs where resistance is already present and prevent resistance to new drugs from emerging.

A study describing this ecological approach to drug resistance appears the week of Dec. 11 in Proceedings of the National Academy of Sciences.

“We are faced with a big problem: What can we do when a patient is infected with a drug-resistant pathogen, which will cause treatment to fail? We could use other drugs, but other drugs may not be available, and developing new ones is a lengthy and expensive process.

“By taking advantage of competition between parasites inside a host, we managed to use an existing drug to successfully treat an infection, even when drug-resistant parasites were already there,” said Wale, who works in the U-M Department of Ecology and Evolutionary Biology, in the laboratory of Meghan Duffy.

Drug resistance originates when a pathogen—such as a parasite, virus or bacterium—develops a genetic mutation that allows it to avoid being killed by the drug.

Even if only one individual pathogen has this mutation, as is frequently the case when resistance first arises, that one individual can replicate into a population of billions once it survives drug treatment. But resistance often comes with a cost, and drug-resistant pathogens often do not acquire certain resources as efficiently as other pathogens, or they may require more of the resource.

“In the absence of drug treatment, the only thing that stops resistant pathogens from spreading is competition with the pathogens that are sensitive to drug treatment,” said Andrew Read, the Evan Pugh Professor of Biology and Entomology and Eberly Professor of Biotechnology at Penn State and senior author of the study. “We’re utilizing the natural force of competition to control the resistant ones and using conventional drugs to treat the sensitive ones.”

The researchers manipulated a nutrient in the drinking water of mice that is used by malaria parasites during an infection—just as a gardener might manipulate nutrients through fertilizers to favor certain plants. This dietary intervention was used alongside traditional drugs as a sort of combination therapy.

“We treated mice infected with drug-sensitive malaria parasites with traditional drugs,” Wale said. “When mice were given the nutrient, the treatment failed in 40 percent of the mice, and we confirmed by a variety of tests that this was because drug-resistant strains had popped up. But when the nutrient was limited, the infection did not rebound in a single mouse. So by limiting this nutrient, we prevented the emergence of drug resistance.”

The researchers then confirmed that their results were due to competition among parasites and not some other effect of limiting the nutrient. When drug-treated mice were infected only with resistant strains and the nutrient was limited, the resistant parasites survived.

“This study is a proof-of-principle that an ecological manipulation can make it possible to continue using a drug even when resistant pathogens that would otherwise cause a treatment failure are present at great numbers,” Read said. “People have already been looking for weak points of resistant pathogens, but they do it in the absence of susceptible ones.

“Our work shows that studies that do not involve this competition aspect are missing the natural force that keeps resistance under control, and that is missing a huge amount of potential for manipulation.”

This work suggests a new direction of study that would allow researchers to capitalize on the natural competition between pathogens to control the emergence of drug resistance. For infections like tuberculosis and malaria, where drug-resistant strains to traditional drugs already exist, researchers must next identify a resource or nutrient for which drug-resistant strains have greater needs than sensitive strains, confirm that limiting the resource would lead to the elimination of resistant strains, determine the most effective intervention strategy to remove the resource, and pinpoint the ideal timing of the intervention. For an infection where a new drug is being developed, these questions could be addressed during the drug development phase.

“Researchers already go to great lengths to identify drug resistance as a routine part of drug development,” Read said. “You could work the development of a resource-limiting intervention into that drug development pipeline. The initial cost would increase, but after that relatively small initial investment, you might be able to extend the lifetime of a drug. It costs a hundred million dollars or more to bring a new drug to market, so the payoff could be quite big.

In addition to Wale and Read, the research team includes Derek Sim, Matthew Jones, and Rahel Salathe of Penn State and Troy Day of Queen’s University. The work was funded by the Institute of General Medical Science.