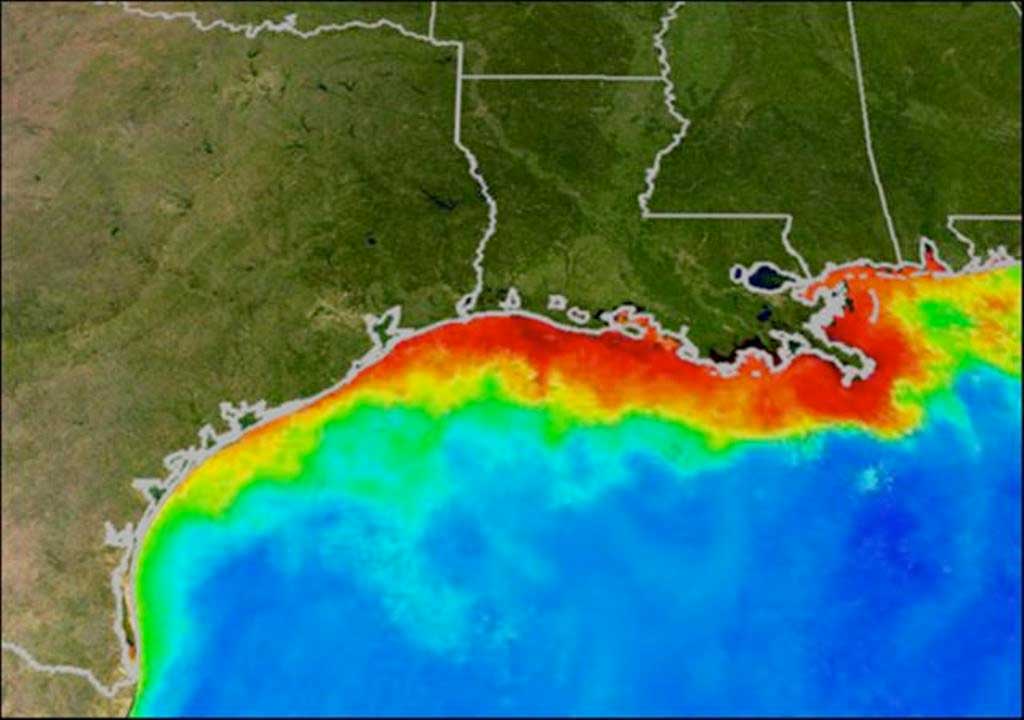 An oxygen-starved hypoxic zone, commonly called a dead zone and shown in red, forms each summer in the Gulf of Mexico. Fish and shellfish either leave the oxygen-depleted waters or die, resulting in losses to commercial and sports fisheries. Credit: NOAAANN ARBOR—A University of Michigan researcher and his colleagues are forecasting an average but still large “dead zone” in the Gulf of Mexico this year and a slightly above-average oxygen-starved region in the Chesapeake Bay.

The two forecasts were announced today by the National Oceanic and Atmospheric Administration, which sponsors the work. The Gulf forecast calls for an oxygen-depleted, or hypoxic, region of 4,633 to 5,708 square miles, which is roughly the size of Connecticut.

While close to averages since the late 1990s, the predicted hypoxic zones are many times larger than what research has shown them to be prior to the significant human influences that greatly expanded their sizes and impacts.

“These annual forecasts serve two purposes. The first is to remind federal and state policymakers that insufficient progress is being made to reduce the size of these low-oxygen regions,” said U-M aquatic ecologist Don Scavia, director of the Graham Sustainability Institute, who contributes to both the Gulf and Chesapeake Bay forecasts.

“The second is to demonstrate through more than a decade of reasonably accurate annual forecasts that these models form a solid basis for setting nutrient load reduction targets.”

The Gulf of Mexico prediction is based on models developed by NOAA-sponsored modeling teams and individual researchers at U-M, Louisiana State University, Louisiana Universities Marine Consortium, Virginia Institute of Marine Sciences/College of William and Mary, Texas A&M University and the U.S. Geological Survey. The forecast relies on nutrient loading estimates from the USGS.

The models also account for the influence of variable weather and oceanographic conditions and predict that these can affect the dead zone area by as much as 38 percent.

The Chesapeake Bay prediction is based on models developed by NOAA-sponsored researchers at the University of Michigan and the University of Maryland Center for Environmental Science and relies on nutrient loading estimates from USGS.

The Gulf dead zone affects nationally important commercial and recreational fisheries and threatens the region’s economy. The Chesapeake Bay dead zones, which have been highly variable in recent years, threaten a multiyear effort to restore the water and habitat quality to enhance its production of crabs, oysters and other important fisheries.

Hypoxic and anoxic zones are caused by excessive nutrient pollution, primarily from human activities such as agriculture and wastewater, which results in insufficient oxygen to support most marine life and habitats in near-bottom waters—a dead zone. Aspects of weather, including wind speed, wind direction, precipitation and temperature also impact the size of dead zones.

“We are making progress at reducing pollution in our nation’s oceans, coasts and inland waters that lead to ‘dead zones,’ but there is more work to be done,” said Kathryn Sullivan, undersecretary of commerce for oceans and atmosphere and NOAA administrator.

“These ecological forecasts are good examples of the critical environmental intelligence products and tools that NOAA is providing to interagency management bodies such as the Chesapeake Bay Program and Gulf Hypoxia Task Force. With this information, we can work collectively on ways to reduce pollution and protect our marine environments for future generations.”

Later this year, researchers will measure oxygen levels in both bodies of water. The confirmed size of the 2014 Gulf hypoxic zone will be released in late July or early August, following a mid-July monitoring survey led by the Louisiana Universities Marine Consortium. The final measurement in the Chesapeake will come in October following surveys by the Chesapeake Bay Program’s partners from the Maryland Department of Natural Resources and the Virginia Department of Environmental Quality.

USGS nutrient-loading estimates for the Mississippi River and Chesapeake Bay are used in the hypoxia forecasts. The Chesapeake data are funded by a cooperative agreement between USGS and the Maryland Department of Natural Resources. USGS also operates more than 65 real-time nitrate sensors in these two watersheds to track how nutrient conditions are changing over time.

“The USGS continues to conduct long-term nutrient monitoring and modeling,” said William Werkheiser, USGS associate director for water. “This effort is key to tracking how nutrient conditions are changing in response to floods and droughts and nutrient management actions.”