ANN ARBOR—Andrew McCarthy didn’t know how to sew five weeks ago. But that didn’t stop the University of Michigan graduate student in architecture from stitching up his own tent for a thesis project.

Now, McCarthy is planning to put the tent to the ultimate test. He’s going to sleep in it as he climbs Aconcagua–the highest mountain in the Western Hemisphere.

His tent project won’t just be about getting a good grade. It will be about survival. Violent winds could rip the shelter to shreds in the middle of the night if it’s not made right. Climbers die on the mountain every year.

But McCarthy is confident about his creation: “I think it has a good shot. It’s a strong tent.”

He flew to South America on Sunday and planned to spend a couple days trekking to the mountain in western Argentina. If the expedition goes as planned, McCarthy said he will reach the top of Aconcagua – which means “Stone Sentinel” – on one of the last three days of February.

The second-year graduate student from Grand Rapids, Mich., said he has long been interested in nomadic dwellings and architecture for extreme environments.

“I wanted to make a tent specifically from the dimensions of my body, something I can design, build and live in,” he said.

One of the most remarkable things about McCarthy’s tent is how quickly he was able to design and construct it. The project began in January, during the first week of the semester, when he told one of his advisers, Prof. Shaun Jackson, that he wanted to build a tent for extreme climates.

Jackson said, “He set up such an incredibly tight timeline that I didn’t think that it would be possible for him to complete the tent before his scheduled departure date.

“But he worked nonstop, stayed up night after night. He has done a brilliant job managing his time,” said Jackson, who has his own design firm with a client list that includes L.L. Bean, Patagonia and Eddie Bauer.

McCarthy documented his project on his blog, http://abletoinhabit.com, and he hopes to provide updates during his expedition if it’s possible.

His tight schedule didn’t allow his enough time to invent a new type of tent or introduce new materials. Just building a tent for the first time was a huge challenge. The geometry is complex and the rip-stop nylon material must have the right amount of uniform tension as it stretches around the poles that make up the frame.

“The vents and the doors were really difficult,” he said. “It took me a couple days to figure out how to do it.”

If the panels and other pieces aren’t precisely cut, the tent just drapes over the poles like a loose bag. When the freezing, howling winds on the mountain kick up, the tent will just flap itself into oblivion. 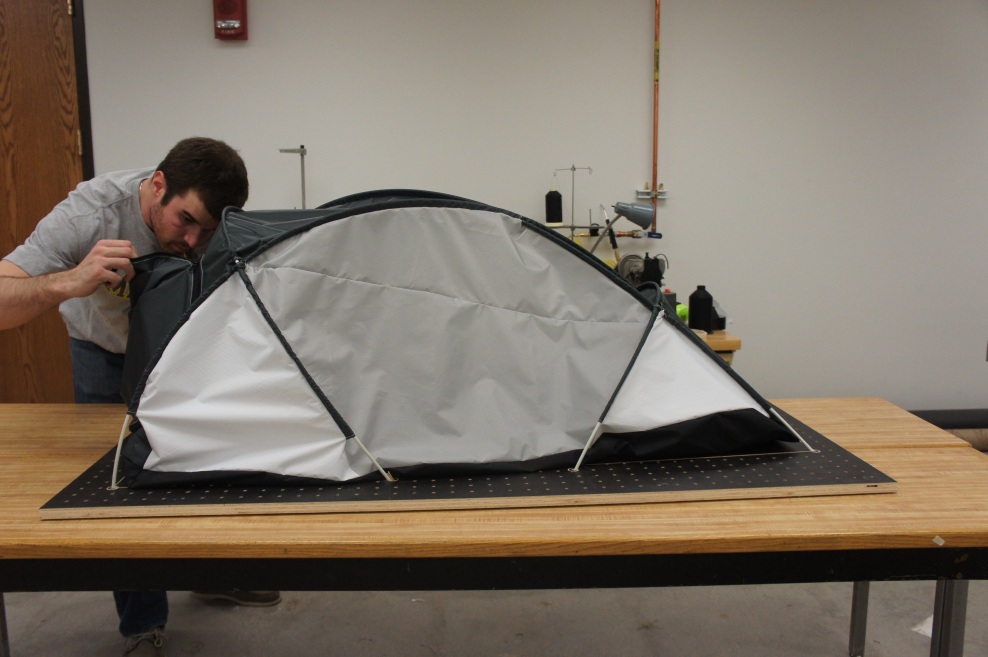 Andrew McCarthy puts the finishing touches on a half-scale model of a tent he designed for his climbing expedition. Image credit: Andrew McCarthyMcCarthy tested a half-scale model tent in a wind tunnel, and the structure was able to withstand winds of 60 mph to 80 mph before small tears started to form. The tent completely broke down when the wind was cranked up to 122 mph.

If winds rip apart the tent on Aconcagua, McCarthy hopes to be able to take refuge in another shelter with his expedition, which will include nine other climbers and two guides.

McCarthy has summited Mt. Kilimanjaro in Africa as well as mountains in the Andes and glaciers in Iceland.

Although he had to put in long hours in his studio constructing his tent, he always found time for a rigorous fitness regime.

“I started training last October,” he said. “Then it became more intense in December.”

He would lace up his boots and strap on his 60-pound pack for grueling sessions on a StairMaster machine. He also cycled, ran uphill on a treadmill and did core-strengthening exercises.

Now he hopes his tent will be as strong as his body.