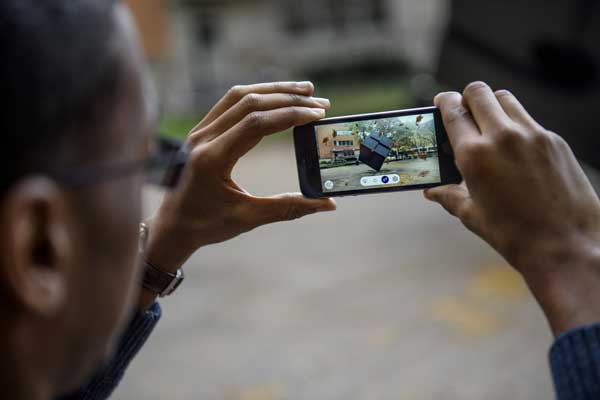 Look out! Two woolly mammoth skeletons stalk out of the Ruthven Natural History Museum door on the University of Michigan Campus.

Make it snow or rain on U-M’s iconic art sculpture, the Cube.

Go back in time as film footage features U-M students gazing at President John F. Kennedy on Oct. 14, 1960 as he announces the creation of the Peace Corp.

These are among the features of a new app created to celebrate the University of Michigan’s 200th year.

Throughout 2017, U-M has celebrated its Bicentennial in many ways. One particularly novel tribute is MGoView.

Recently launched, this multifaceted app employs augmented reality, virtual reality, historic, grainy film and other features as it offers a virtual tour—or augments a physical tour—of 30 sites on the U-M campus. Those who explore in person can use the phone’s camera to look around at the locations and find icons. If viewing offsite, photos can be swiped to view the sites, surroundings and special features.

MGoView was developed over 15 months at the School of Information and more than 3,000 have downloaded the free app. It’s available to anyone at umsi.info/mgoview and can be downloaded as an app on iPhone and Android phones.

The app is educational, and along with the augmented and virtual reality, there are digital badges people can collect.