Growing up in Maryland, Julie Hui remembers that when she wanted an internship experience, she hopped on the computer and “cold emailed” the people who could make it happen. And it worked.

Although she knew her approach was unlike her peers, it wasn’t until later as a graduate student that she understood the challenge: Writing to professional contacts can be intimidating, especially the first time. 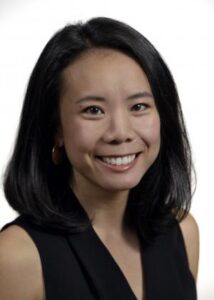 “People get nervous about communicating professionally, so they put it off or send messages quickly just to get it done,” said Hui, assistant professor and presidential postdoc at the University of Michigan School of Information. “So what they send—when they send something—would often lack context or clarity.”

To help students with their writing challenges, Hui, then a doctoral student in engineering at Northwestern University, created a prototype on paper and later a web-based tool. Some iterations later after being used in programs at Northwestern and U-M, the tool now called Lettersmith has more recently been in the hands of the team at the U-M Center for Academic Innovation, where it has been scaled for other uses in academia and perhaps beyond, Hui said.

“Collaborating with Julie on Lettersmith gives us the opportunity to increase our impact in humanities and language-related courses,” said Ben Hayward, director of software development and user experience at the Center for Academic Innovation.

“When we connect with a faculty member that has prototyped a promising and innovative technology solution, we can collaborate with them to turn it into a piece of enterprise-ready software. Doing that involves a lot of research, design, behavioral science and development work focused on improving user experience, increasing efficacy of the initial tool and expanding it to new contexts.”

Whether looking for an internship or a first or a last job, people eventually have to introduce themselves to other professionals. Social media sites like LinkedIn make such connections easy, but Hui says even with more 690 million members on LinkedIn, people often don’t know how to approach other professionals beyond the simple electronic task of asking for a connection.

Lettersmith doesn’t provide a formulaic approach like many cover letter-building sites but provides a variety of examples and tips that capture the different ways people could approach writing cold emails, cover letters or follow-up emails, Hui said. Unlike other writing tools, like Grammarly, Lettersmith provides guidance on the overall structure and content in specific communication contexts.

Its research-based approach suggests topics to include: clarity of who is requesting help; why the help seeker is reaching out; what is being asked; and indications that help show the request is personalized. Each of these items could be changed depending on the community or context in which people are writing.

The approach is based on research Hui and colleagues at Northwestern conducted of the original tool. In one part of the study, they interviewed help seekers and help providers. They learned that having samples of good writing was not enough. Help seekers needed modeling but also required coaching and reflection.

It’s not just students that could benefit from the tool. Even seasoned workers find themselves having a form of writer’s block when it comes to writing to potential employers.

It could be helpful for essays, college apps—anything that isn’t that simple to write
Julie Hui

“It could be helpful for essays, college apps—anything that isn’t that simple to write,” said Hui, who researches the theory and practice of human-centered design informed by research in human-computer interaction, crowdsourcing, social computing and learning sciences.

Computer programming isn’t in her background.

“I taught myself Javascript, HTML and Firebase just so I could build it out. And I had help from friends,” she said.

That’s why she is grateful a colleague told her about the Academic Innovation Fund. Faculty who have an idea for a tool or already have one that could be used more robustly or beyond their classes can apply to have the Center for Academic Innovation take it to the next level.

“We see tremendous possibilities in the future for Lettersmith,” Hayward said. “There’s an opportunity to do natural language processing research where we analyze how the tool affects users’ writing. We also think Lettersmith could eventually guide users in writing longer-form content that’s less formulaic. It could provide users with analysis of the tone, style and grammar in their writing, among other elements.”