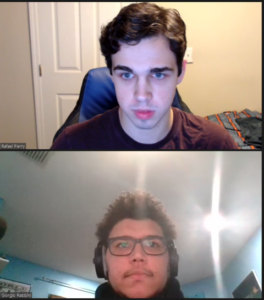 In the tournament’s final round, College of Literature, Science, and the Arts students Giorgio Rabbini and Rafael Pierry defeated Dartmouth College on a 4-1 decision. Their victory, which ended with a 13-0 overall record, occurred a year after they placed second in the same tournament. In 2019-20, they ranked eighth among debate teams nationwide.

“I’m extremely proud of Giorgio and Rafael’s undefeated debate performance, especially since they came so close to winning last year,” said Aaron Kall, U-M director of debate. “It’s a great way for the team to conclude an excellent fall semester and provides us with a tremendous amount of momentum heading into 2021.”

The Shirley Classic is widely considered the national championship of the fall semester. U-M won the tournament in 2015 and 1996.

Rabbini and Pierry captured two third-place finishes at online debates hosted by Northwestern University and Gonzaga University. Rabbini, a sophomore from Parkland, Florida, is majoring in political science and Afroamerican and African Studies. Pierry, who is from Monta Vista, California, is a political science major.

The U-M Debate Team, which began in 1903 and is one of the oldest debate programs in the United States, also won second place at online debate tournaments hosted this semester by the University of Mary Washington and Wayne State University.