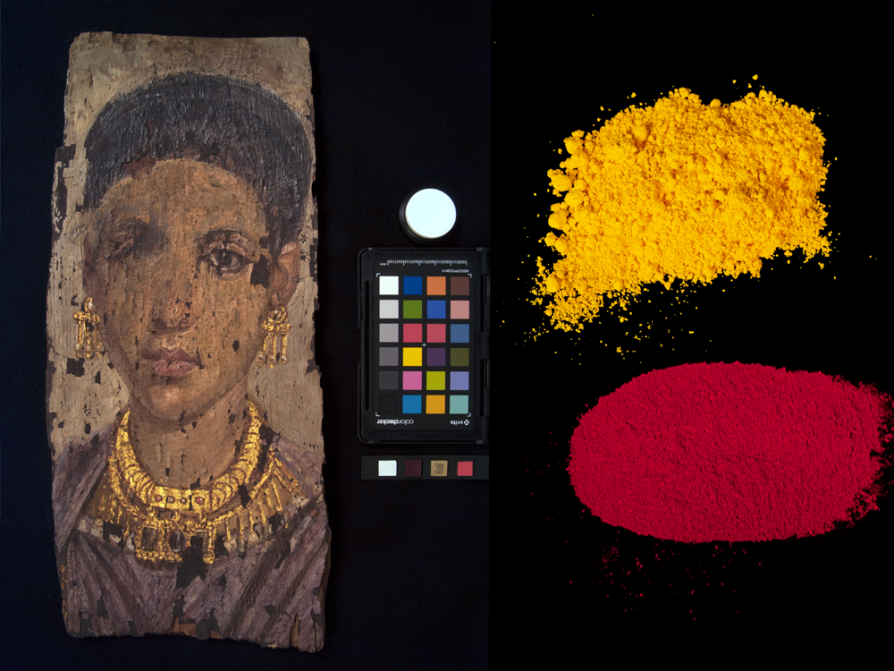 This portrait of a mummified woman was painted at nearly life size on a wood panel. Additional wrapping would have secured the panel to the mummy’s head, with the portrait facing the mummy’s body. Photo of the portrait and color reference by Carrie Roberts. Pigment photos by Randal Stegmeyer.

ANN ARBOR—In Roman times, marble sculptures were not complete until they were nearly kitschy with colors in complex patterns on their clothing and true-to-life shadows in the folds of their bright robes.

A statue’s eyes seemed to actually look through the pupils and lashes painted on them. Splashes of flashy color also emblazoned the era’s architecture, along with everyday objects.

Color as a feature of ancient sculpture has gotten lost in the intervening years, but a new exhibition at the University of Michigan Kelsey Museum of Archaeology intends to reveal what we’ve been missing.

Opening Feb. 8, “Ancient Color” debunks the common misconception that marble sculptures were intentionally all white by applying modern tools to uncover ancient Roman pigments, showing how colorful the ancient world could be. 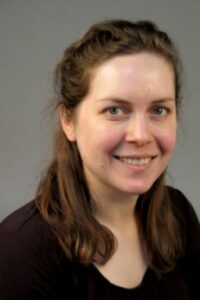 Conservator Carrie Roberts, who co-curated the exhibition with Kelsey Museum colleague Cathy Person, says the idea for the exhibition can be linked back to a smudge that she noticed on the carved hair of a marble bust of the Roman god Bacchus, an object in the museum’s collection.

“At first, I thought it might be a stain,” Roberts said. “When things like this are in the ground with metal, metal corrodes and iron corrodes red. You often get red staining from that kind of environment.”

But looking at the bust more closely with a digital microscope, Roberts saw clear evidence that the red layer was paint that had been intentionally applied. The exhibition includes the bust alongside a digital reproduction of its likely original painted form. 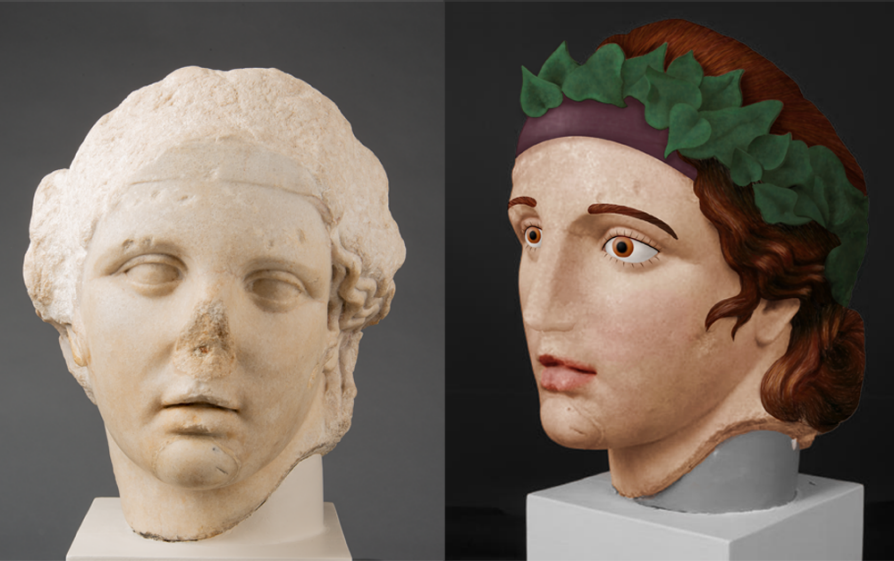 Artists gave gods in sculptures and paintings red or gold hair to signal their divine status, like Bacchus (pictured) as the sculptural remnant that Kelsey Museum visitors can see today (left; photo by Randal Stegmeyer) and with his probable original colors during the Roman period (right; digital reconstruction by Emily Pierattini). Another giveaway that Bacchus appears in a painting: He’s wearing only one sandal. In Roman art, a missing sandal works as a visual cue to show that a person is intoxicated.

According to Roberts, the red pigment probably came from the ochre commonly found in dirt across Europe. She also noticed a brighter trace of red in the corner of his mouth, which was made from the toxic material cinnabar and contains mercury.

A sample of toxic cinnabar, along with other raw materials that formed common dyes used in ancient art and life, are also are on view as part of the exhibition.

Roberts says, however, that imagining bleached statues in their original colorful state isn’t straightforward. What evidence we have of their color literally is spotty, incomplete. All but the tiniest remnants of color have been lost or even deliberately washed away by early archaeologists.

“It’s hard to describe how exciting it’s been to find the colors we found on the Bacchus head,” Roberts said. “Not just because of the discovery, but because it contributes to our understanding of an object that we’ve had since 1974.

“Some people say, ‘What good is it to hold onto all this old stuff? They’ve been excavated, interpreted and published already.’ But that was the best and biggest surprise moment for me—the moment I saw luminescence on that object.”