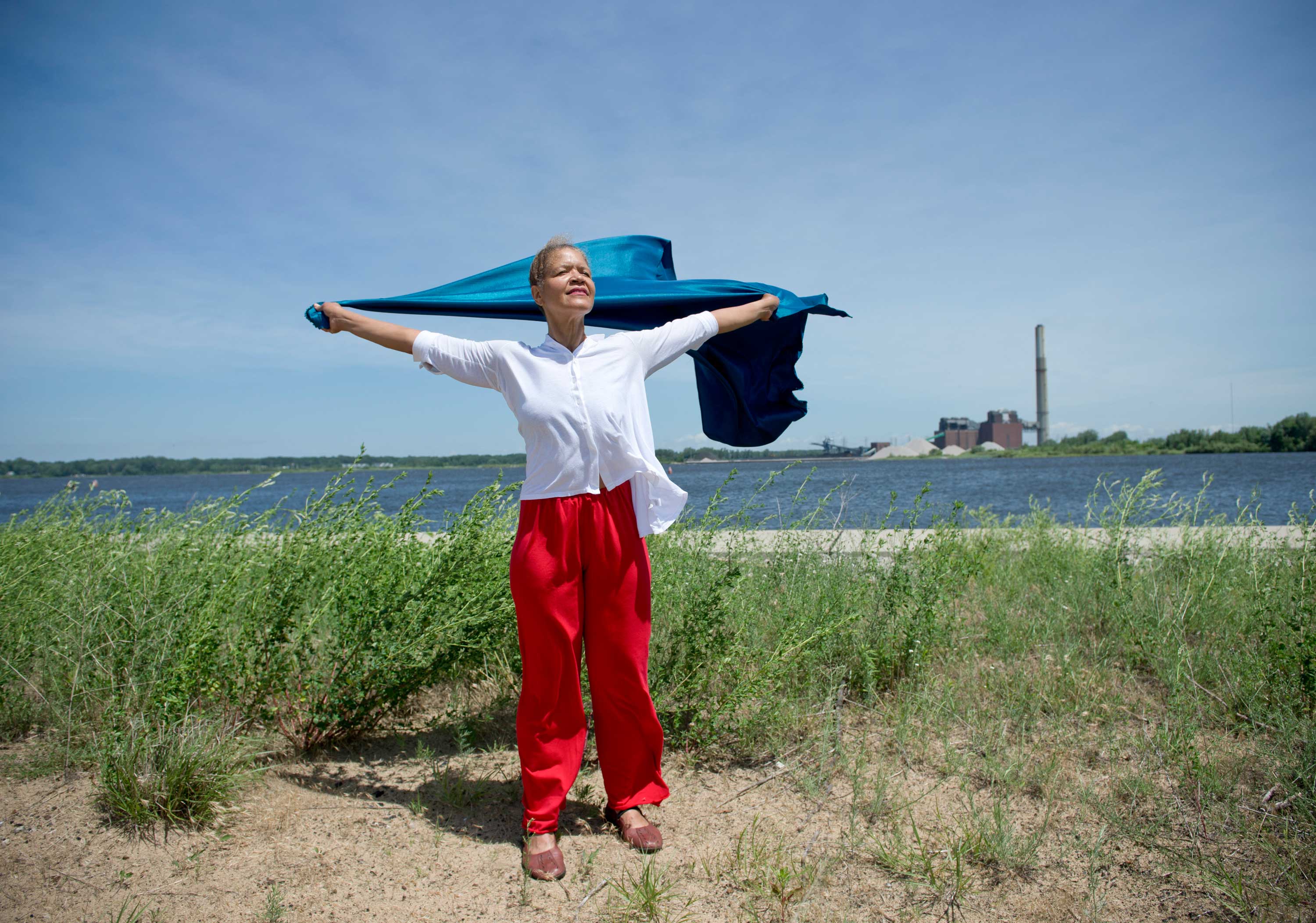 Robin Wilson, associate professor of dance, U-M School of Music, Theatre & Dance, runs through her solo for the upcoming Into the Wind performance on Muskegon Lake. ANN ARBOR—University of Michigan dance professor Robin Wilson—tonight a performer—licks her index finger and then lifts it to check the imaginary wind’s direction. This opening gesture is symbolic of the issue being explored during a special Ann Arbor Dance Works preview of a performance called “Into the Wind.”

Wilson and six students and alumni from the University of Michigan School of Music, Theatre & Dance shared the multifaceted story about the potential transformation of Muskegon, Mich., from a once-thriving manufacturing community to one that is working to regain economic prosperity, in part by exploring alternative energy industries. Like that finger in the air, those who are leading this effort are trying to determine which way the wind will blow on the somewhat controversial prospect of harnessing wind energy in the Great Lakes region.

The June preview was to share with an Ann Arbor area audience the dance, music and poetry performance that will take place in Muskegon later this summer. The free event at 7 p.m. Aug. 22 and 23 will be held at the Michigan Alternative and Renewable Energy Center on the shores of Muskegon Lake. It is the site of the former Continental Motors factory in the West Michigan community, and overlooks a coal plant that may close in 2016, costing the community more jobs and tax revenue.

“The dance looks back at the legacy of the site and looks forward to the hopes and dreams of the future,” Fogel told members of the June 12 preview audience. The score for the performance includes voices of those who worked at the plant.

“When that factory closed it was a real blow to that community,” Fogel said. “In the music for the performance, not only are you hearing the factory workers’ voices, but you are hearing a sonification of wind data collected by a buoy launched off of Lake Michigan, near the site. This data was then transformed into music by composers Robert Alexander and David Biedenbender.”

Alexander is a NASA Jenkins Pre-doctoral Fellow, sonification specialist and design science doctoral candidate at U-M, and Biedenbender was a U-M instructor who recently accepted a faculty position at Boise State University.

The event will include a new work choreographed by Grand Valley dance professor and U-M alumnus Shawn Bible and performed by Grand Valley students. Grand Valley music professor Nate Bliton will compose music for the piece, which will incorporate sounds of wind turbines. A community dialogue led by project collaborators and area alternative energy leaders will follow the performance.

“This project is not only a great way to link the performing arts with our renewable energy efforts at (Michigan Alternative and Renewable Energy Center) and in the region, but it’s also a nice opportunity to link Grand Valley and the University of Michigan in a collaboration that will allow students, faculty and the community to engage and learn from each other,” said T. Arnold Boezaart, director of Grand Valley’s Michigan Alternative and Renewable Energy Center.

In recent years, Fogel, director of Ann Arbor Dance Works, U-M’s resident dance company, has become interested in using the arts to provide stewardship for the environment. She was inspired to look into wind energy after hearing about what visual artist Sara Adlerstein, an associate research scientist at the U-M School of Natural Resources and Environment, was doing to measure the impact of wind turbines on the Saginaw Bay aquatic ecosystem. Those who oppose turbines believe they negatively impact fish and other wildlife, and therefore, food supplies. But her research shows otherwise.

“From the models I have been doing, the impact is next to nothing,” Adlerstein said, of the research in water. “People opposed to them are doing so because they think turbines are ugly—not because they aren’t good for the environment. I wanted to explore the question of beauty. How do you confront people with the idea of aesthetics?”

“We’re trying to invoke the aesthetic of wind, and of these turbines, and show how using renewable energy is beautiful, and these objects are beautiful, when viewed in the context of sustainability. So I hope that will come across to people,” she said. “More generally, I just hope people will come and see what we are capable of doing, and I hope that people have a greater appreciation of dance and the arts through this project.”

The project received funding and support from the U-M Third Century Initiative; U-M Office of Research; GVSU’s Office of the President and the Michigan Alternative and Renewable Energy Center; U-M School of Music, Theatre & Dance Faculty Research Fund; U-M Gay Delanghe Endowment; U-M Department of Dance; GVSU Department of Music and Dance; U-M Office of the Vice President for Global Communications and Strategic Initiatives; and the Muskegon Museum of Art.