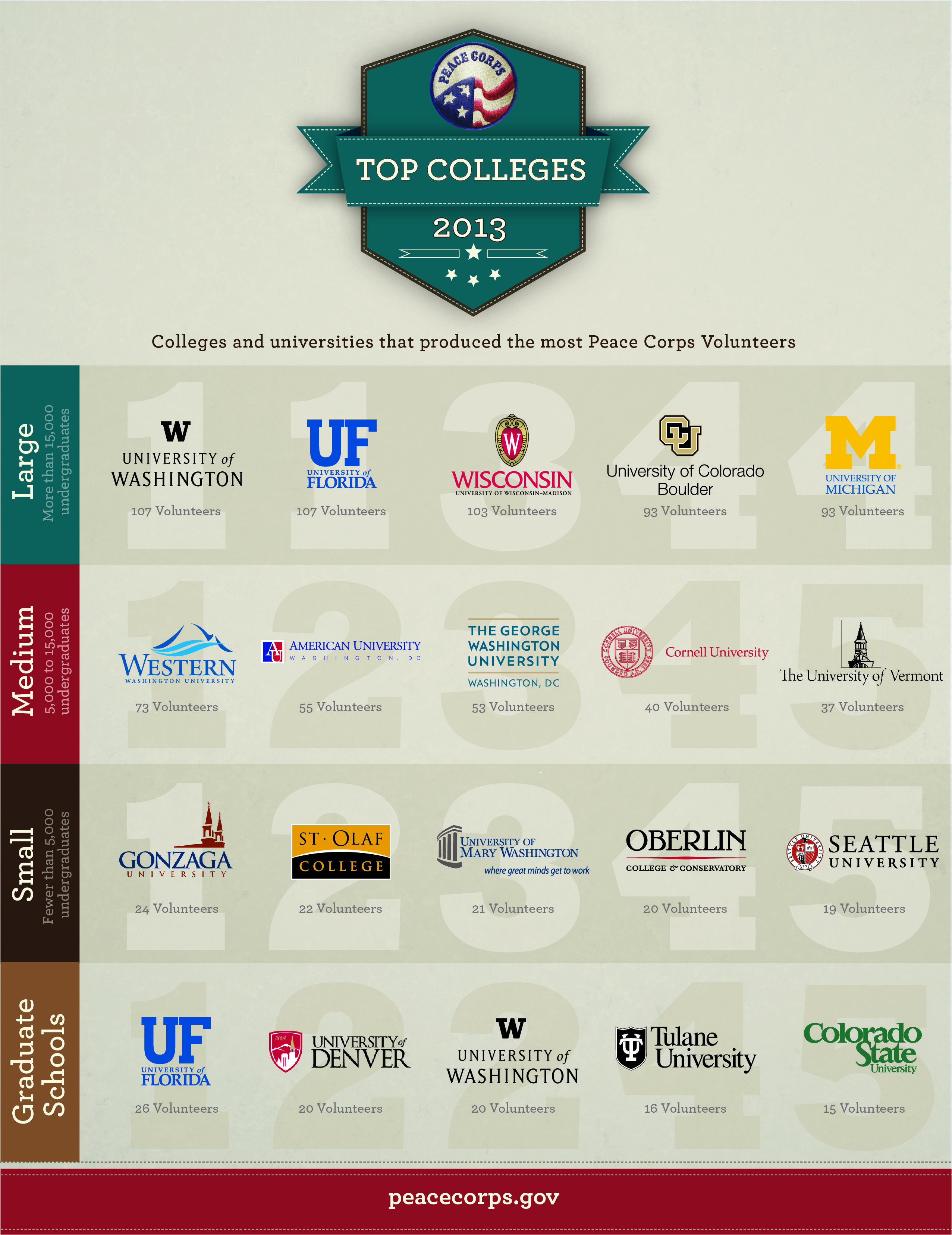 ANN ARBOR—For the thirteenth year in a row, the University of Michigan has earned a spot on the Peace Corps’ annual list of the top volunteer-producing large universities across the country.

With 93 graduates currently serving as Peace Corps volunteers, the university moves to No. 4, up a spot from last year, and remains a solid source of alumni committed to making a difference at home and abroad.

The university also reached a milestone this year, with more than 2,500 alumni having served over the history of the Peace Corps. Since the agency was created in 1961, 2,515 Michigan graduates have served overseas, making U-M the No. 4 all-time producer of Peace Corps volunteers.

The history of the Peace Corps can be traced back to U-M when, at 2 a.m. on Oct. 14, 1960, then-Sen. John F. Kennedy challenged students on the steps of the Union to give two years of their lives to help people in developing countries. University of Michigan students accepted that challenge, and a few months later, in March 1961, President Kennedy signed the executive order creating the Peace Corps.

“Every year, graduates of colleges and universities across the United States are making a difference in communities overseas through Peace Corps service,” said Carrie Hessler-Radelet, acting Peace Corps director. “As a result of the top-notch education they receive, these graduates are well prepared for the challenge of international service. They become leaders in their host communities and carry the spirit of service and leadership back with them when they return home.”

Matthew Wojcik of Grosse Ile, a Peace Corps volunteer, graduated from U-M in April 2012 with a degree in international relations and minor in environmental science. As an agriculture and nutrition volunteer in Nepal, he works to improve food security and encourage sanitation and hygiene. Wojcik was among the first group of Peace Corps Volunteers to return to Nepal when the program was reestablished last year after an eight-year absence.

“I’m very interested in indigenous communities and the rights of indigenous peoples,” said Wojcik, who was inspired by his sister, a returned Peace Corps Volunteer who served in Morocco. “I think I’d like to get involved with an organization that works for the betterment and rights protection of such groups around the world. Whatever I end up doing, I am hoping that it’ll be something that lets me travel and continue to learn about the world.”

More than 8,000 volunteers representing all 50 states and more than a thousand colleges are working with communities in 76 host countries on sustainable development projects related to agriculture, community economic development, education, environment, health and youth development..

U-M offers both Peace Corps Master’s International and Paul D. Coverdell Fellows graduate programs. The Coverdell Fellows Program offers Peace Corps volunteers who have completed their service the opportunity to earn an advanced degree from U-M in Natural Resources and Environment, Landscape Architecture, or Public Policy, with financial assistance and the chance to use their knowledge and skills in community internships as part of the program’s requirements. The University also offers Peace Corps Master’s International graduate programs – allowing students to combine Peace Corps service with graduate studies for credit – in Natural Resources and Environment, Education Studies, Social Work, and Nursing.