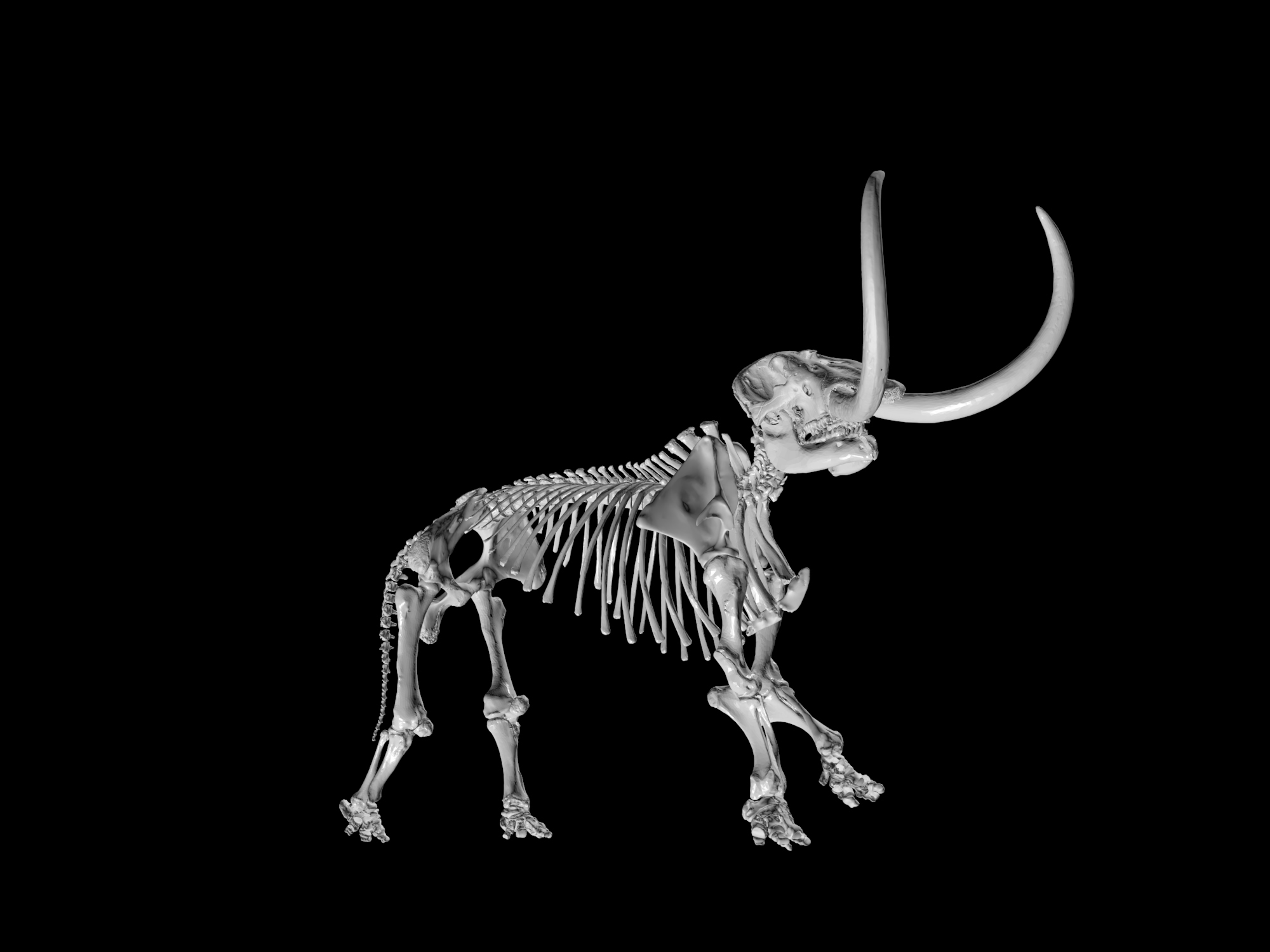 3-D digital skeleton of an adult male mastodon, part of the new University of Michigan Online Repository of Fossils website. A mounted cast of the Buesching mastodon skeleton, which is on display at the U-M Museum of Natural History, was used to align the nearly 250 bones in the 3-D digital skeleton. Image courtesy of the University of Michigan Museum of Paleontology.ANN ARBOR—More than two decades ago, University of Michigan paleontologist Daniel Fisher and some of his students began the laborious task of digitally scanning the bones of mastodons, mammoths and other prehistoric creatures so the images could be displayed on computers.

Fisher hoped to someday create a digital showcase where 3-D images of specimens from the U-M Museum of Paleontology’s vast collection could be shared with other researchers and with the general public. Sadly, the technology needed to make that dream a reality just didn’t exist at the time.

But several recent technical advances have enabled the museum to place hundreds of the scanned images on a new website called the University of Michigan Online Repository of Fossils. Initially intended as a tool to help field paleontologists identify fossils, the powerful new resource is expected to have wide appeal to students and the general public, as well, said Fisher, the museum’s director.

“None of what we’re doing now was possible when this all began,” said Fisher, who gave a presentation about the project May 5 in Greece at the VIth International Conference on Mammoths and their Relatives.

The number of 3-D bone models on the new website is expected to grow into the thousands as additional specimens are added. All of the Museum of Paleontology’s scientists and staff members contributed to the project.

“On this website we’ll be providing 3-D models that allow you to manipulate these objects onscreen and to do very much what we would do if we had the real specimen in our own hands—zoom in on it, rotate it this way and that, and even make measurements of it,” Fisher said.

The new U-M website is not the first online paleontology collection, but it has features unmatched by any previous effort. The resolution of the images is higher, and viewers have the ability to use a “BonePicker” tool to pull individual bones from a skeleton and examine photorealistic 3-D versions of those bones up close.

3-D bones from elephant-like mammoths and mastodons are available on the site, along with photo galleries of early whales and other vertebrates. Three-dimensional digital models of various ancient marine invertebrates—brachiopods, trilobites, clams, crinoids, snails and others—will be added soon. 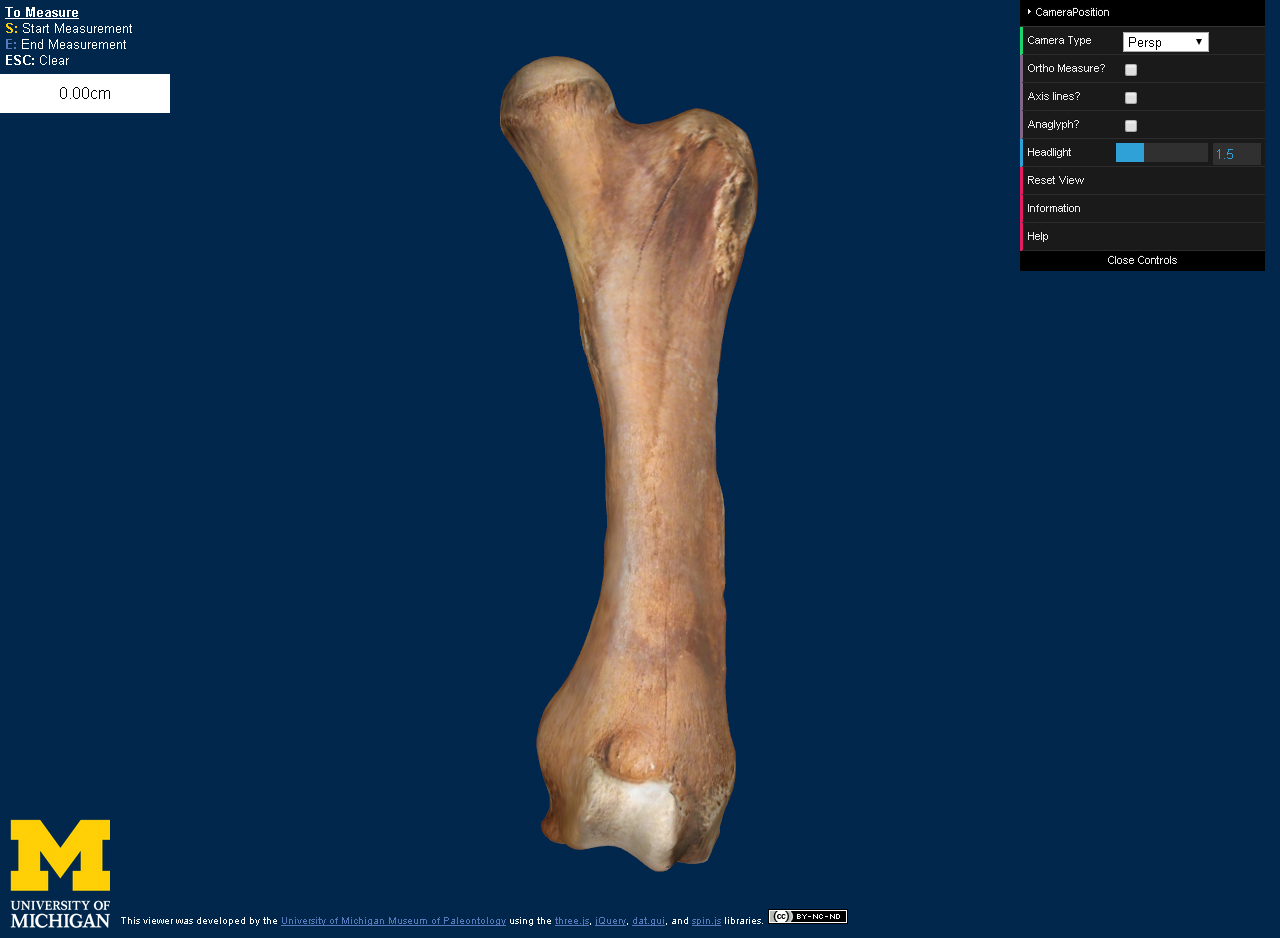 3-D digital model of a femur (thighbone) from the Buesching mastodon as it appears on the U-M Online Repository of Fossils website. Courtesy of the University of Michigan Museum of Paleontology.“In many cases, especially for smaller specimens, you can see a lot more detail on the screen than you could if you were holding it in your hand,” said Dan Miller, invertebrate paleontology collections manager at the museum. On the computer monitor in front of him is a large, crisp color image of a clam-like brachiopod that lived on the sea bottom some 390 million years ago.

“Keep in mind that this specimen, which is maybe 7 or 8 inches on the screen, is really only an inch and a half in size,” Miller said. “If I had it in my hand right now, I wouldn’t be able to see half of the detail that I see here on this screen.”

Three recent advances made the U-M project feasible, said Adam Rountrey, collections manager for vertebrates at the museum and lead developer of the digital viewer that presents the 3-D models on the website.

The advent of handheld digital scanners enabled the team to quickly capture extremely high-definition 3-D models of bones and other fossilized remains. The ability to digitally drape high-quality photographs of the bones onto the surface of the 3-D models allowed for photorealistic 3-D portrayal of specimens. And increased Web browser support for 3-D content meant that almost anyone with a computer and Internet access could view the models. 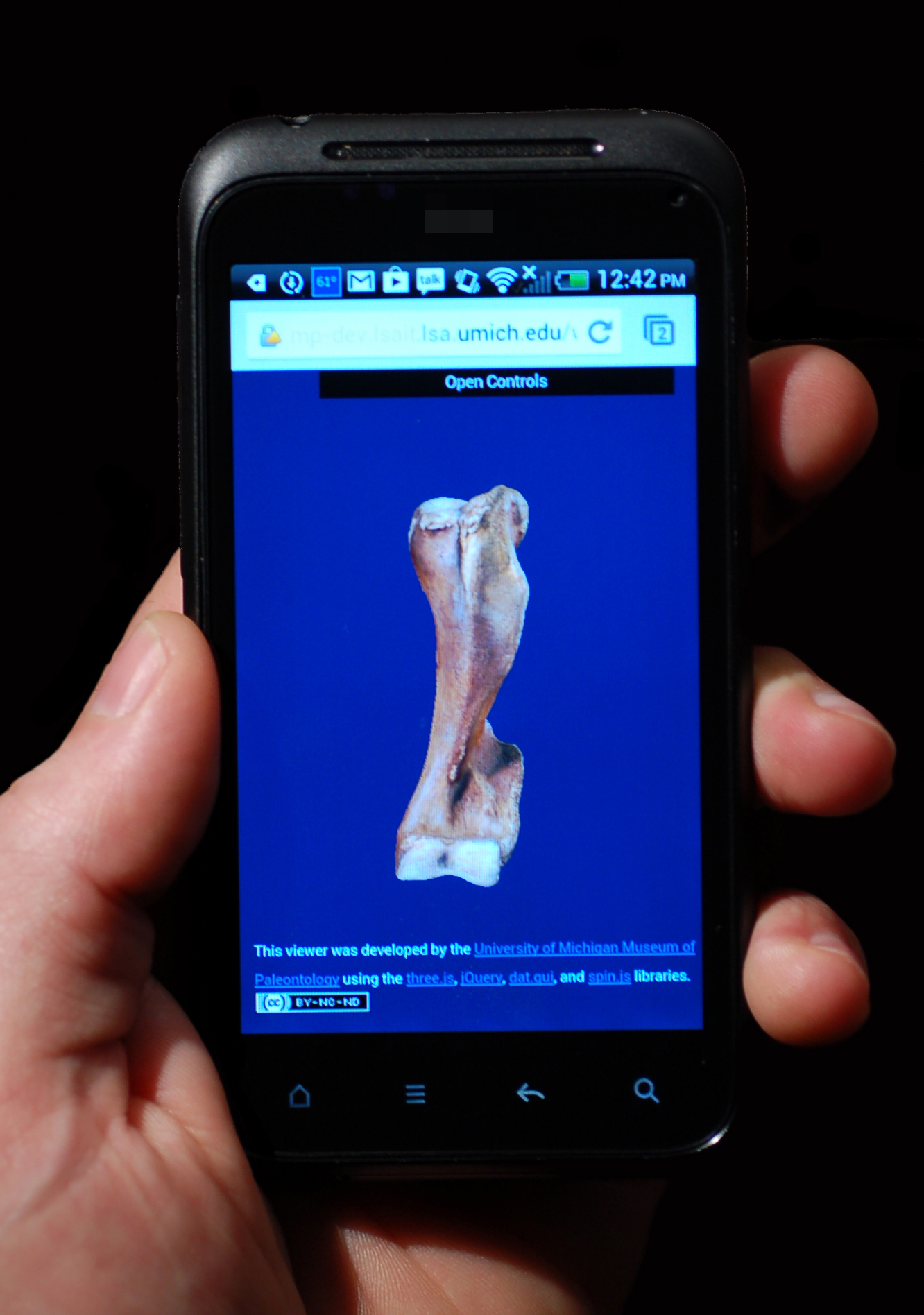 A page from the U-M Online Repository of Fossils as it appears on a cell phone. Courtesy of the University of Michigan Museum of Paleontology.The just-launched website includes a mastodon skeleton assembled from 245 bones painstakingly scanned into the computer by Fisher and his students. To help them properly align all the pieces, the researchers—with help from Brandon Walker of Midwestern Consulting—digitally scanned the mounted Buesching mastodon skeleton on display at the U-M Museum of Natural History, then used it as a guide.

Visitors to the website can double-click on any bone in the mastodon skeleton to get a separate close-up image that can be rotated, zoomed, panned and even measured.

“This will be invaluable to a researcher who has found an unidentified bone in the field,” Fisher said. “The mastodon foot has about 35 bones, and some are not very distinctive. Using this tool, you can see the structure of the whole foot, then go in and pick out an individual bone and examine it closely, then look at the next one and the next one until you figure out what you have.”

The site can also be viewed on cell phones, so a field researcher with Internet access can consult the U-M’s 3-D library without leaving the excavation site.

“Simply being able to zoom in and explore all of this anatomy is an opportunity that could easily arouse interest in young scientists-to-be,” Fisher said.