David McMillon was a middle schooler in Saginaw when he dreamed of space travel and outer space. Anthony Della Pella was working in his high school library when he found a book on theoretical math—and his direction in his educational life.

But the route to a doctorate degree in the fields of science, technology, engineering and mathematics for students like McMillon, who is Black, and Della Pella, a first-generation college graduate from River Rouge, isn’t always clear cut. 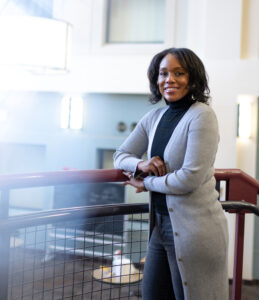 “The lack of representation we’re seeing today in many of the science, technology, engineering and math fields I don’t think is due to a lack of interest or aptitude or talent,” said Trachette Jackson, professor of mathematics at the University of Michigan. “There are some well-documented and well-researched biases, inequalities and barriers that students are facing that impact their ability and desire to persist in STEM.”

A program Jackson leads called the Marjorie Lee Browne Scholars Program is trying to change that. The U-M Department of Mathematics reimagined its master’s degree program as a stepping stone to the doctorate by providing a space where students can hone their abilities in math courses. The program, named for the first African American woman to earn a Ph.D. in mathematics at U-M in 1949, also pairs faculty mentors with the students as well as providing a network of peer mentors.

“Students often want to feel a sense of belonging, but sometimes feel unwelcome when they enter STEM education,” she said. “Sometimes students experience implicit biases from peers, instructors or research advisers, and I think those kinds of things take a toll.”

The grant aims to increase the number of students from historically underrepresented communities, including students of color and students of disadvantaged socioeconomic backgrounds. Other programs across the university include those in applied physics; business; classical studies; ecology and evolutionary biology; engineering; and molecular, cellular and developmental biology.

Even after Della Pella found that theoretical math book in high school, he didn’t envision himself attending college—nor did he visualize what could happen after earning a four-year degree. His hometown of River Rouge is a small town southwest of Detroit plagued by the loss of skilled labor jobs so many industrial towns across the country have experienced. According to the U.S. Census, per capita income between 2015 and 2019 hovered around $15,000 while median household income was around $25,000. Nearly half its residents are in poverty. 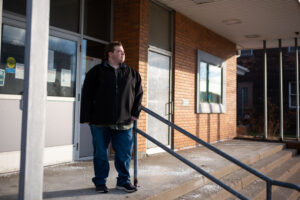 Della Pella’s father died when Anthony was very young. His mother, who later remarried, raised him on a secretary’s salary. He considered getting a regular job after high school, but ultimately enrolled at UM-Dearborn after learning more about its math program.

“At a very early age, your experience is vastly different if you’re in one of these underrepresented categories,” Della Pella said. “Then, it’s like this snowball effect. By the time you get to high school, maybe you’re not in the advanced classes, and maybe that’s because your school doesn’t offer them.”

McMillon says he was able to become involved in community programs in Saginaw that encouraged STEM participation for Black students. His experience in these programs and in elementary and middle school helped him thrive at the Saginaw Arts and Sciences Academy, a small public high school.

His family also supported his early education. McMillon’s mother is a professor who focuses on improving African American literacy and his father is a pastor. But McMillon describes systemic racism that results in financial barriers to higher education, lack of college readiness because of underfunded public school systems, and lack of access to social and support networks.

For example, while college-aged Black students represent about 16% of the U.S. population, they earn just a fraction of the degrees in the STEM fields. Black students earn less than 10% of computer science degrees; 4% of engineering, mathematics or statistics degrees; 8% of chemistry and biology degrees; 3% of physics degrees; and 2% of earth sciences degrees, according to a recent survey by the American Physical Society.

Like many new college students, McMillon found his early years at U-M difficult. In a 400-level class, McMillon ran into a professor who was, if not a mentor, at least a straight talker.

“I was doing really badly in his class, and he basically told me that if you just completely aced the final exam, you might be able to pass the class,” McMillon said. “Everything changed almost overnight. I ended up passing that class, and got my first 4.0 in the following semester.”

Bridge to the Ph.D.

Still, McMillon said his GPA likely wasn’t high enough to get into many doctoral math programs. The Marjorie Lee Browne program offered him the space to transition. 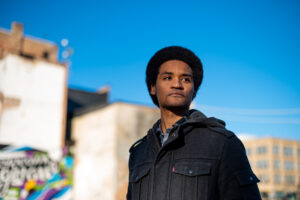 “It’s a huge jump, going from the undergraduate math degree to a math Ph.D., especially if you didn’t have certain kinds of exposure,” he said.

The program’s commitment to fully funding its students also provides a safer space for students from varying socioeconomic backgrounds. Its funding is a rarity for STEM master’s programs, and the scholars don’t need to go into debt to earn their master’s degrees. For in-state students, between summer and academic year stipends, health care and tuition, the annual value is nearly $60,000. For out of state residents, the annual value is about $83,000.

“When people have funding, the effort they put into studying is more productive,” McMillon said. “You can afford to live in an apartment that gives you peace of mind. It’s less likely to have a pest control problem, you’re more likely to eat good food. All those things seem small but are just really big when you’re trying to get through something that requires your full attention.”

The value of diverse voices

It’s these kinds of institutional barriers—barriers to education because of systemic racial and class discrimination—McMillon is hoping to address with his work, barriers that were laced through his upbringing in Saginaw.

McMillon said he saw how systemic racism affected the lives of his uncles, which sparked his desire to apply mathematical modeling to systemic racism, specifically the school-to-prison pipeline. He approached Carl Simon, co-founder of the U-M Center for Complex Systems, as well as Jeff Morenoff, research professor at the U-M Institute for Social Research and a professor of sociology and public policy. Morenoff’s research focuses on prison recidivism, among other interests. McMillon was able to pursue this idea as a doctoral student at the Harris School of Public Policy at the University of Chicago.

“My dissertation illustrates how to use systems thinking to fight against systemic disadvantage,” McMillon said. “For example, mapping out the school-to-prison pipeline as a complex system might reveal unintended consequences of well-intended potential policy solutions. This kind of mathematical modeling would also be helpful to clarify a taxonomy of what systemic racism is, its role in generating inequality and how to combat it effectively.”

McMillon was recently hired as an assistant professor of economics at Emory University and also has a visiting scholar position at the Atlanta Federal Reserve Bank.

Through the master’s program, Della Pella was introduced to another facet of math: one that intersects with computer science. As a fifth-year doctoral candidate in the U-M Department of Mathematics, he studies what are called approximation algorithms. These are problems so difficult that even a super computer can’t solve them. Instead, computer scientists have to approximate the solution—but to be sure their approximation is correct, the math has to work.

“The problem I’m currently working on is called maximal set packing,” Della Pella said. “We can think of it as trying to optimally match people up with a selection of their choices with that caveat that supply is limited and people may have overlapping preferences. A good example of this is the ‘marriage problem’—given a set of suitors each with a list of potential spouses, what is the best way to assign suitors to spouses such that the most people are happy.”

This isn’t what he envisioned his work to be as an undergraduate.

“I was originally going to pursue pure mathematics at a very small school in Texas, but I feel like my life took a much better trajectory,” he said. “In the most positive way possible, the MLB program opened up a lot of doors for me that I don’t think would have been there otherwise.”