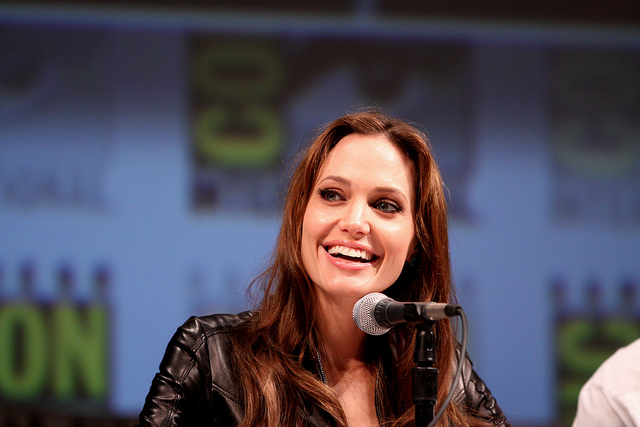 Angelina Jolie. Image credit: Gage SkidmoreANN ARBOR—Actress Angelina Jolie made headlines this week for her decision to have surgery to remove her ovaries and fallopian tubes as a means to prevent ovarian cancer.

While Jolie carried a mutation in the BRCA1 gene that puts her at exceptionally high lifetime risk of ovarian cancer, a recent study led by a University of Michigan School of Public Health researcher offers a picture of lifetime risk for this form of cancer in the general population.

Ovarian cancer is a deadly disease with a five-year survival of less than 50 percent.

The average lifetime risk of ovarian cancer is approximately 1.37 percent in non-Hispanic white women in the United States, but there are women at substantially higher and lower risk, according to the researchers, led by Celeste Leigh Pearce, associate professor of epidemiology.

And there are some patterns to show who is more at risk, and why.

Pearce and colleagues looked at 214 combinations of risk and preventative factors, including such things as first-degree family history of the disease, personal history of endometriosis, number of births, use of oral contraceptives, tubal ligation and common genetic variants (not the high risk mutations such as the one carried by Jolie, which is rare in the population).

In their analysis, the majority of women at higher-than-average risk (4 percent or greater) did not have a first-degree family history of the disease, as Jolie does, but reported having endometriosis.

Women from one profile, who had a history of endometriosis, never used oral contraceptives, never had children, did not have a tubal ligation and carried the risky version of the common genetic variants, had a 6.5 percent lifetime risk of ovarian cancer.

In fact, women with profiles putting them at the lowest lifetime risk (0.5 percent or lower) all had used oral contraceptives for five or more years, and had at least one child and no family history.

Use of oral contraceptives, removal of the fallopian tubes and tubal ligation represent drug and surgical options for preventing ovarian cancer. Recently, several gynecological professional organizations have promoted the removal of fallopian tubes in conjunction with a hysterectomy or other pelvic surgery as a means of preventing ovarian cancer in the general population.

Jolie’s surgery included removing her ovaries and fallopian tubes. The researchers wrote about the option she used, raising the question of what level of risk would warrant such a surgery:

“The precise lifetime risk at which a woman would consider an RRSO (risk-reducing bilateral salpingo-oophorectomy) is a matter to be decided by the woman in consultation with her physician. For women who are at, for example, three times the average lifetime risk of ovarian cancer (4.11 percent vs. 1.37 percent), such a discussion might be warranted.

“This type of discussion might be particularly relevant for a higher than average ovarian cancer risk woman who is having a hysterectomy and considering also undergoing a salpingectomy and/or oophorectomy.”

The research appears in the online first edition of the American Association for Cancer Research Cancer, Epidemiology, Biomarkers and Prevention.