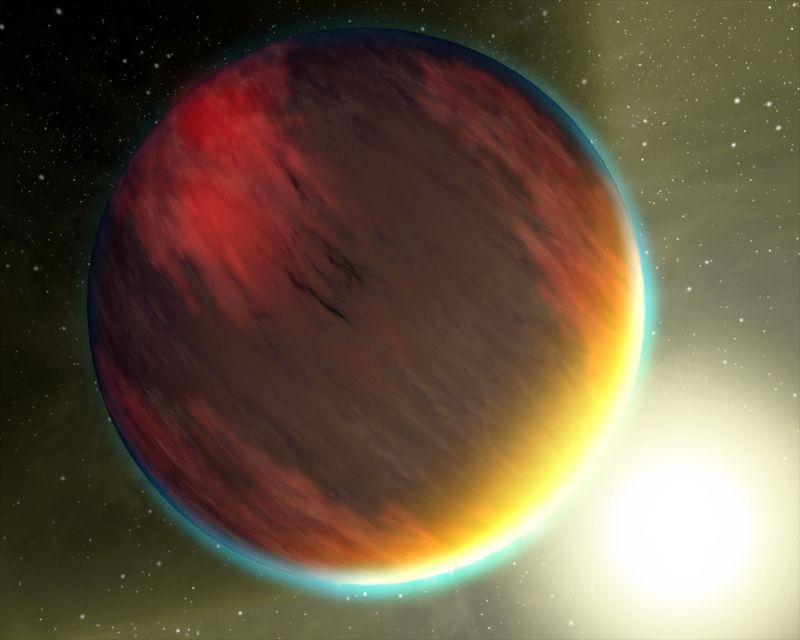 An international team of scientists is the first to directly measure the precise amount of both water and carbon monoxide in the atmosphere of a planet in another solar system roughly 340 light years away.

There are thousands of known planets outside of our own solar system, called exoplanets. Scientists use both space telescopes and ground-based telescopes to examine how these exoplanets form and how they are different from the planets in our own solar system. For this study, the team focused on planet “WASP-77Ab,” a type of exoplanet called a “hot Jupiter” because they are like our solar system’s Jupiter, but with a temperature upwards of 2,000 degrees Fahrenheit.

They then focused on measuring the composition of its atmosphere to determine what elements are present, compared to the star it orbits.

“Because of their sizes and temperatures, hot Jupiters are excellent laboratories for measuring atmospheric gases and testing our planet formation theories,” said researcher Michael Line of Arizona State University.

University of Michigan astronomer Emily Rauscher, a co-author of the study, says knowing the amount of carbon and oxygen in a hot Jupiter’s atmosphere allows the researchers to work backward to determine how the planet formed and evolved in order to produce an atmosphere of this particular composition.

The team, using the ground-based Gemini Observatory telescope in Chile, has published its results in the journal Nature.

“This being the first time we’ve measured both carbon and oxygen together—not just one or the other, but both of them together—provides the best end point that theories of formation and evolution then have to try to match,” Rauscher said. 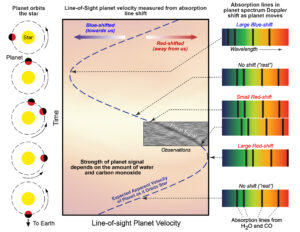 Illustration of how information about the planetary atmosphere is extracted from the observations. Image credit: P. Smith/M. Line/S. Selkirk/ASU

To determine what elements comprise these planets’ atmospheres, scientists study the light from exoplanets with space-based telescopes such as the Hubble Space Telescope, or ground-based instruments such as the Gemini Observatory telescopes.

The team used the Hubble instruments to measure water vapor. Based on that measurement, the team estimated the oxygen abundance of the planet’s atmosphere.

To measure carbon, they needed to turn to the Gemini South telescope. Gemini South is an 8.1-meter-diameter telescope located on a mountain in the Chilean Andes called Cerro Pachón, where very dry air and negligible cloud cover make this a prime telescope location. It is operated by the National Science Foundation’s NOIRLab, or National Optical-Infrared Astronomy Research Laboratory.

Using the Gemini South telescope, with an instrument called the Immersion GRating INfrared Spectrometer, the team observed the thermal glow of the exoplanet as it orbited its host star.

Like weather and climate satellites that are used to measure the amount of water vapor and carbon dioxide in Earth’s atmosphere, scientists can use spectrometers and telescopes, like IGRINS on Gemini South, to measure the amounts of different gases on other planets. In this case, they used IGRINS to measure both carbon, via carbon monoxide, and oxygen, via water, on WASP-77Ab.

Rauscher specializes in the technique the team used to measure carbon and oxygen in the planet’s atmosphere. The technique reads the spectra of these gases in order to determine what they are.

“The fundamental problem when you’re trying to measure the property of these planets is they sit so close to their star, are so far away and are so much dimmer than their star,” she said. “Because of this, you can’t make an image and see the planet separately.”

To do this, the researchers needed a very high resolution spectrum, which they obtained from IGRINS on Gemini South. And with clear measurements of both water and carbon monoxide in the atmosphere of WASP-77Ab, the team was then able to estimate the relative amounts of oxygen and carbon in the exoplanet’s atmosphere.

“The reason I’m so excited about this technique is because my particular specialty is the three-dimensional modeling of planet atmospheres,” Rauscher said. “With this technique, what you’re fundamentally measuring is the velocity, the motion of the planet. The atmosphere itself is also in motion, and so at the bleeding edge of what this technique can do is that you can measure the winds and rotation rates of the planet’s atmosphere as well.”

Obtaining ultra-precise gas abundances in exoplanet atmospheres is not only an important technical achievement, especially with a ground-based telescope, it may also help scientists look for life on other planets.

“This work represents a pathfinder demonstration for how we will ultimately measure biosignature gases like oxygen and methane in potentially habitable worlds in the not too distant future,” Line said.