ANN ARBOR—Researchers at the University of Michigan have been awarded a three-year, $3 million grant from the Erb Family Foundation to determine the Detroit River’s contributions to algae blooms that plague Lake Erie each summer.

The grant to the U-M Water Center will also allow scientists to measure the effectiveness of “green infrastructure” projects in Detroit designed to manage stormwater overflows, which can send algae-promoting phosphorus into the Detroit River and western Lake Erie during large storms.

“This grant to the Water Center continues the Erb family’s long history of support for sustainability initiatives, Great Lakes health and the University of Michigan,” said U-M Provost Martha Pollack. “The knowledge gained from this project, in particular, will help promote the environmental health of Detroit. The University of Michigan and the Erb Family Foundation share a deeply rooted and unshakable commitment to that long-term goal.” 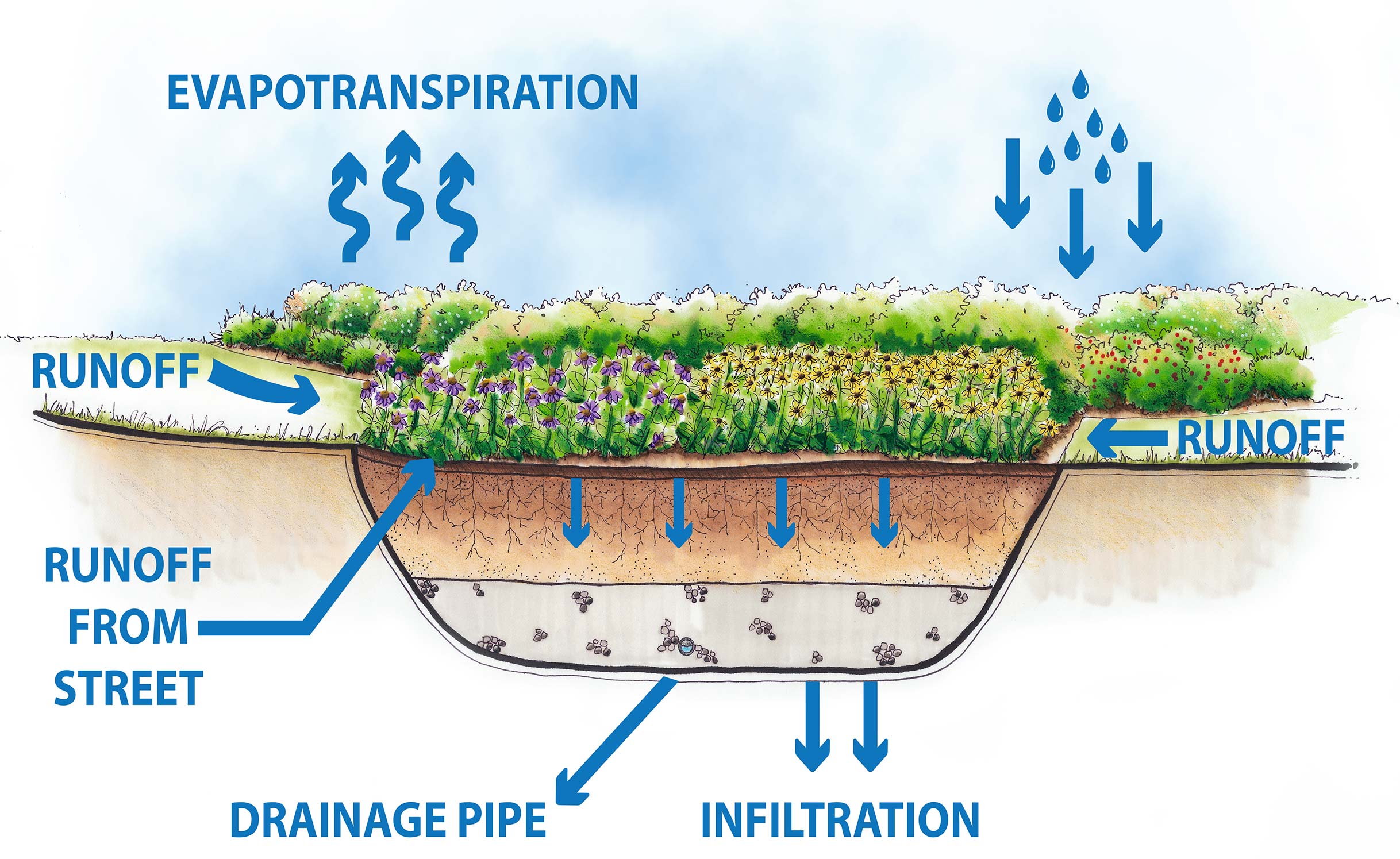 Cross-section of one of four “bioretention flower gardens” under construction in Detroit’s Cody Rouge neighborhood. The gardens will soak up and store storm water to help reduce overflows during large storms. Image credit: Tetra TechToxin-forming algae blooms have become an annual problem in Lake Erie. In August 2014, microcystin toxins shut down the drinking water supply to more than 400,000 Toledo-area residents for a weekend, and this year’s toxic bloom has been particularly large.

Phosphorus is a nutrient that stimulates algae growth. Most of the efforts to control Lake Erie’s algae problem have focused on reducing the levels of phosphorus-containing crop fertilizers that enter western Lake Erie from the heavily agricultural Maumee River watershed.

But the Detroit River carries about 80 percent of the water that enters Lake Erie and contributes an estimated 40 to 50 percent of the phosphorus in the lake’s western basin, according to a 2014 report from the International Joint Commission.

To help fill that knowledge gap, U-M researchers will use computer models that simulate hydrology and water quality in the Detroit River watershed to calculate the contributions of various upstream phosphorus sources, both urban and agricultural. 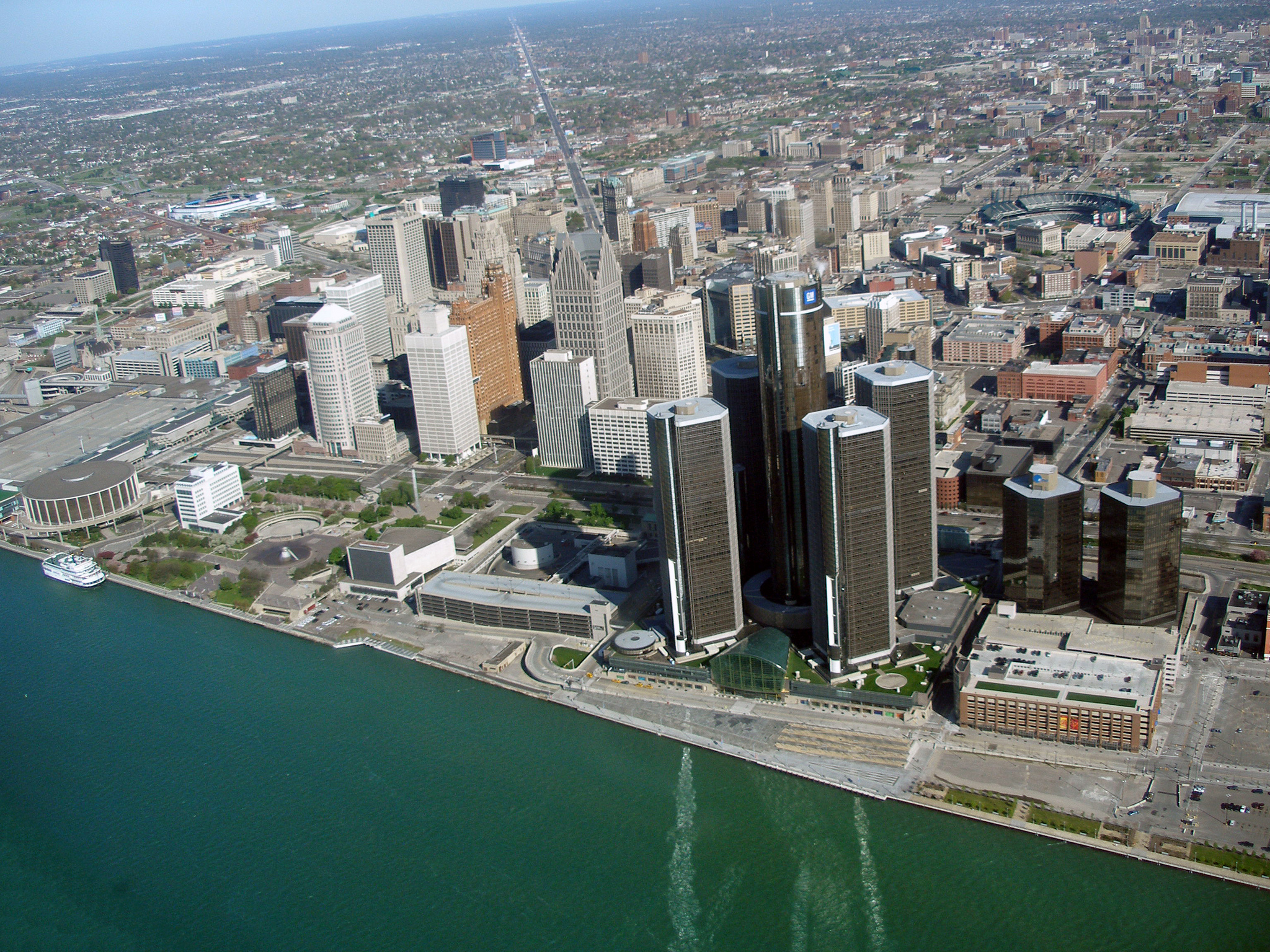 “The binational policy and management community, including regional NGOs and watershed decision makers, will have a clear understanding of the relative contributions of agricultural and urban sources to Lake Erie nutrient loading,” said Jennifer Read, director of the U-M Water Center and project manager of the new initiative. The Water Center is part of the Graham Sustainability Institute.

Urban contributions to Detroit River phosphorus include surges of stormwater during events called combined sewer overflows. A CSO occurs when the flow in combined sewers, which carry both surface runoff and sewage, exceeds the capacity of a city’s wastewater treatment plant. When that occurs, some of the combined stormwater and sewage is discharged untreated into an adjacent water body.

U-M landscape architect Joan Nassauer, a professor in the School of Natural Resources and Environment, leads a pilot project to design and build new forms of green infrastructure on vacant properties in Detroit’s far-west-side Cody Rouge neighborhood. Four “bioretention gardens” that capture and hold stormwater are under construction now on sites where abandoned Cody Rouge homes were razed.

The current project is funded by the U-M Water Center and the Detroit Water and Sewerage Department in partnership with the Detroit Land Bank Authority. Collaborators include the Cody Rouge Action Alliance and the Warrendale Neighborhood Organization. 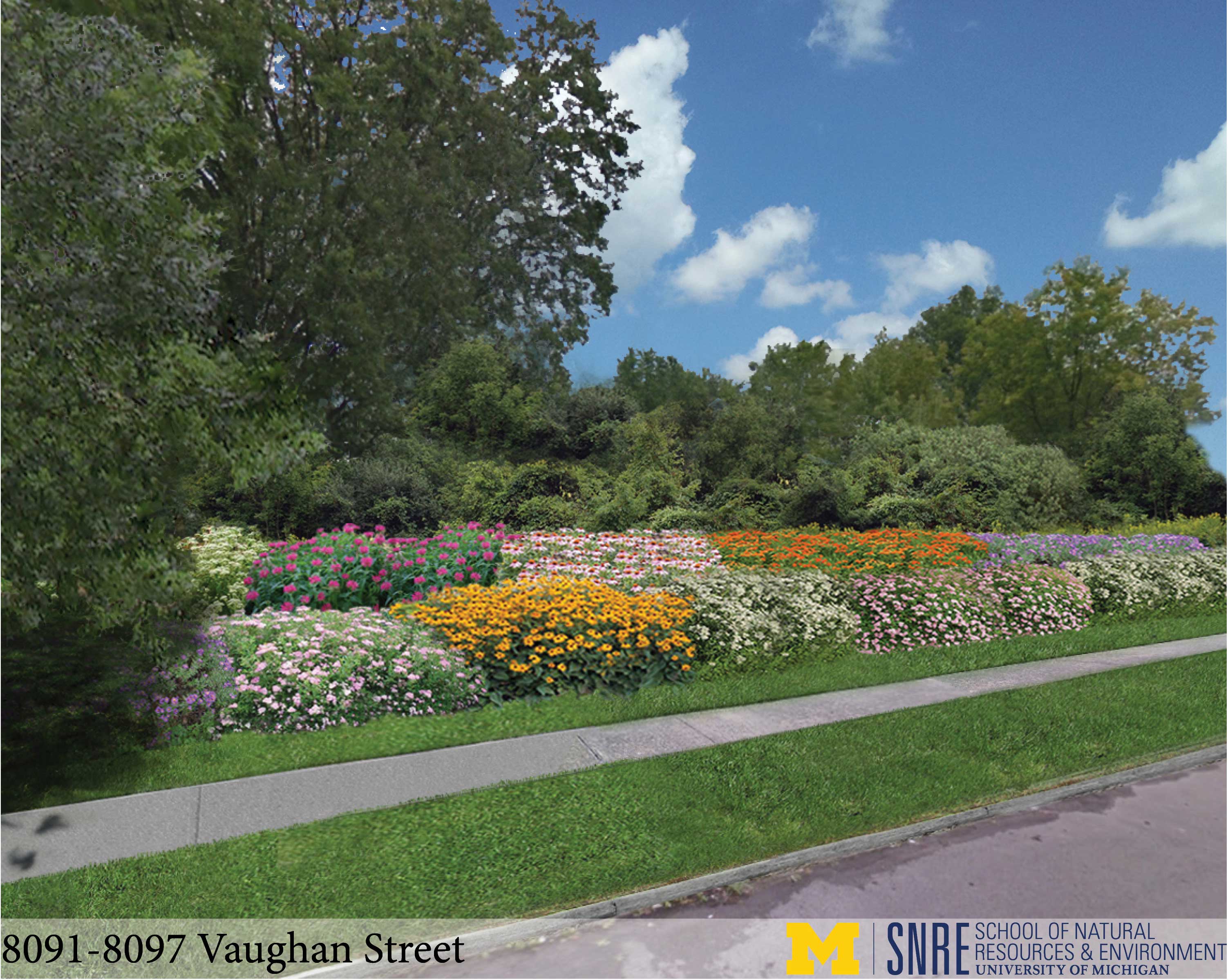 Artist’s rendering of a completed “bioretention flower garden” in Detroit’s Cody Rouge neighborhood. The gardens will soak up and store storm water to help reduce overflows during large storms. Image credit: University of Michigan/SNREThe new Erb grant will allow Nassauer’s interdisciplinary team to assess the performance of the bioretention gardens over time, to monitor the acceptance and understanding of those structures by neighborhood residents, and to develop new green infrastructure design concepts tailored specifically for use in Cody Rouge. The neighborhood is in the watershed of the Rouge River, which flows into the Detroit River, which empties into western Lake Erie.

“Plans to adopt green infrastructure as a fundamental component of Detroit’s stormwater management system are well under way,” Nassauer said. “However, decision makers and stakeholders see the need for greater knowledge about how these systems will perform.

“This grant will enable us to make the essential measurements of green infrastructure performance over time and to use what we learn to help new forms of GI perform even better.”

The new $2,994,000 grant is the latest in a series of partnerships between U-M and the Erb family on environmental and sustainability initiatives.

In 2012, a $4.5 million grant from the Erb Family Foundation helped establish the university’s Water Center. Some of that funding helped launch Nassauer’s Cody Rouge project.

In 1996, an endowment gift of $5 million established the Frederick A. and Barbara M. Erb Institute for Global Sustainable Enterprise at U-M, a joint venture between the Stephen M. Ross School of Business and SNRE. The Erb gift, eventually totaling $20 million, represented the largest known commitment to a university for interdisciplinary teaching and research in the area of global sustainable enterprise.

“The U-M Water Center has demonstrated a policy-relevant, user-oriented approach to scientific research that is rare in academia,” said John Erb, president of the Bloomfield Hills-based Erb Family Foundation. “We are pleased that our new grant will help fill key science gaps related to algal blooms in Lake Erie and the social and ecological impacts of green infrastructure in residential urban neighborhoods.”

The Fred A. and Barbara M. Erb Family Foundation’s mission is to nurture environmentally healthy and culturally vibrant communities in metro Detroit and support initiatives to restore the Great Lakes ecosystem. The foundation is focused on improving water quality, especially in the watersheds impacting metropolitan Detroit and Bayfield, Ontario; promoting environmental health, justice and equitable development; and supporting the arts as a means to strengthen the metropolitan Detroit region.